I’ve kicked the “move stuff every Saturday” mantra that I proclaimed in the {Part One} post and have moved at least four or five boxes of stuff to the house every single time I go over there (which is about three days a week not counting the weekend). So, as this information would imply, I’ve been doing a LOT of packing, moving and unpacking.

Despite the huffing, puffing and constant to-do list that can’t be slowed down now that it’s begun, I am really happy to have things in motion and well on their way to being DONE. Oh, how I can’t wait for this process to be over, to settle in and breathe again…I feel like it’s been a while since the two of us just relaxed and enjoyed each other.

But anyway, here’s {Part Two/Seven} for your viewing frenzy 😉

This was my car packed to the brim (well almost…) parked outside the house the other day: 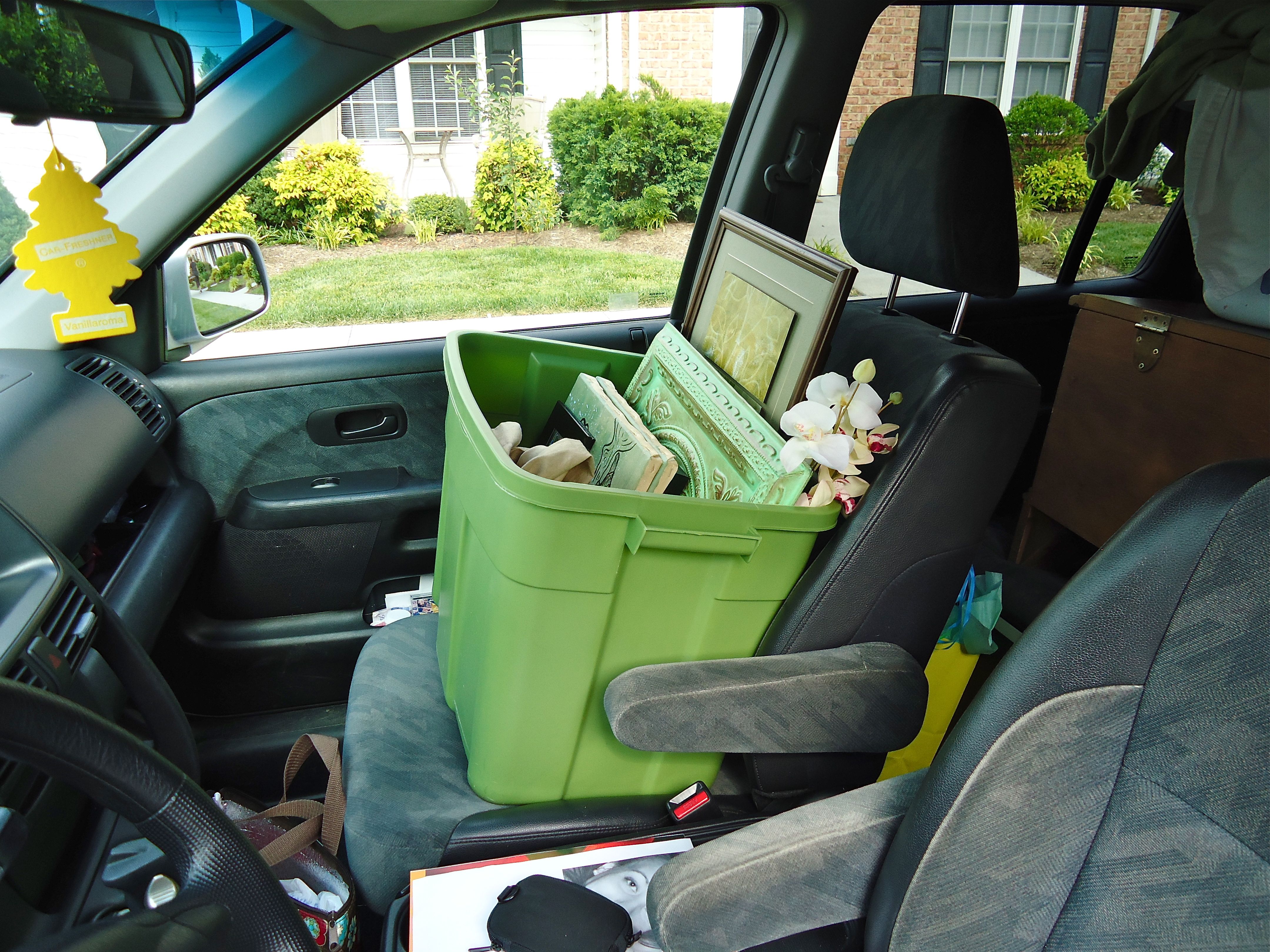 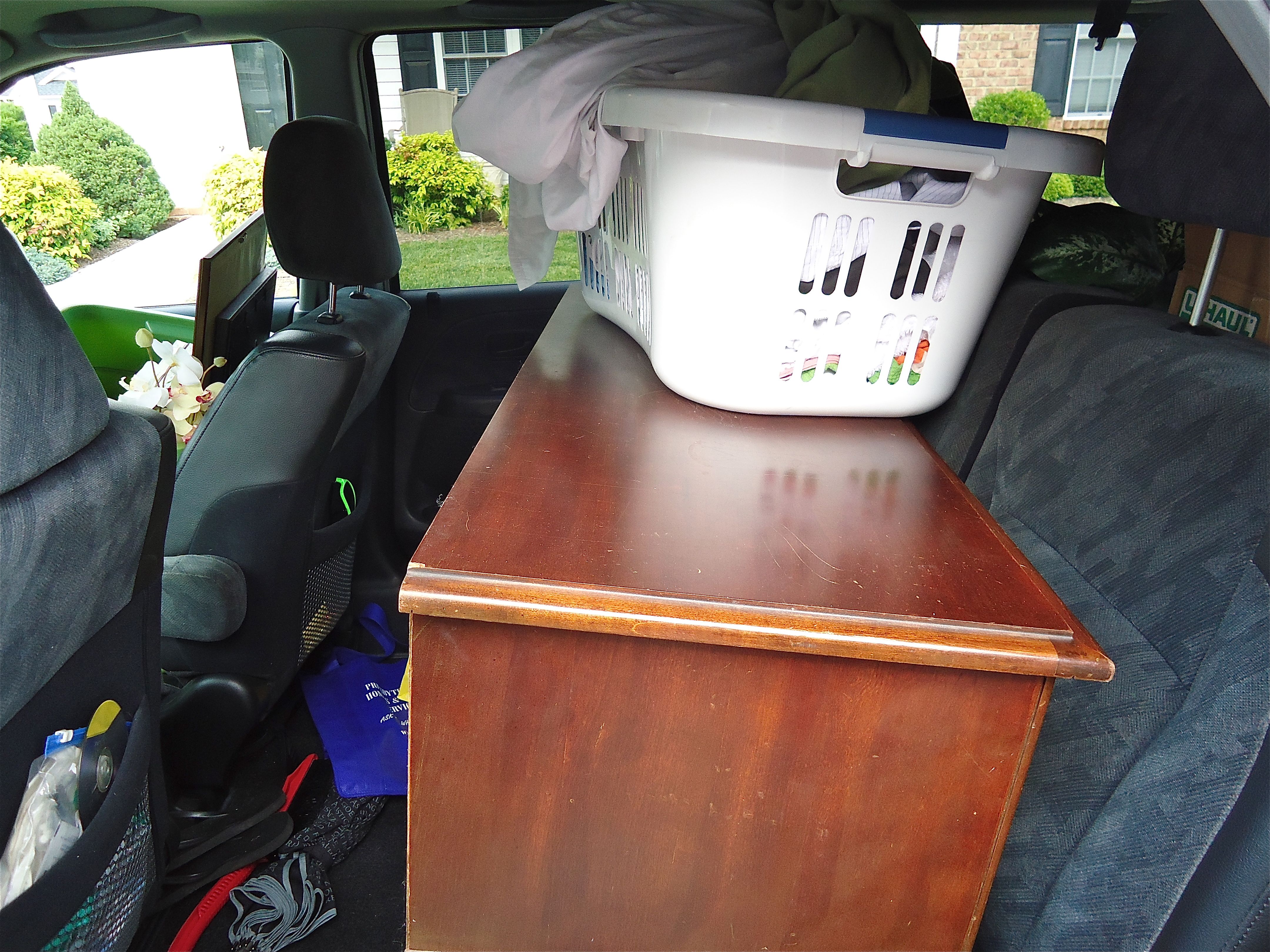 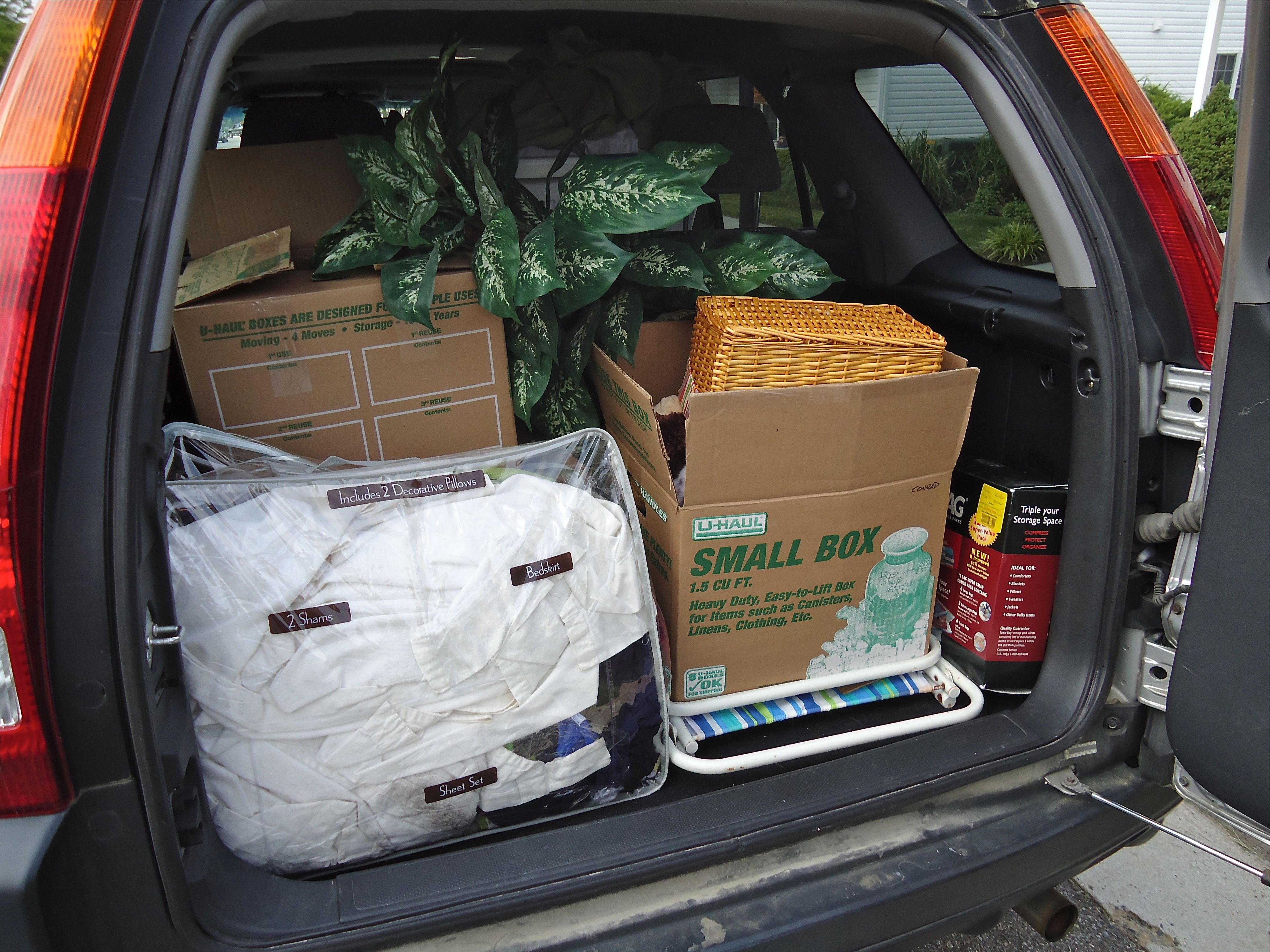 We’ve got a bench/trunk, curtains, art work, books, baskets, clothes, silk flowers and house plants (I know it’s lame but I think flowers add SO much home-y-ness to a room, and since I have NO green thumb I go for the kind that never die!) among other things.

Since John was out at an appointment, I had to move it all in by myself…But I can admittedly use the exercise. So I carted it all inside, putting everything into the living room first: 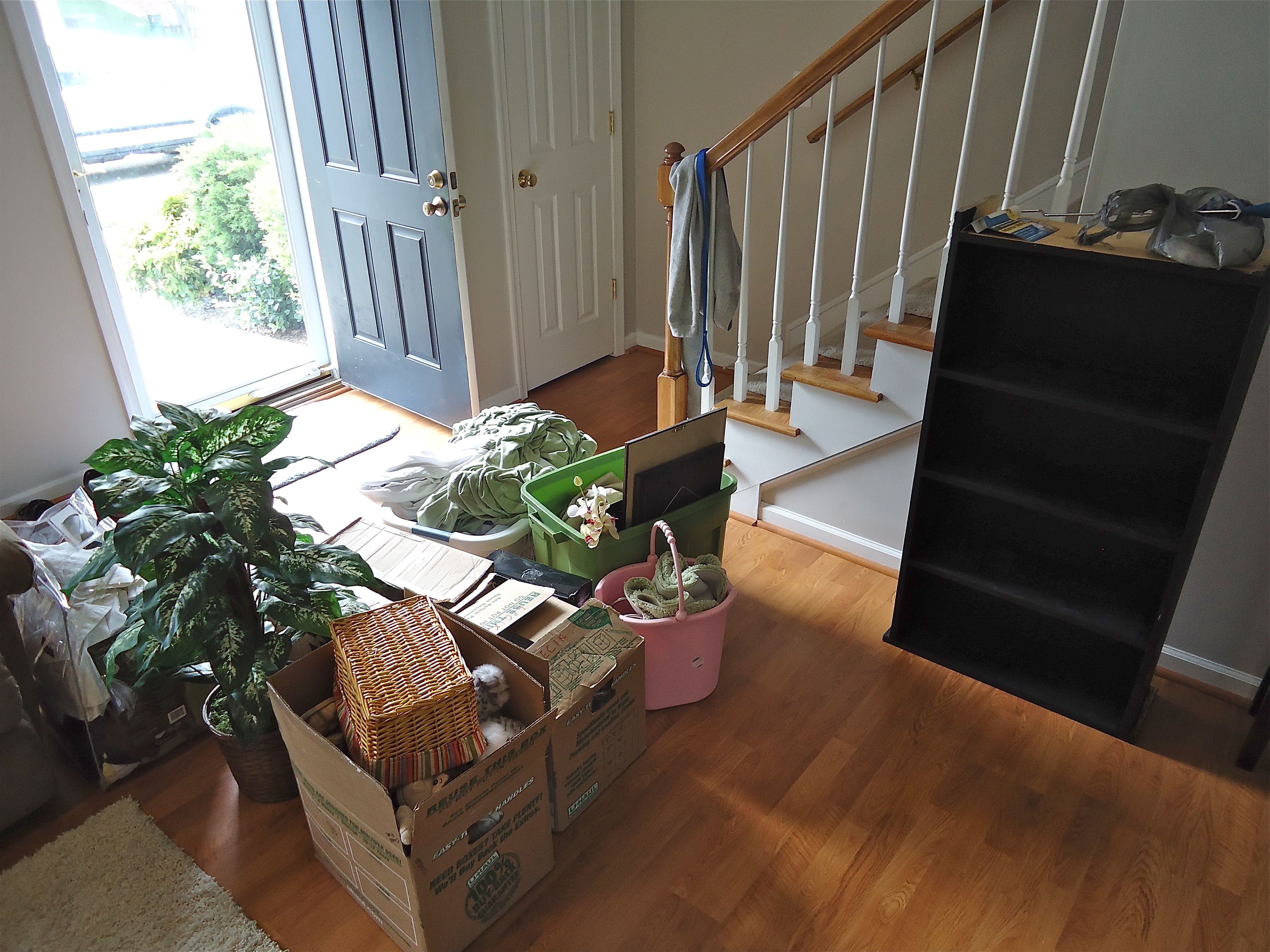 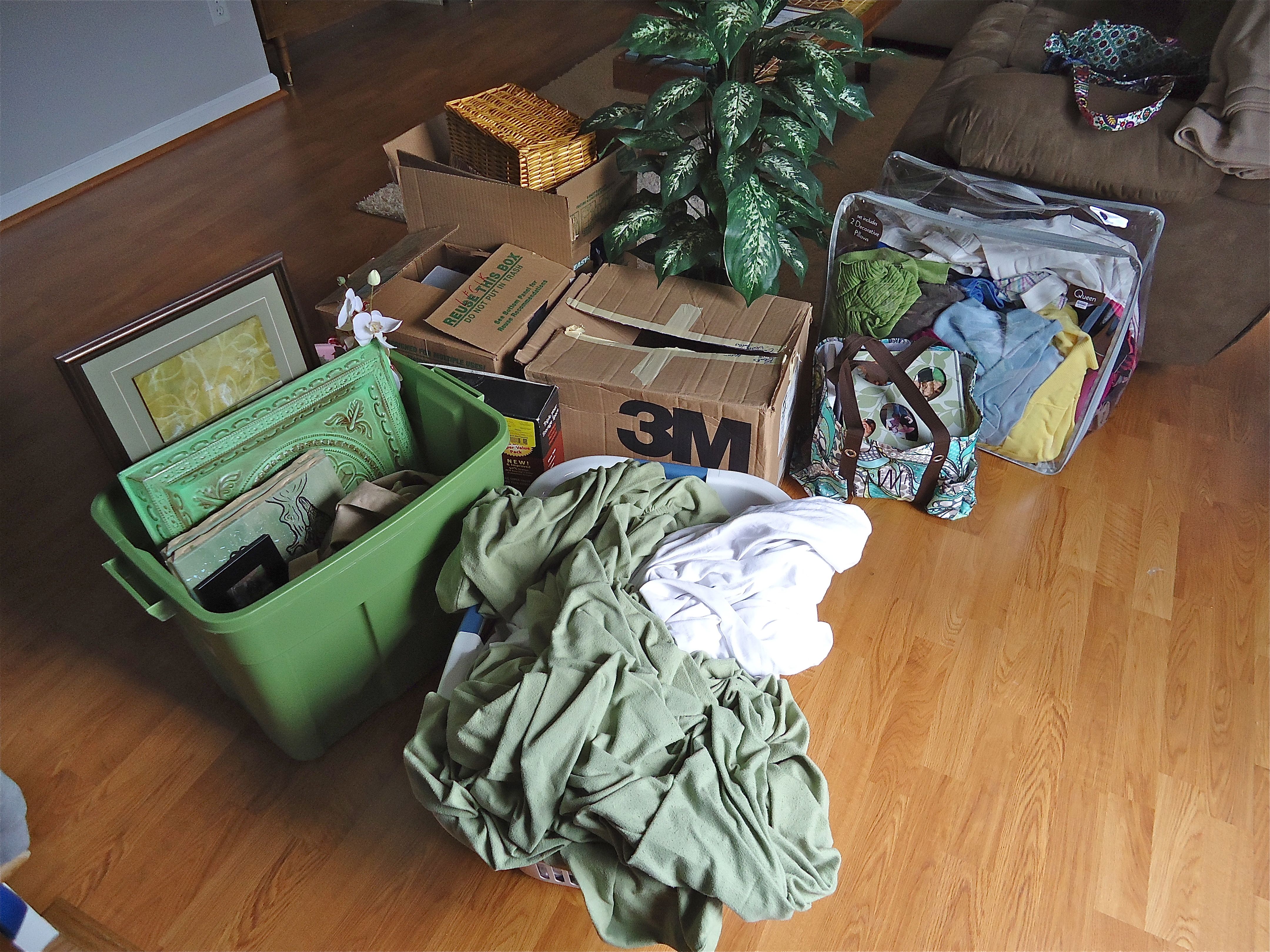 …and then heaving everything up the stairs to the studio: 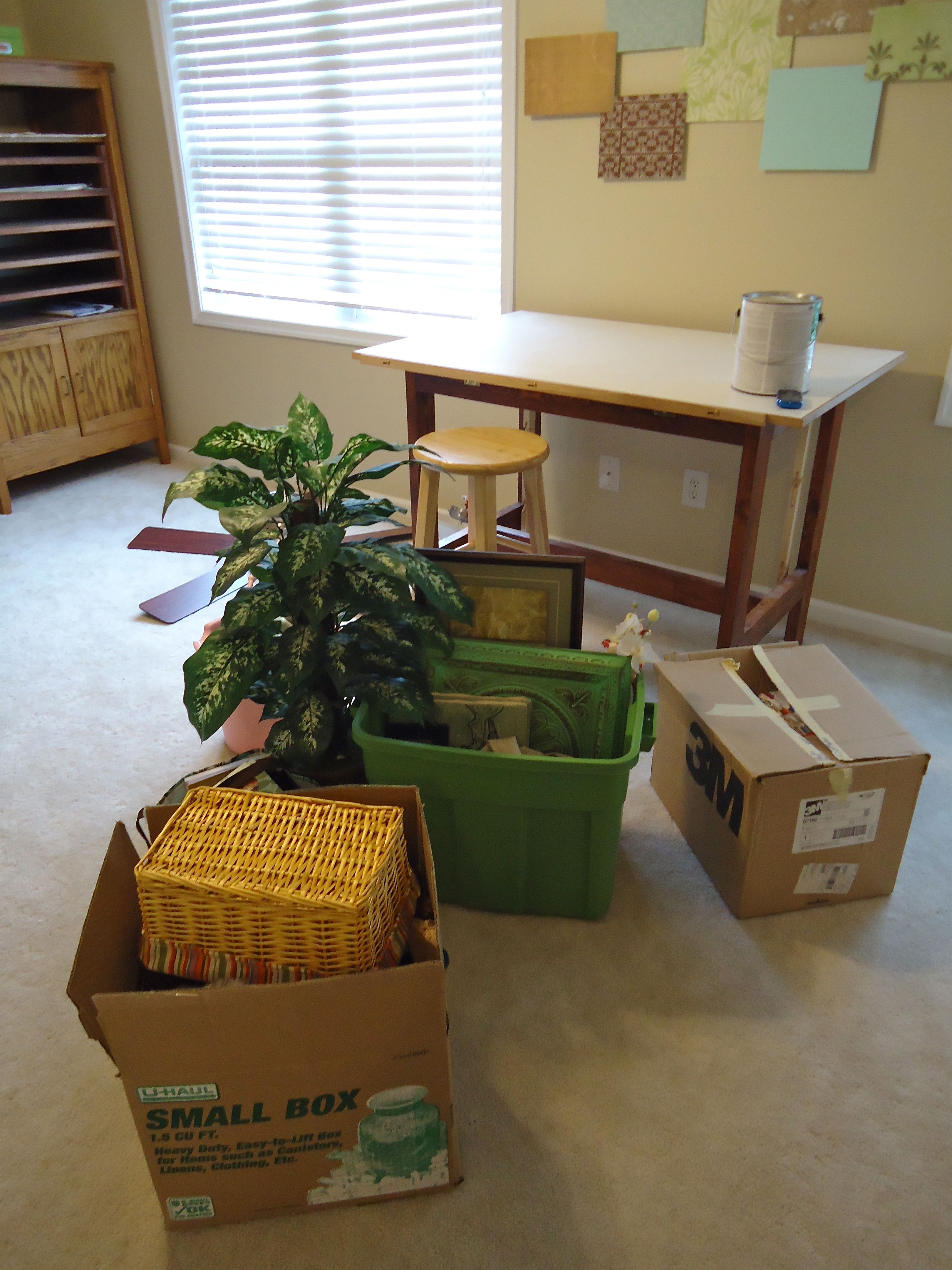 It doesn’t seem like much visually, but physically it felt like I was moving mountains – Did I mention that I could use the workout? Luckily everything fit easy-peasy into the studio and linen closets!

We’ll start with the main closet in the studio (because you know I like to be extra thorough in my explanations/visuals…) – I am astounded EVERY single time I move stuff into this room by how much the big closet holds. I have a feeling that my two shelving units (yes, I bought a second one after getting the first) have really saved the day. They hold quite a lot of stuff and actually have room for MORE! Although that existing top wire shelf is looking a little over-used…I’m sure I’ll be rearranging and reorganizing after all is in and settled. 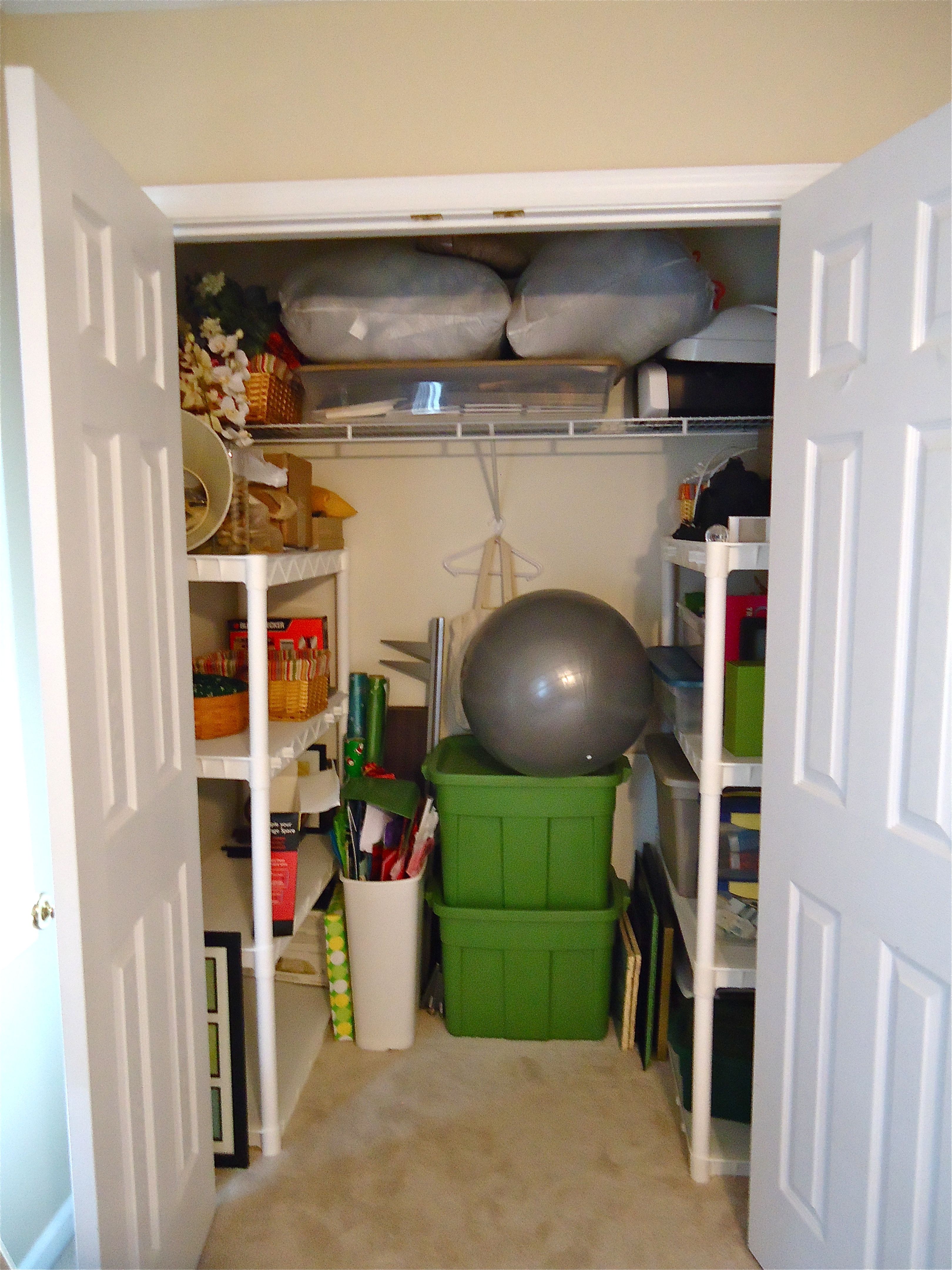 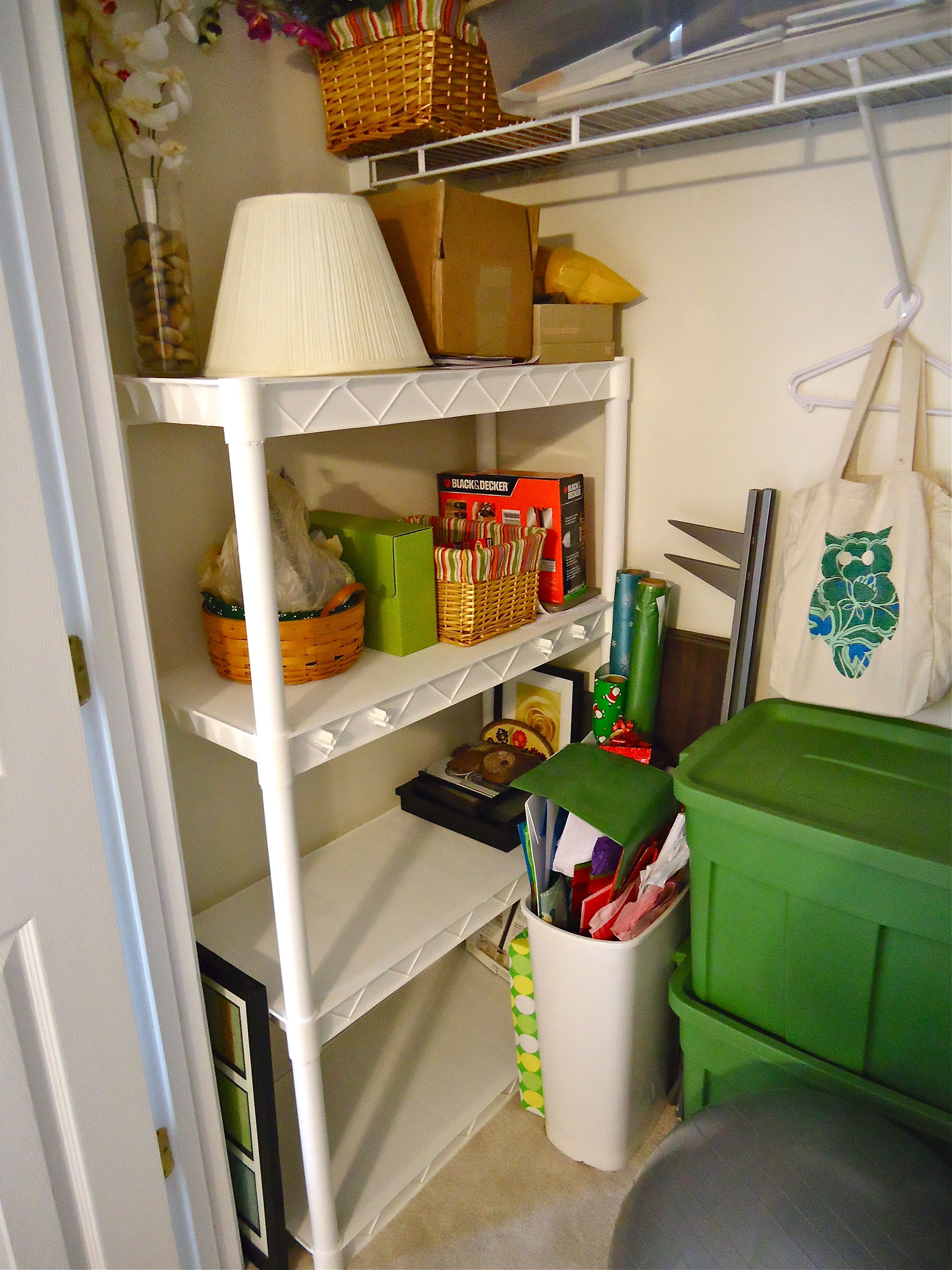 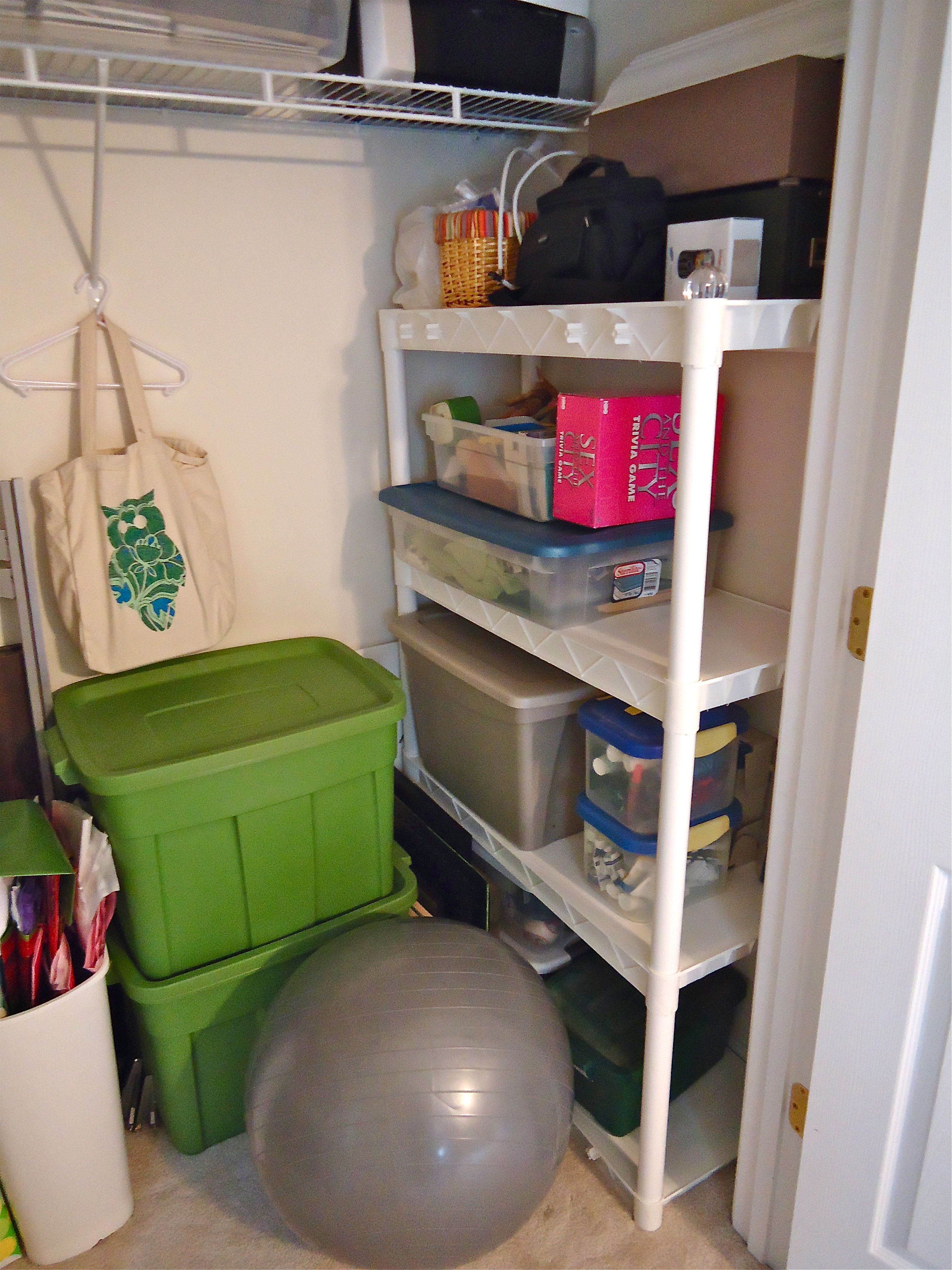 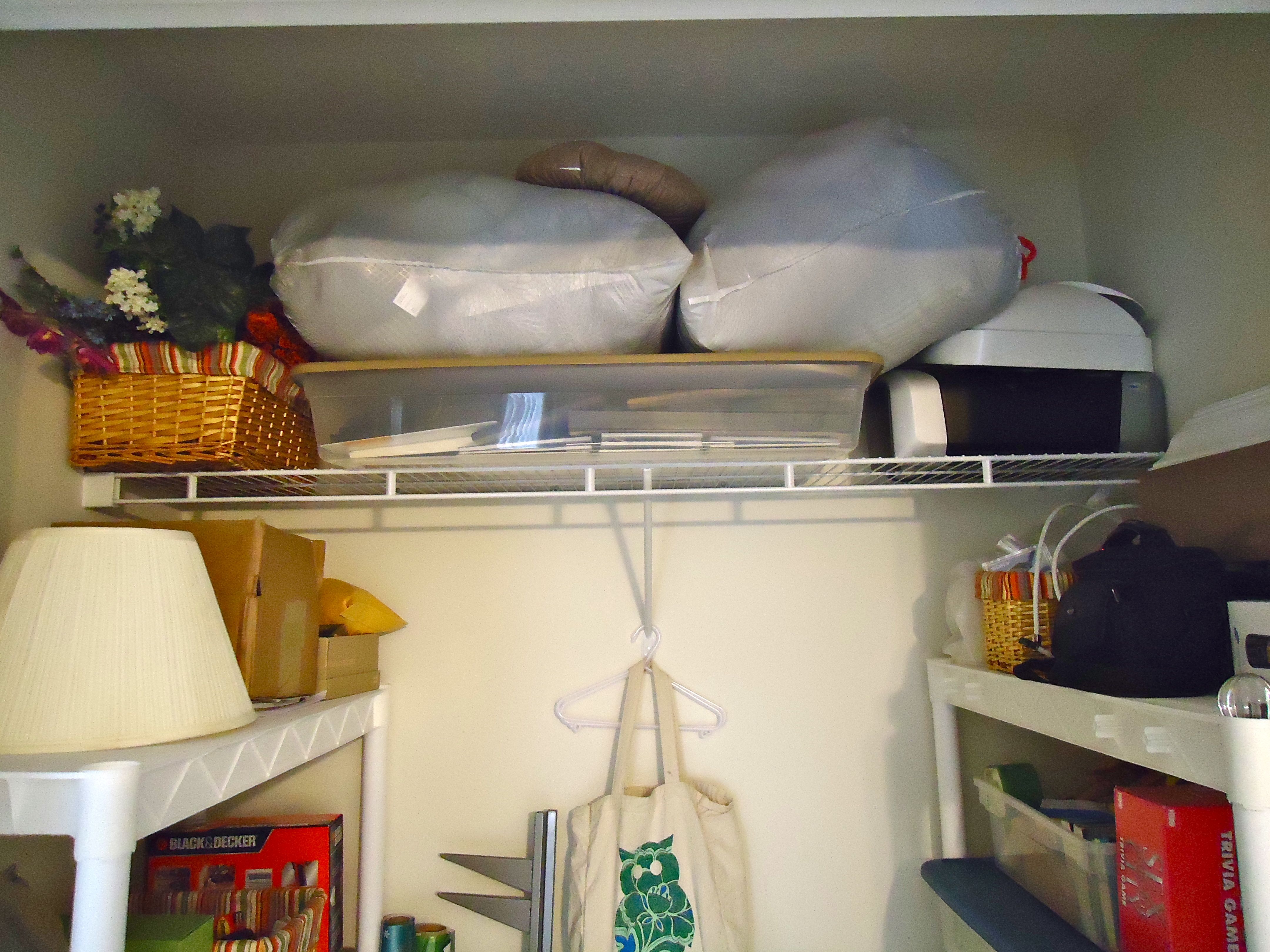 And the linen closet is also note-worthy in its ability to pack stuff away! Remember what it looked like in yesterday’s post? Here’s a reminder: 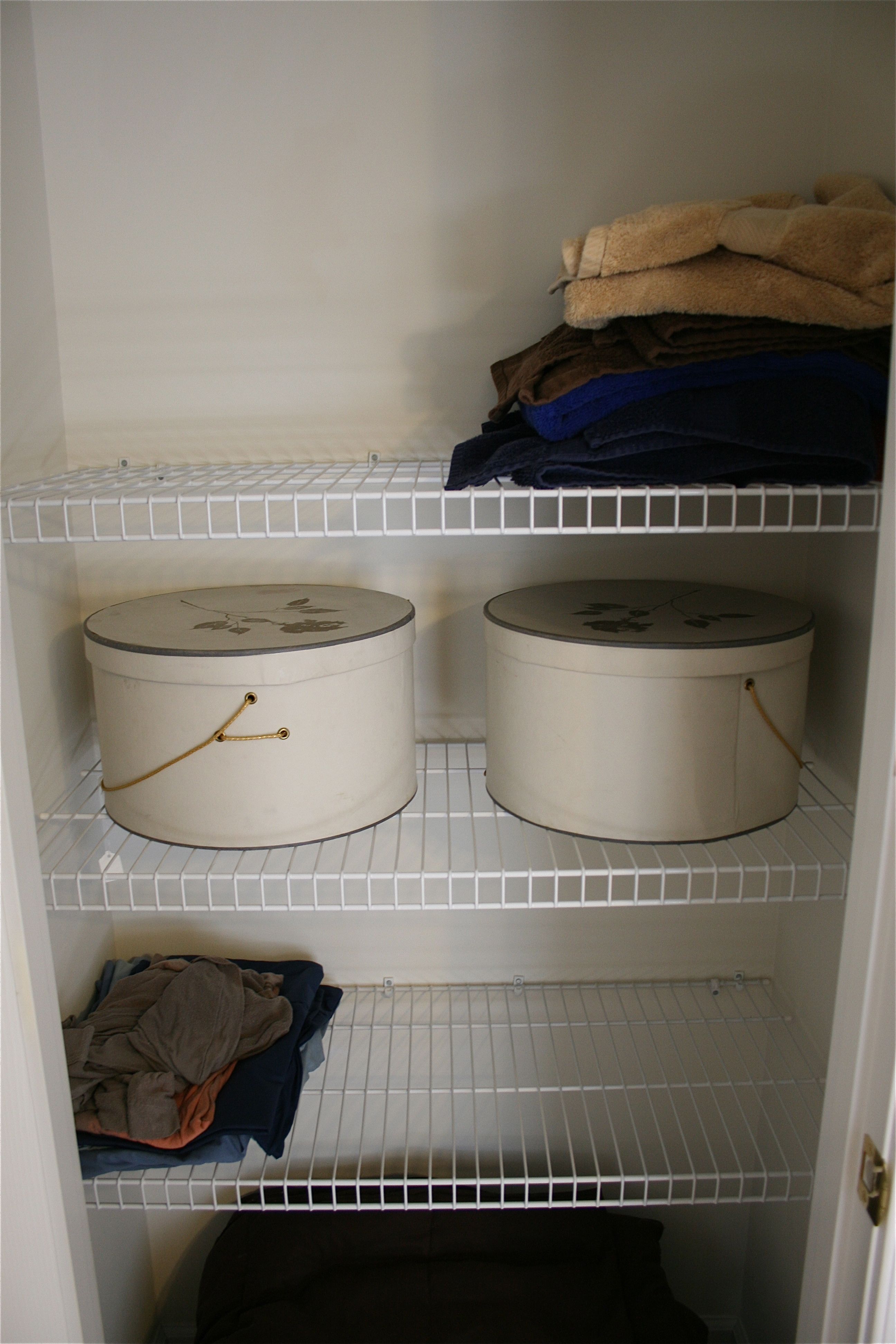 Well that picture was taken two weeks ago, pre-{Part Two}-move. So this is what it looks like today: 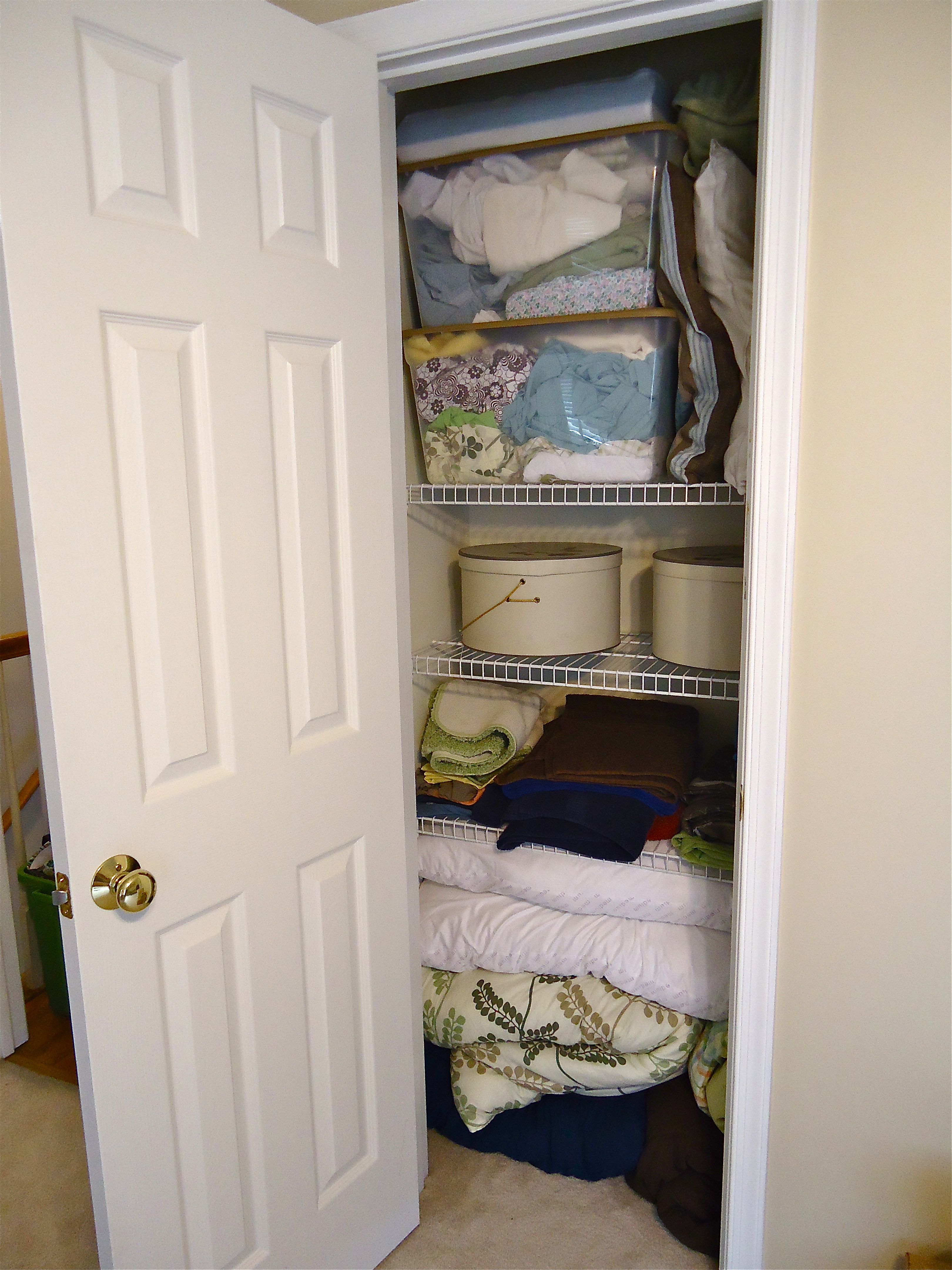 It’s REALLY bugging me how stuffed and disorganized it looks…But I have dreams of it looking more like this one VERY soon: 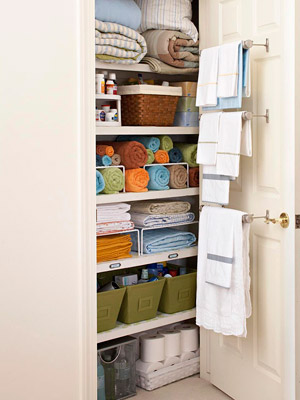 Luckily, my dream closet is very much like the one we have, so I think it’s TOTALLY attainable!

But there’s also another scenario in the works…My desk is going to eventually park itself right next to the closet – Here’s all my office stuff packed up and waiting on the floor where the desk will go: 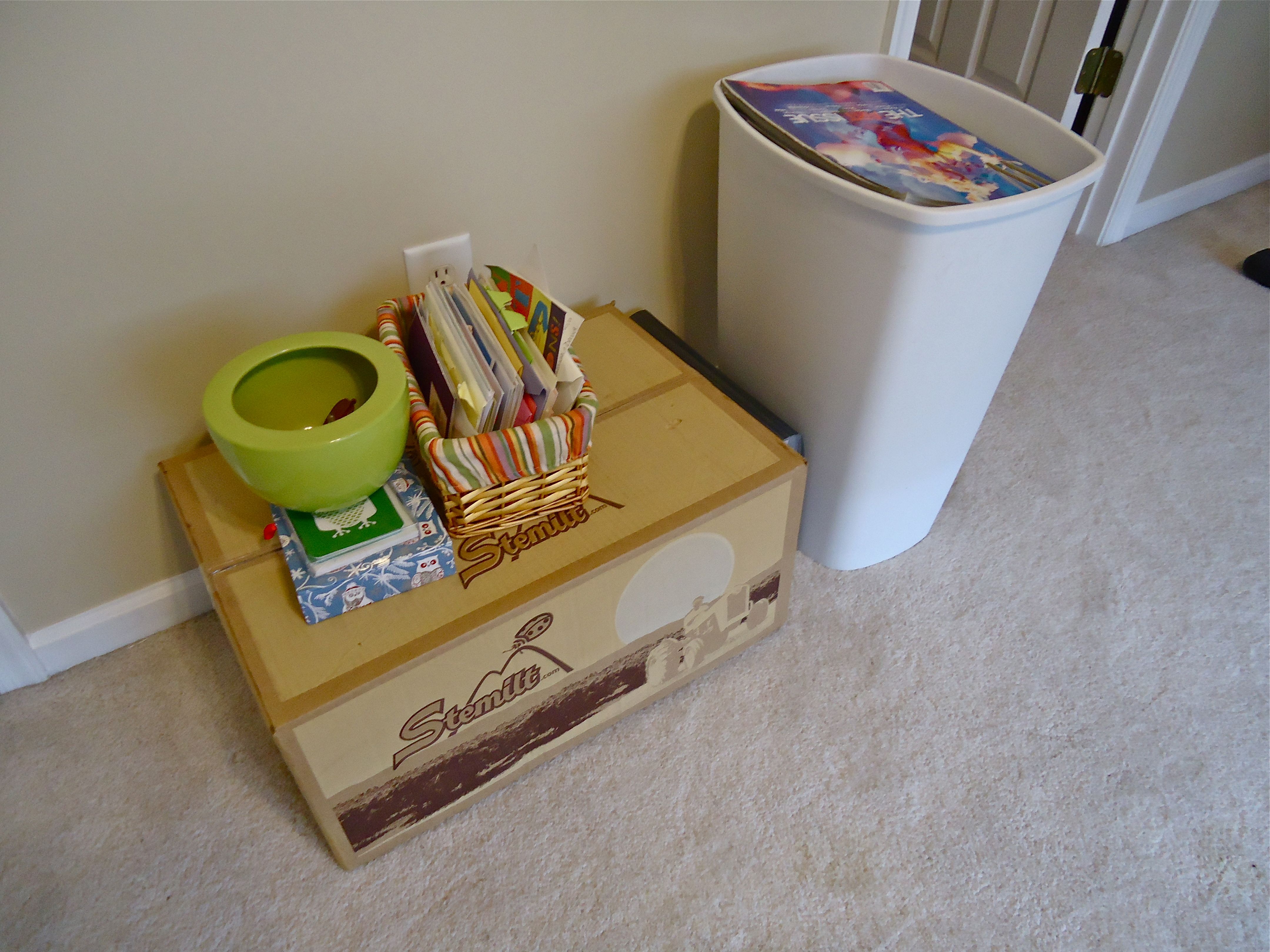 So I’m contemplating moving all of the linens (which can actually easily be pared down now that we only have one bed) to our MASSIVE master bedroom closet and using the linen closet for office supplies. We’ll see…Like I said, I think there will be a lot of reorganization once everything’s in and all the activity settles down a bit (did I mention I can’t wait for that day???).

Another part of the studio that’s moving in in droves is my book collection. I am an avid reader – Whenever I’ve got down time, I turn to my latest novel. I’ve been known to get so engrossed in a section that I don’t even notice when John walks over and joins me on the couch after finishing up his own activities. I just can’t help it! He’s sweet enough to realize that I’m intoxicated by the book though and grabs his computer to peruse the internet until I “come-to” 🙂

With that said, it should come as no surprise that I have a fairly large collection of books. Here’s one book shelf’s worth: 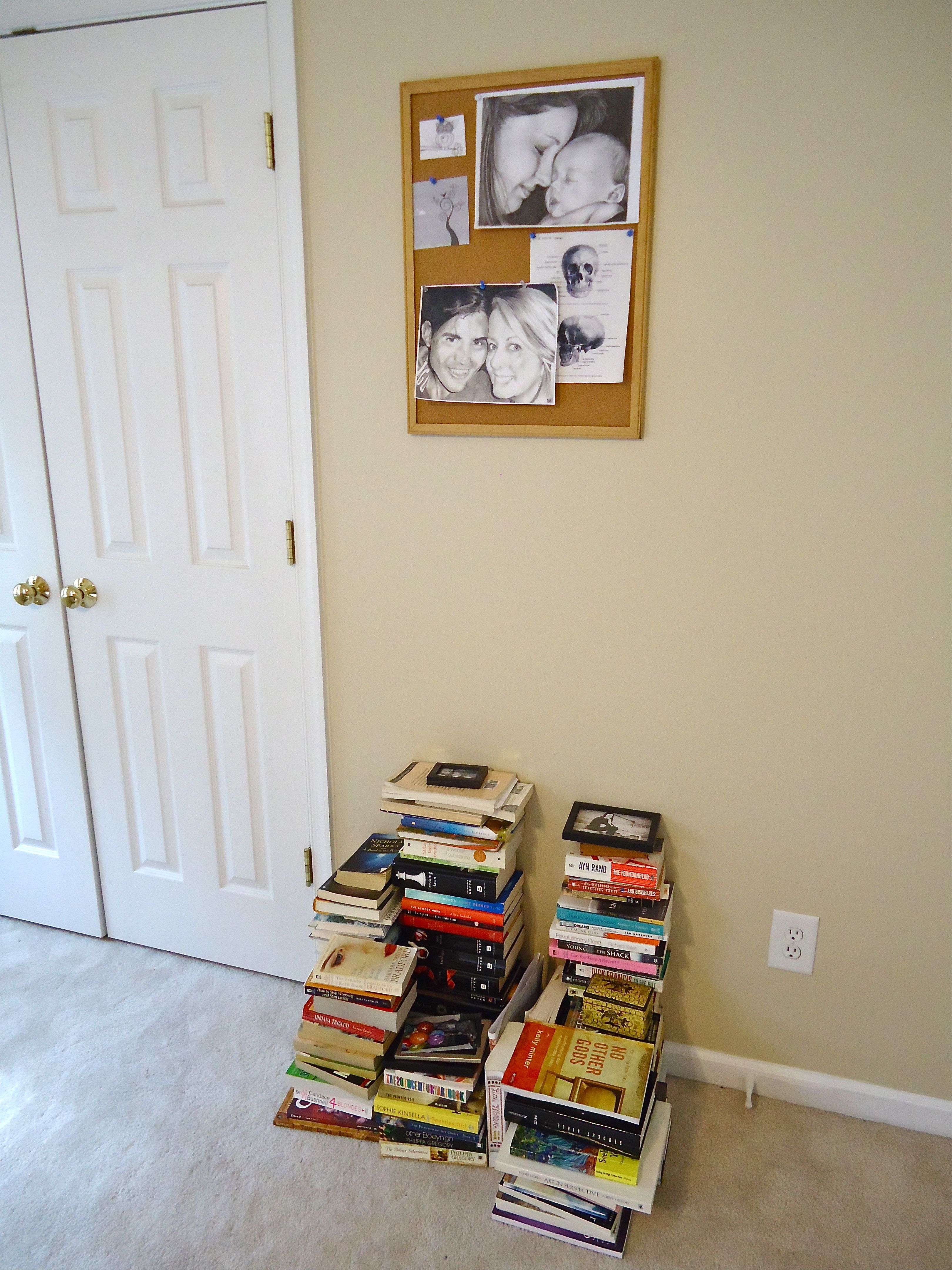 The book shelf itself is in the queue to get repainted (did you see it in the corner of the picture of boxes in the living room??), so for now they’ll have to live in piles. While I kind of like the piled book look, I’m not going to be able to look at it that way forever. Hopefully we can get the shelf repainted and in place over the weekend!

As we all know, you can’t move without SOME casualties…Here’s my first (and hopefully last) loss: 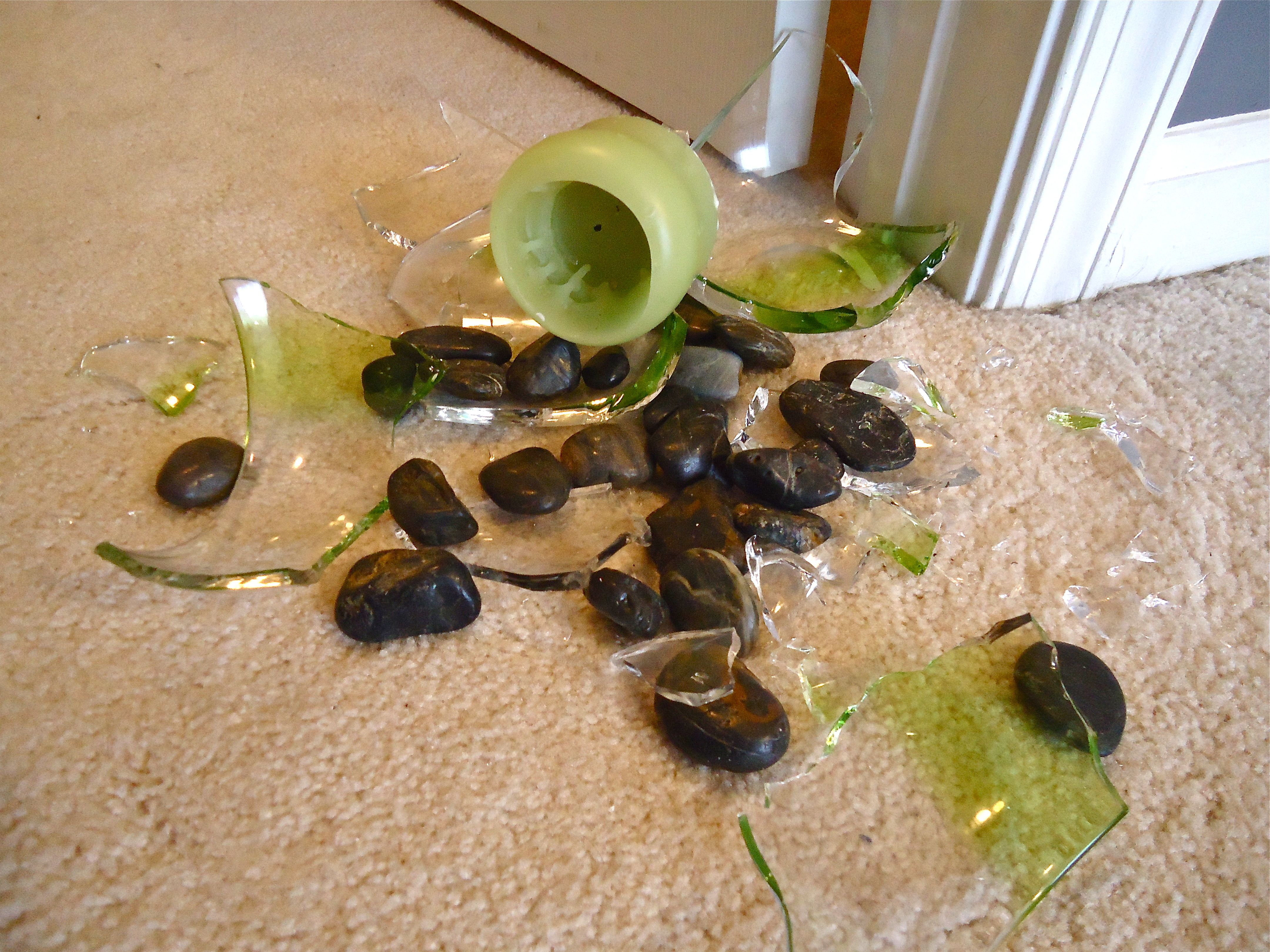 It’s a glass candle holder that I picked up from Ross for a few bucks – Not a HUGE loss, but definitely something I wish could have been avoided. I’m just glad it didn’t fall on my feet!!! Ouch…

Other then that, the moving process has been steady and without hitch. Not too much longer now!!!

Hope you have a great weekend 🙂