Last week, I made a bold statement about having a certain something special up my sleeve. John and I planned a Saturday day trip a ways out-of-town to a REALLY neat antique store we’ve been to once (even posted about it here). I had a verrryyyyy specific purpose in mind for this trip and was set on making my plan work.

Guess what though?? Didn’t go quite the way I wanted it to.

Here was my vision: One day a while back it occurred to me how cool it would be to use a ladder as a magazine rack! But not just a ladder leaned up against a wall – Oh no…I was going to suspend it on the wall using four curtain rod U/L-shaped brackets (yeah, I just made that term up…But you know what I’m talking about!) 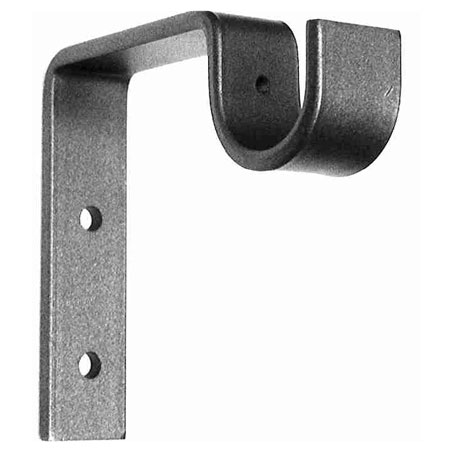 The last time we went to this particular antique shop, there were at least half a dozen old wooden ladders leaning against the front porch. So John and I made the 45-minute trek out there with a hack saw in  the back of the truck (I didn’t need but about four feet of the ladder so I figured we’d just cut it down).

This is us trolling along down the highway 🙂 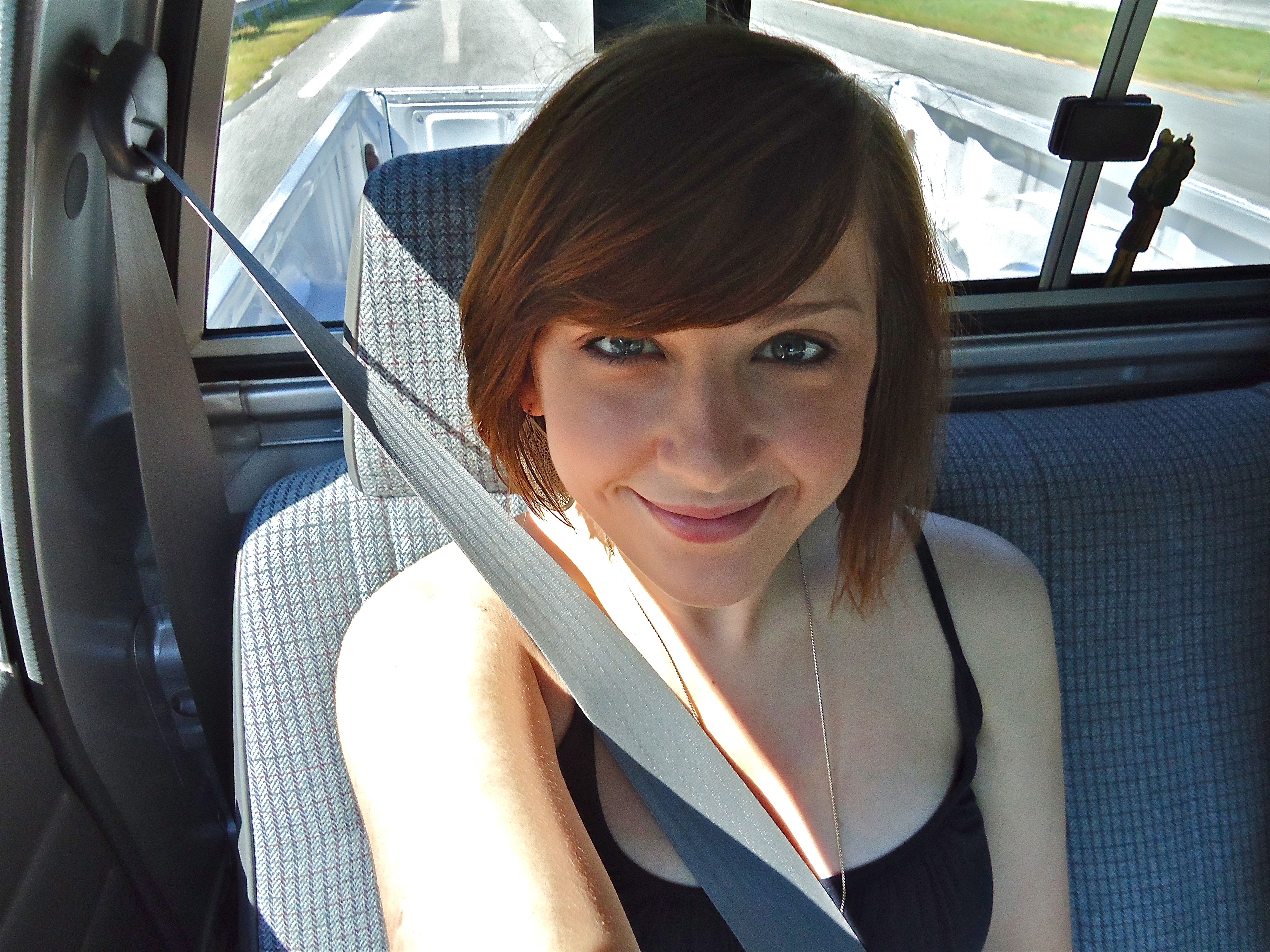 John was too busy…ya know…manning the vehicle to actually give me a good camera smile. But I guess I can’t be too nit picky 😉 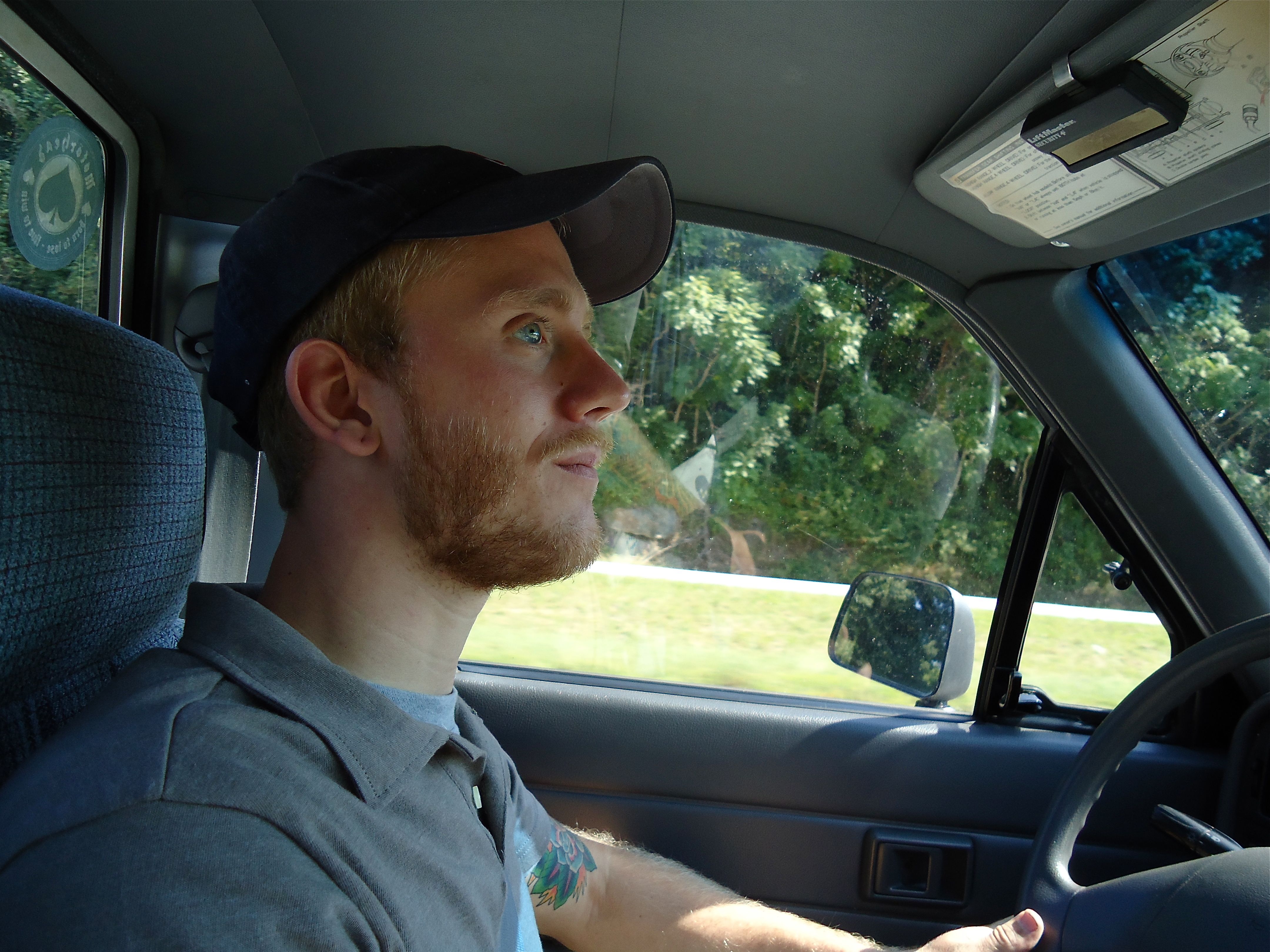 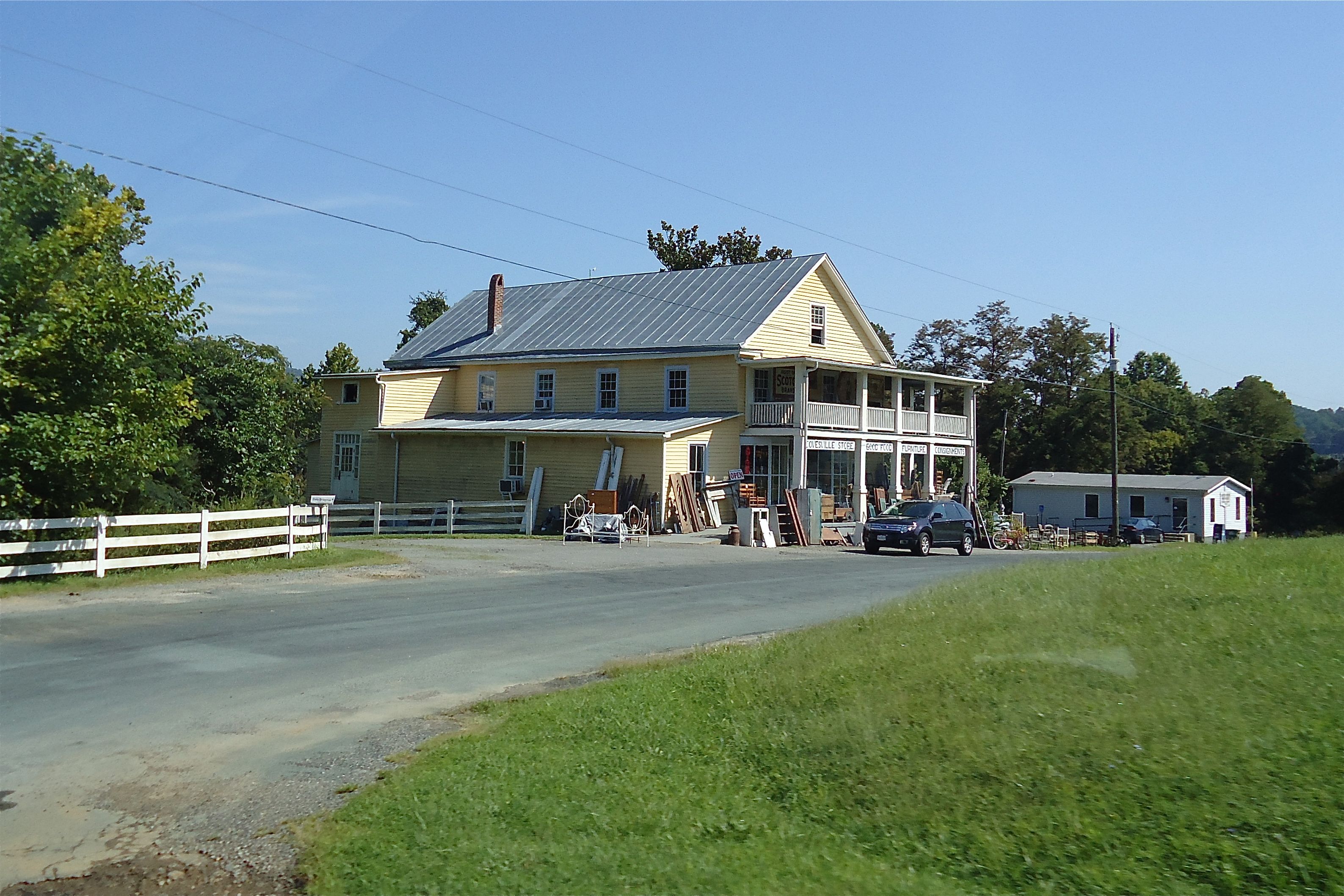 I probably should have gotten a little worried at this point, but I didn’t. I was too excited to get in there and look at the millions of little trinkets and one-of-a-kind pieces of furniture. I knew I’d find my ladder leaning up SOMEWHERE.

Before I get to THAT let down/disappointment/defeat, allow me to show you the gem this store really is. Here’s what you see when you walk through the front doors (sorry the photos pretty much suck throughout this entire post – It was pretty dark in there, and I only brought my little point-and-shoot camera instead of our bulky professional one): 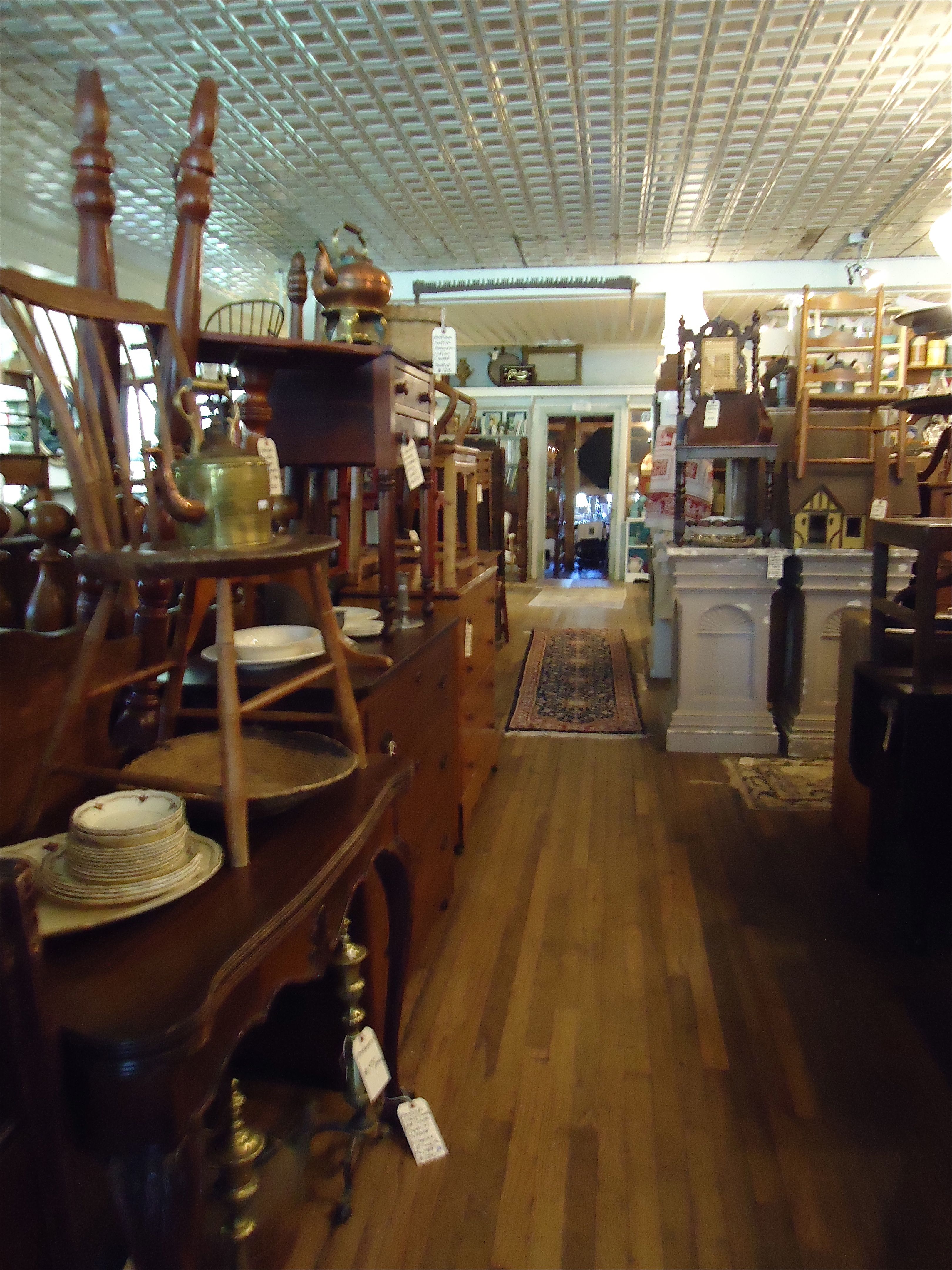 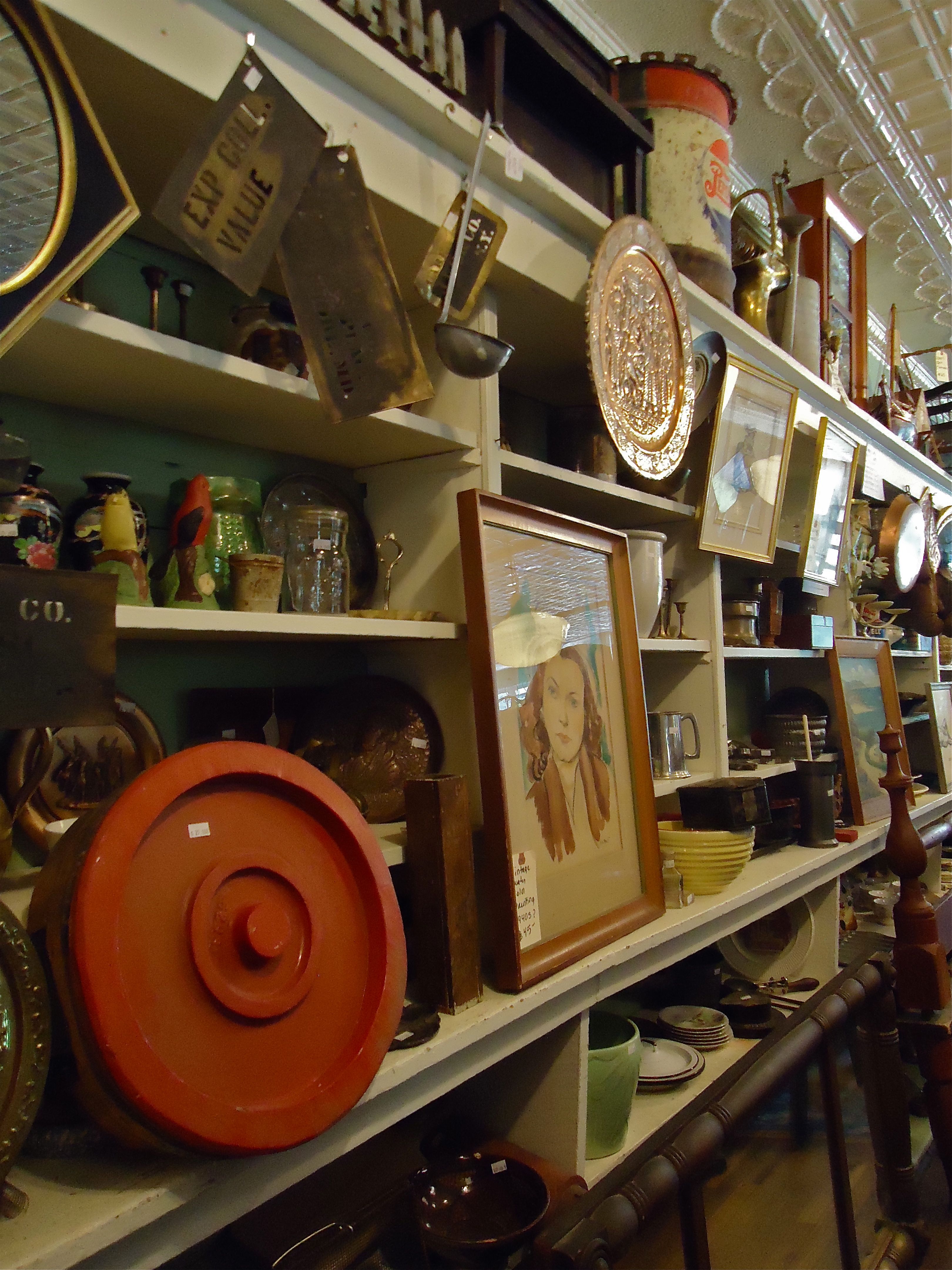 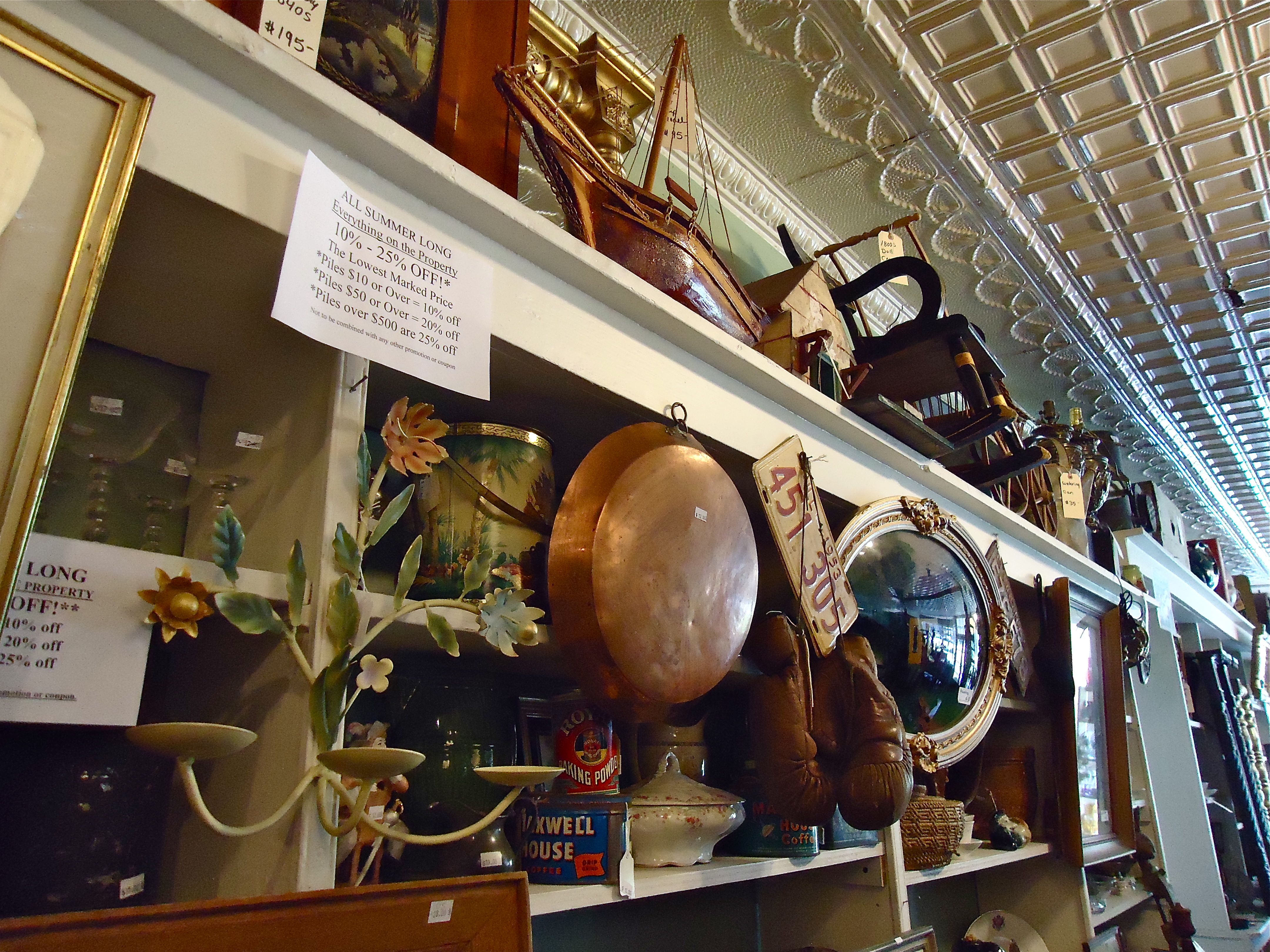 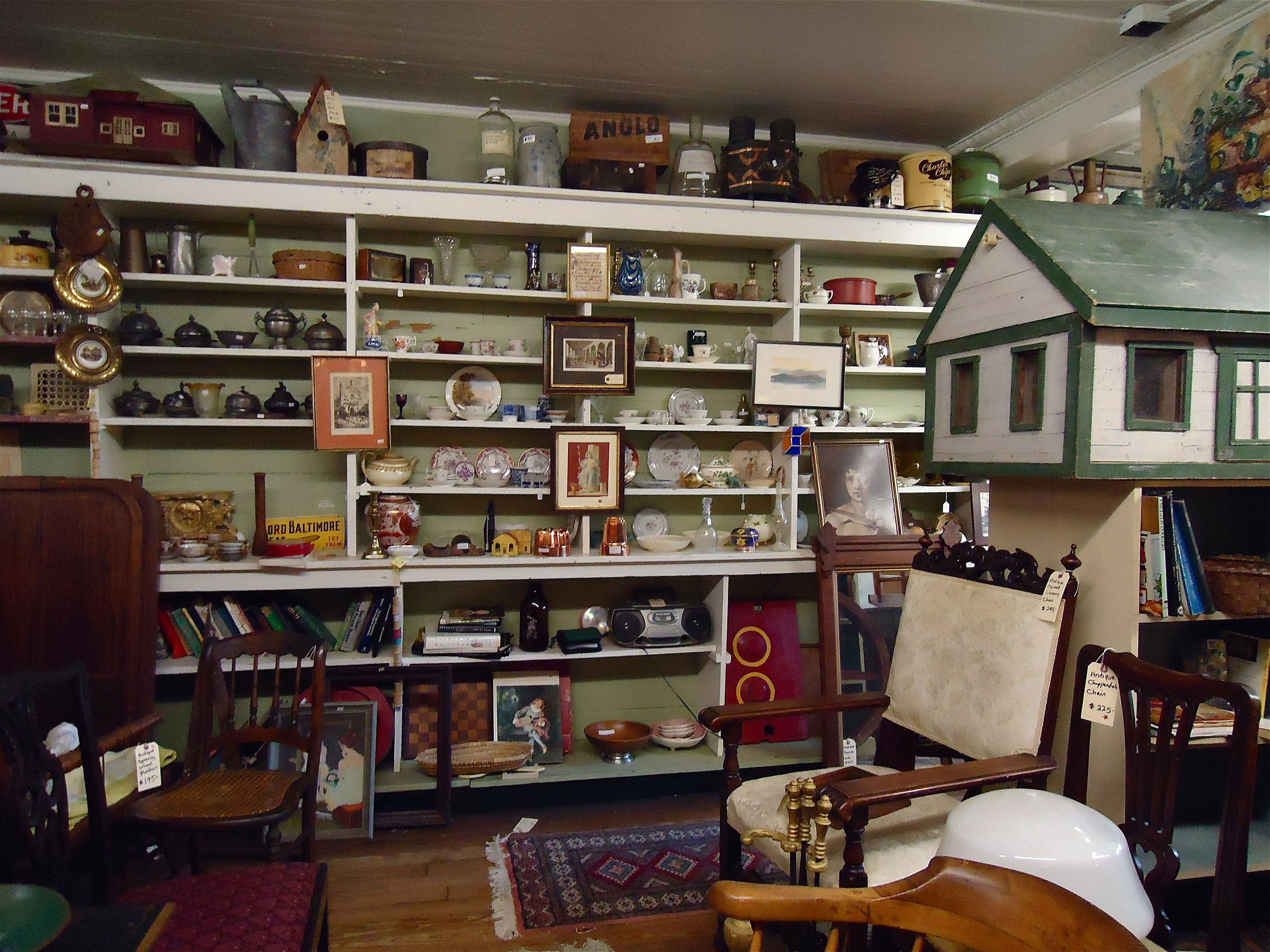 Hey…Those horse bookends look familiar…Good thing I got mine for 3 bucks for the pair instead of $12 EACH! 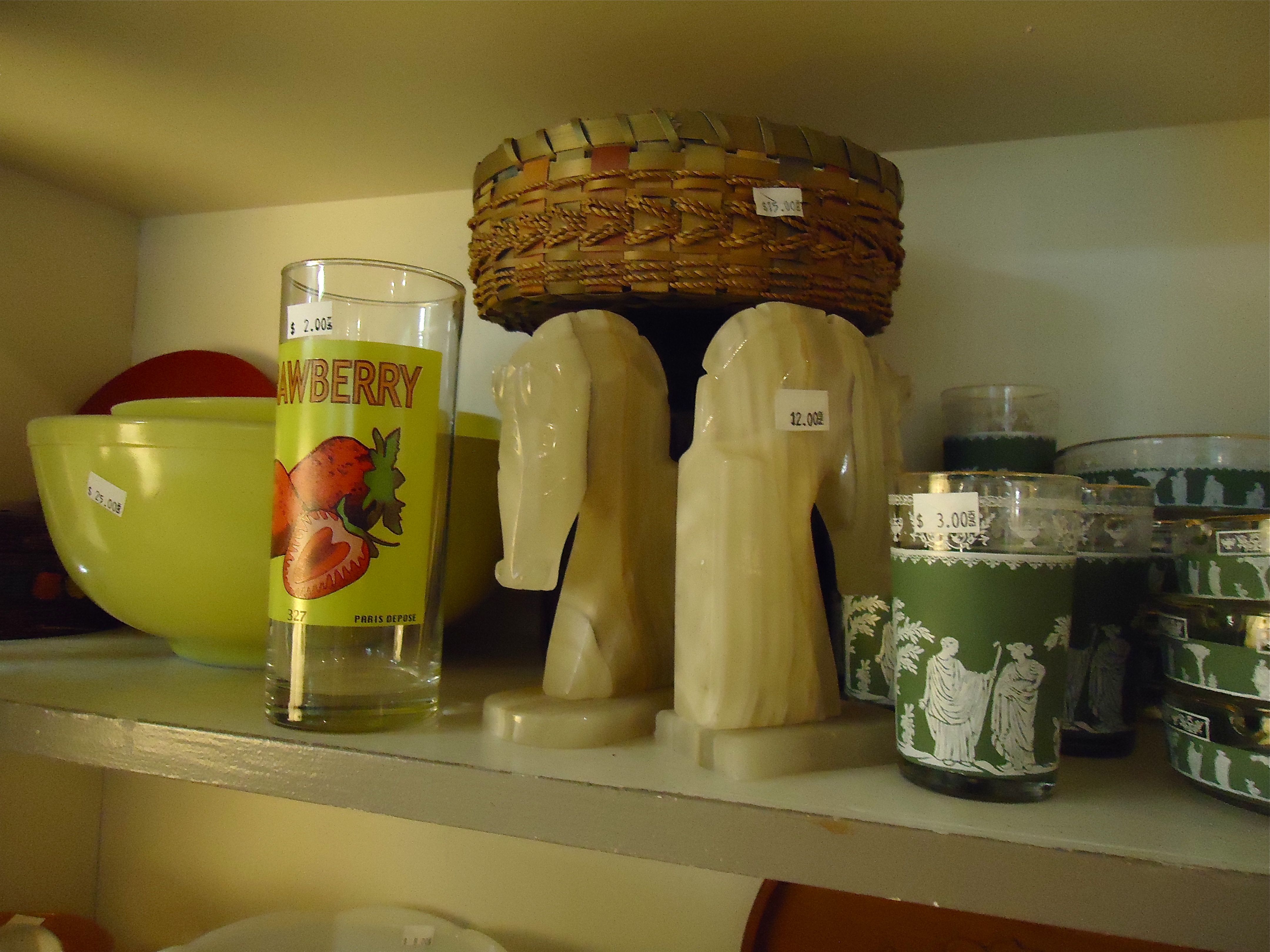 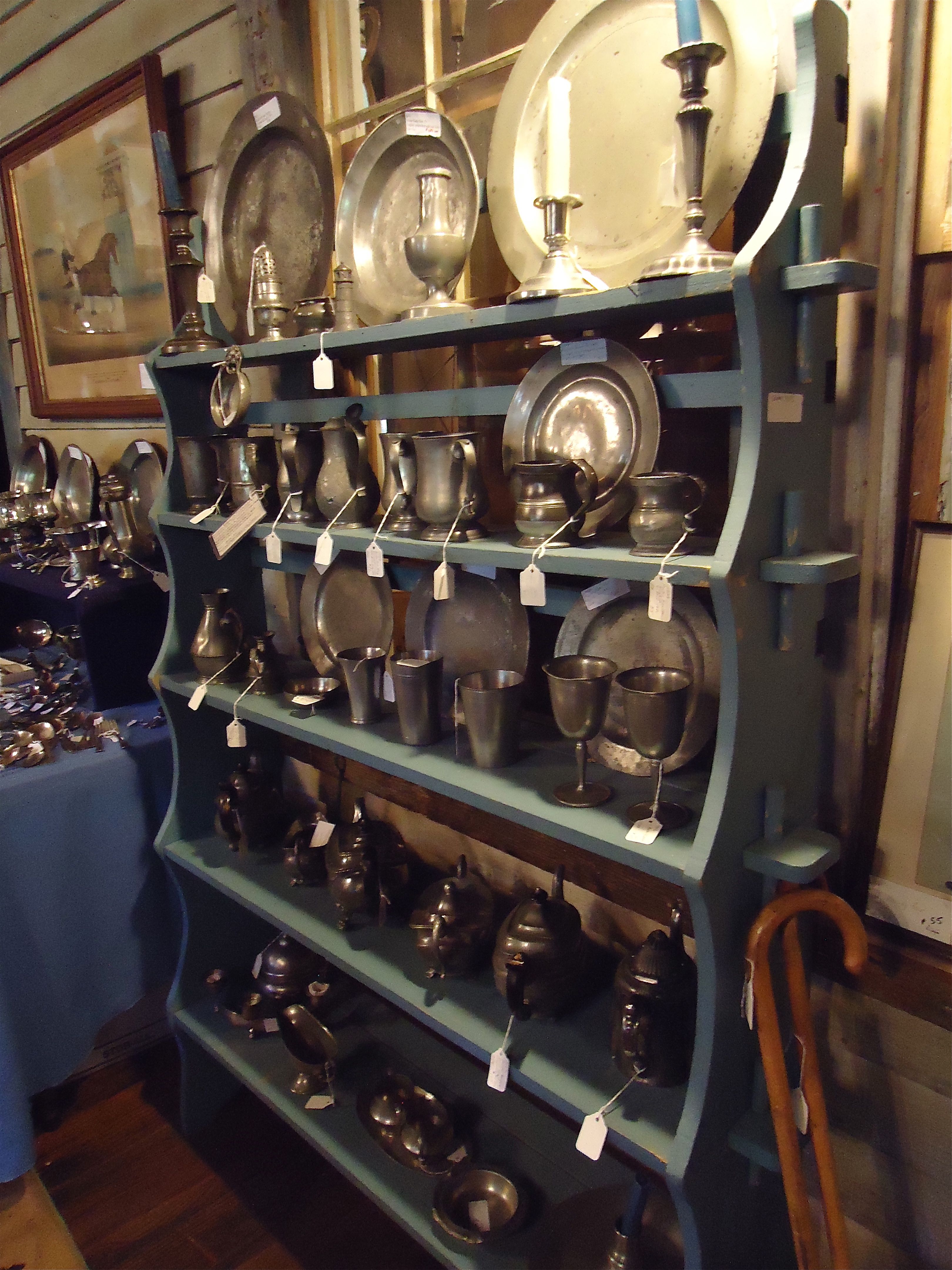 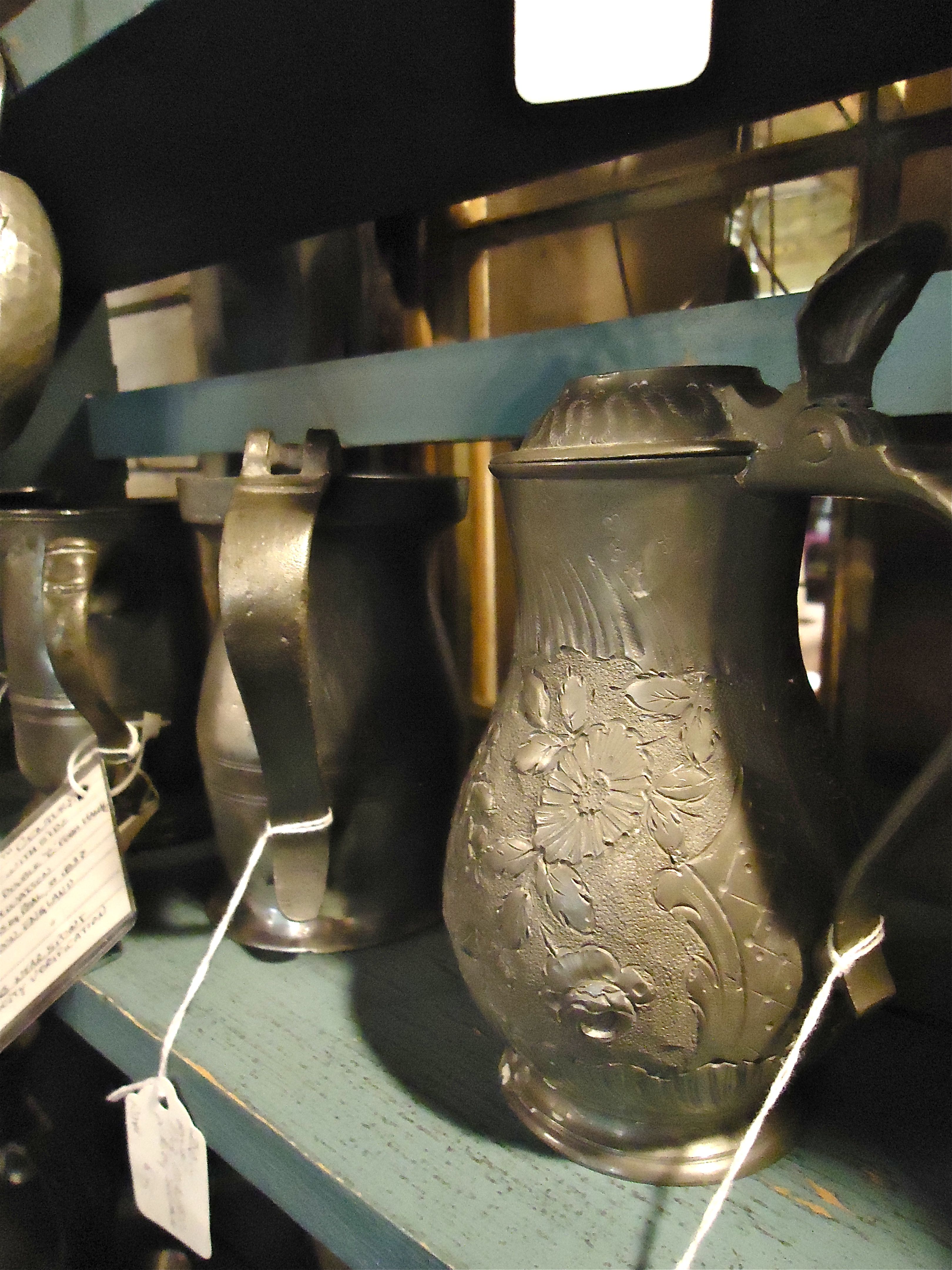 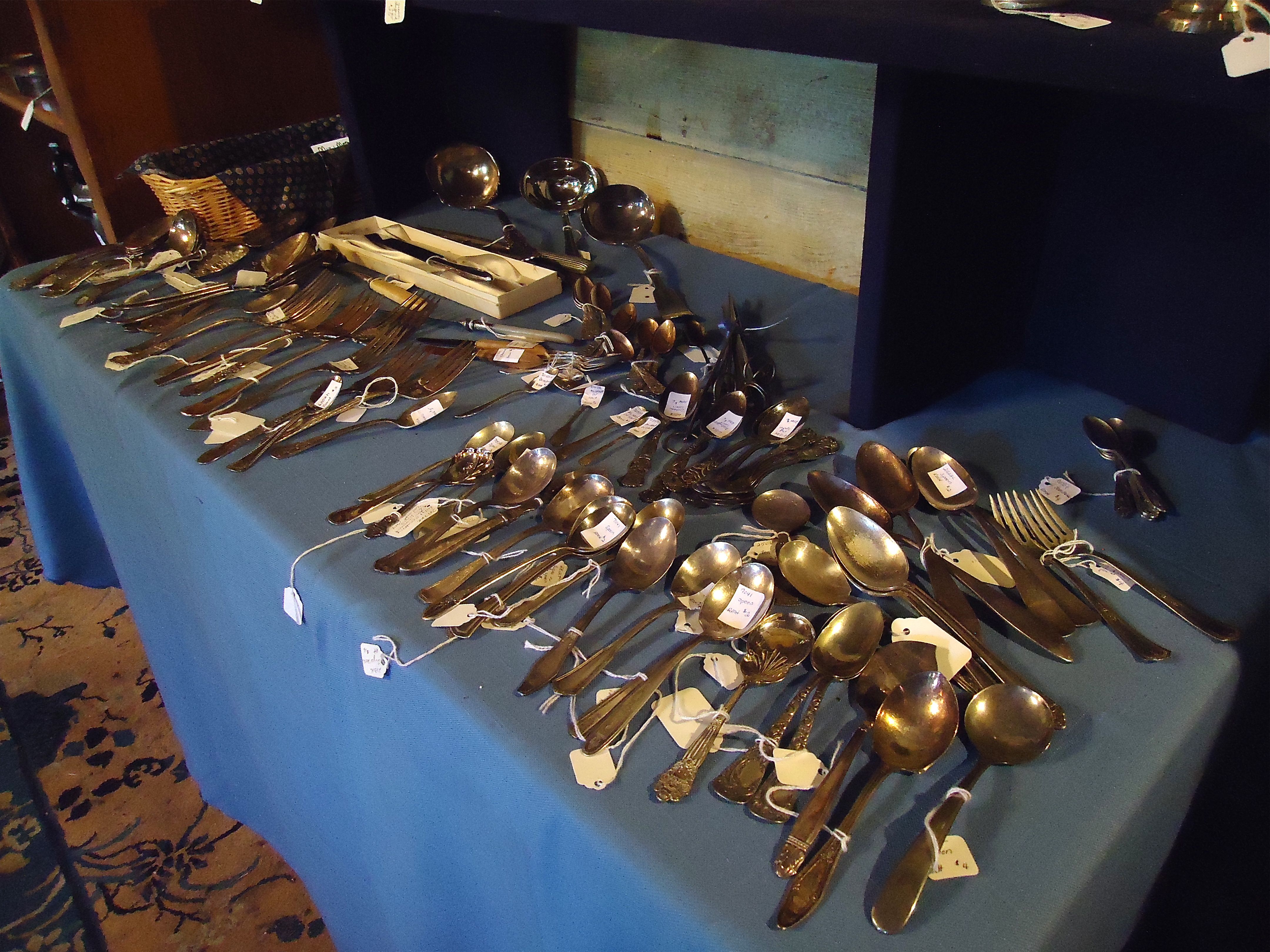 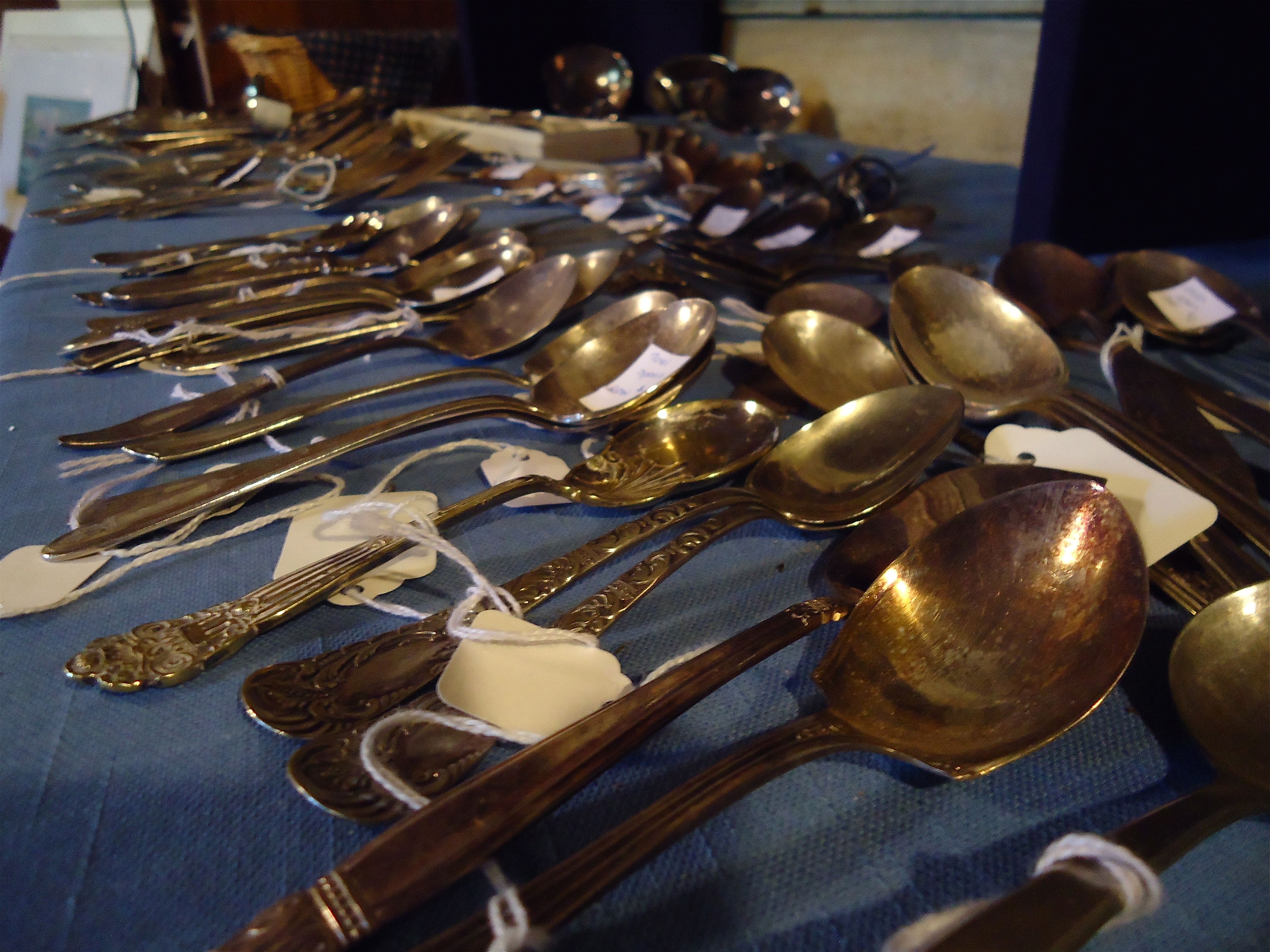 I love the way this bookshelf looks with the wallpaper down the back panel! So pretty…And I even thought the framed fabric doily on one of the shelves was pretty endearing, especially if you happen to have a collection of them – Maybe from a grandmother? A bunch of them framed on the wall could be really fun and unique! 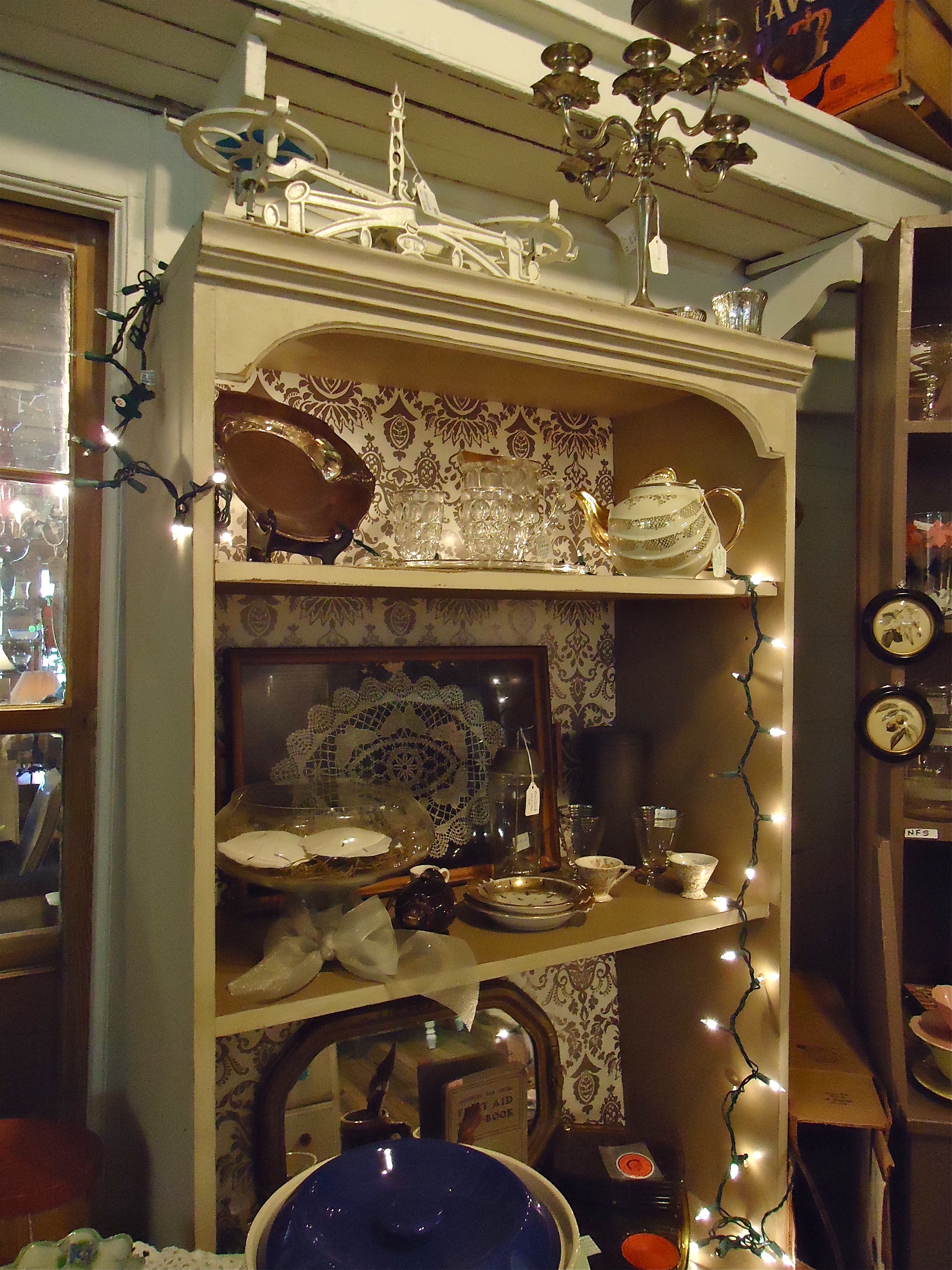 Then we decided to make the trek upstairs to see what we could see. On the way, I saw these two Asian prints and fell in love…Too bad they were $40 each. That was pretty much the theme of this trip. I saw SOOOO many things I wanted to take home, but being that it was an “antique” store and not my usual “thrift” store, things were way out of our price range. So sad… 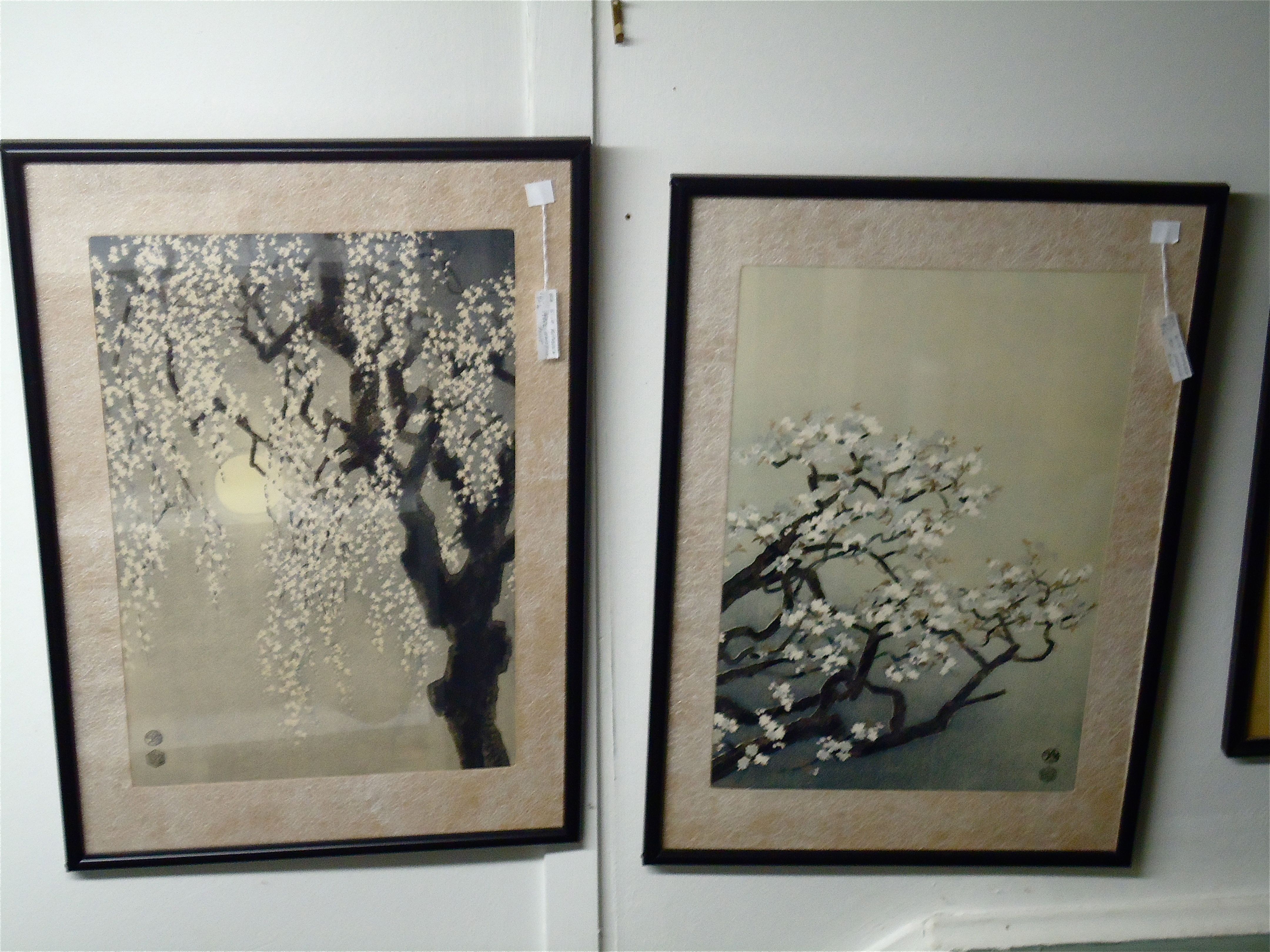 Up on the second floor, we saw a few interesting things. John found a gigantic beer glass and some comics, and I found a box of Breyer horses. They were $18 each though…Apparently my really old banged up toys are still worth a little something! 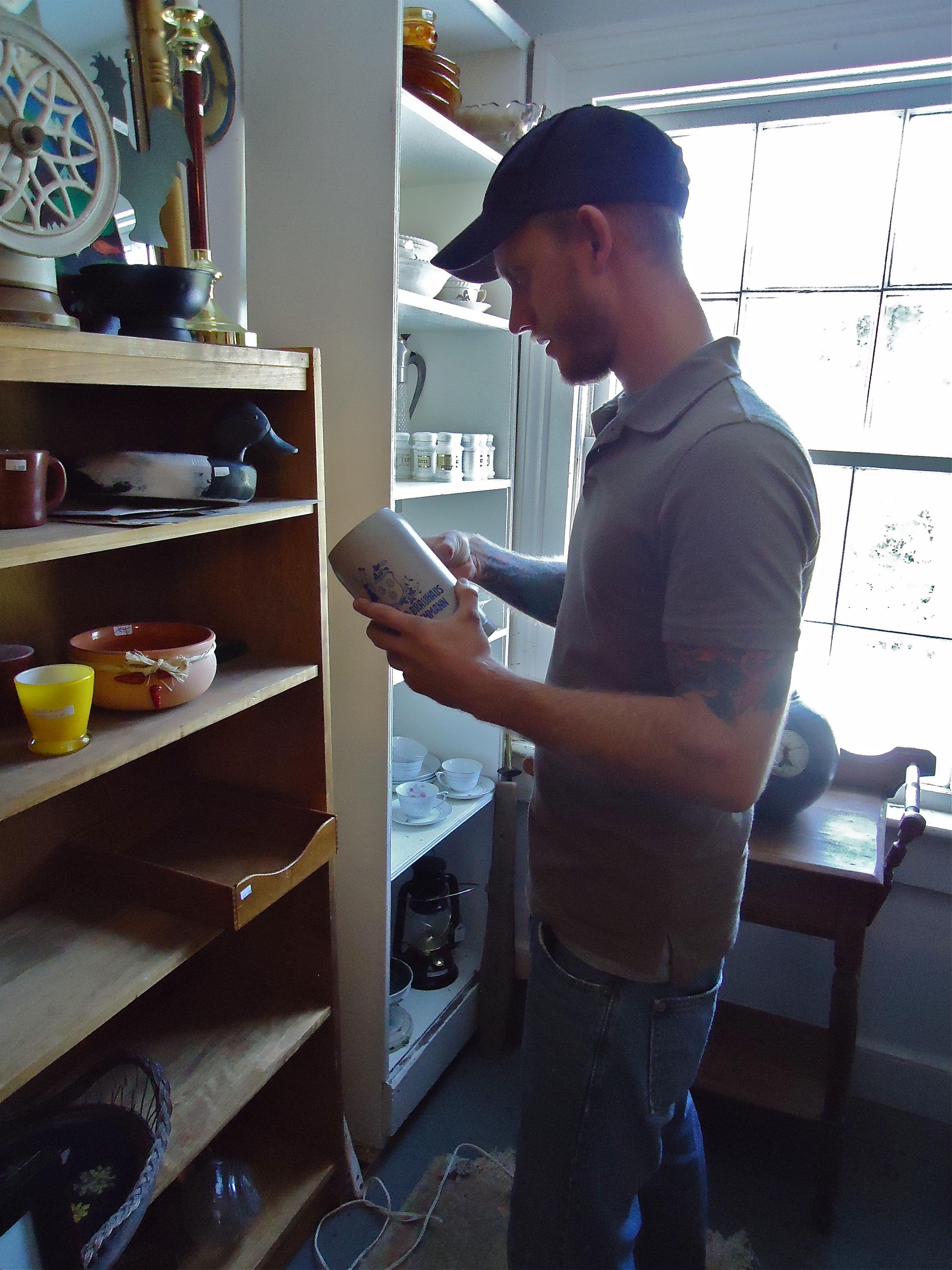 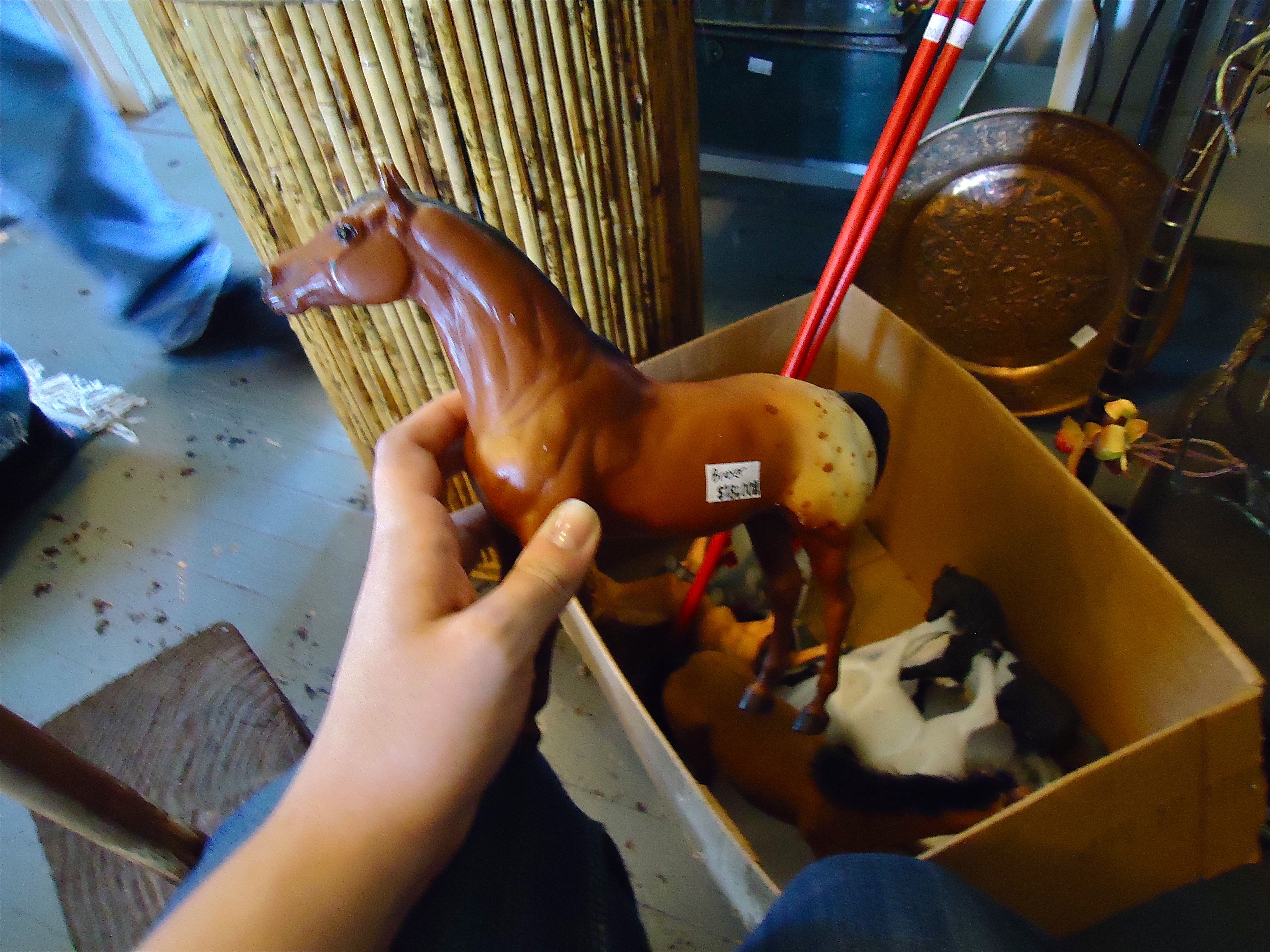 Checking out the comics… 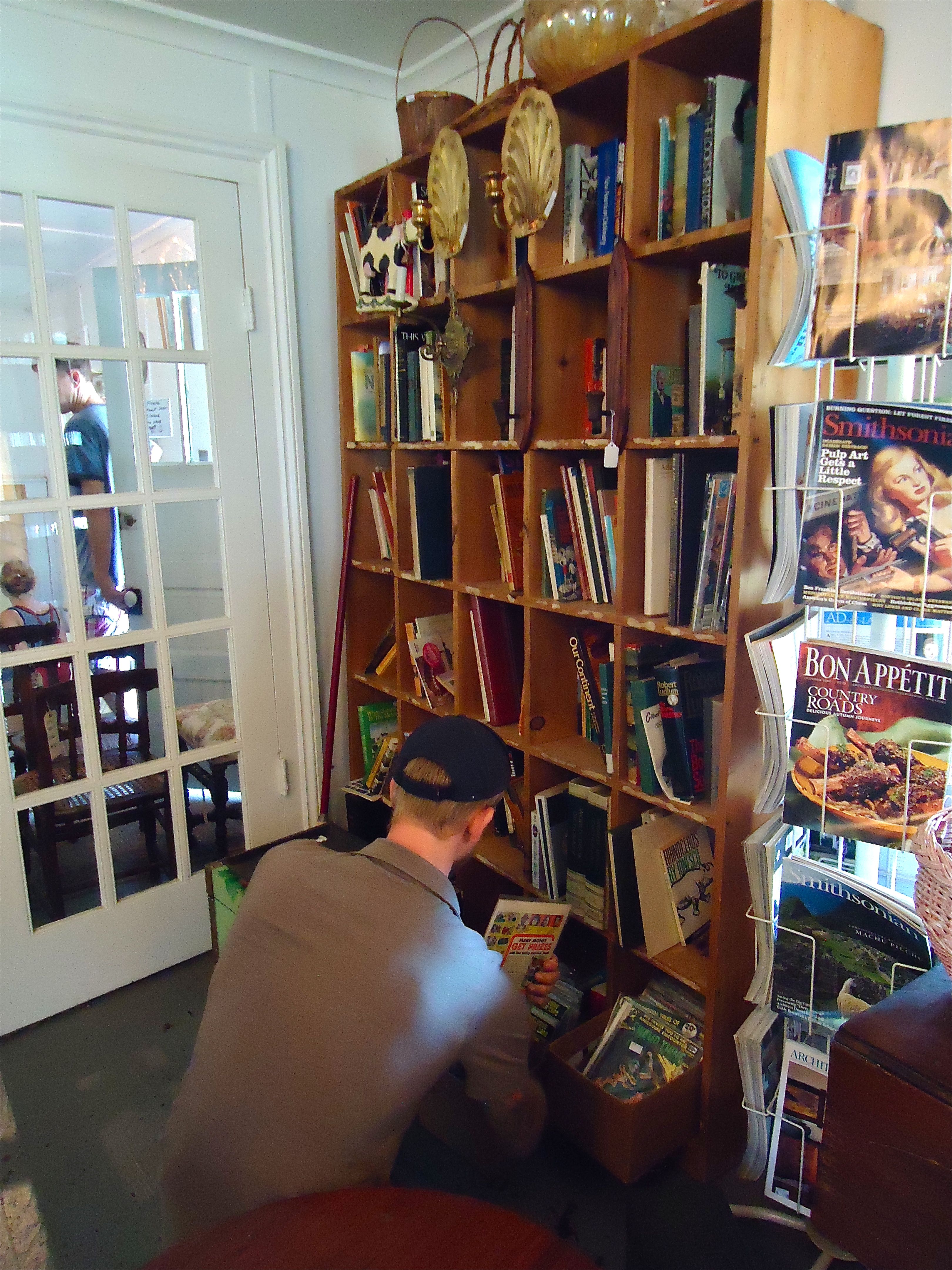 While he was doing that, I made a circle around the outdoor porch area on the second floor. Wasn’t TOO much to see, except maybe this awesome vintage sign… 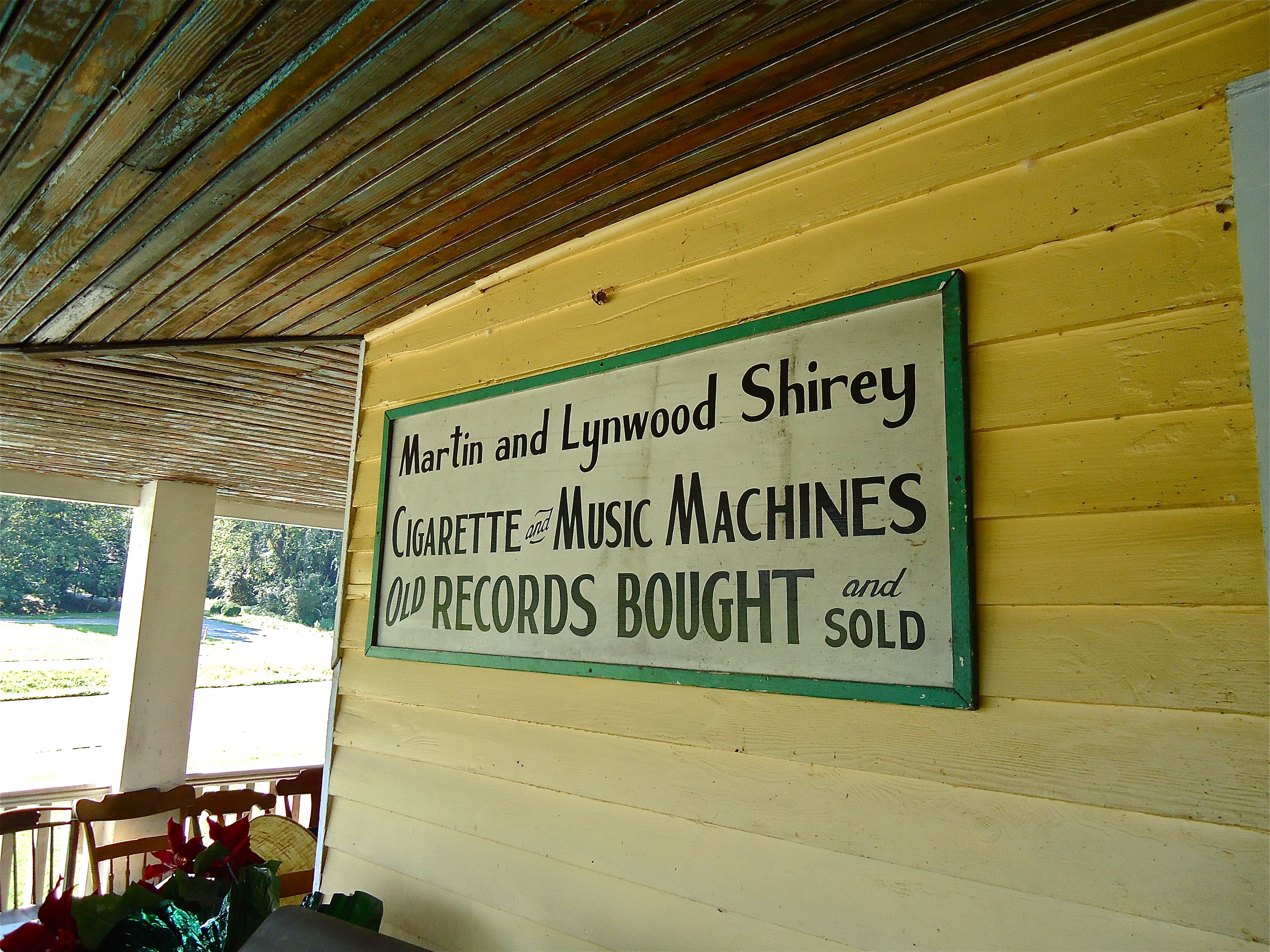 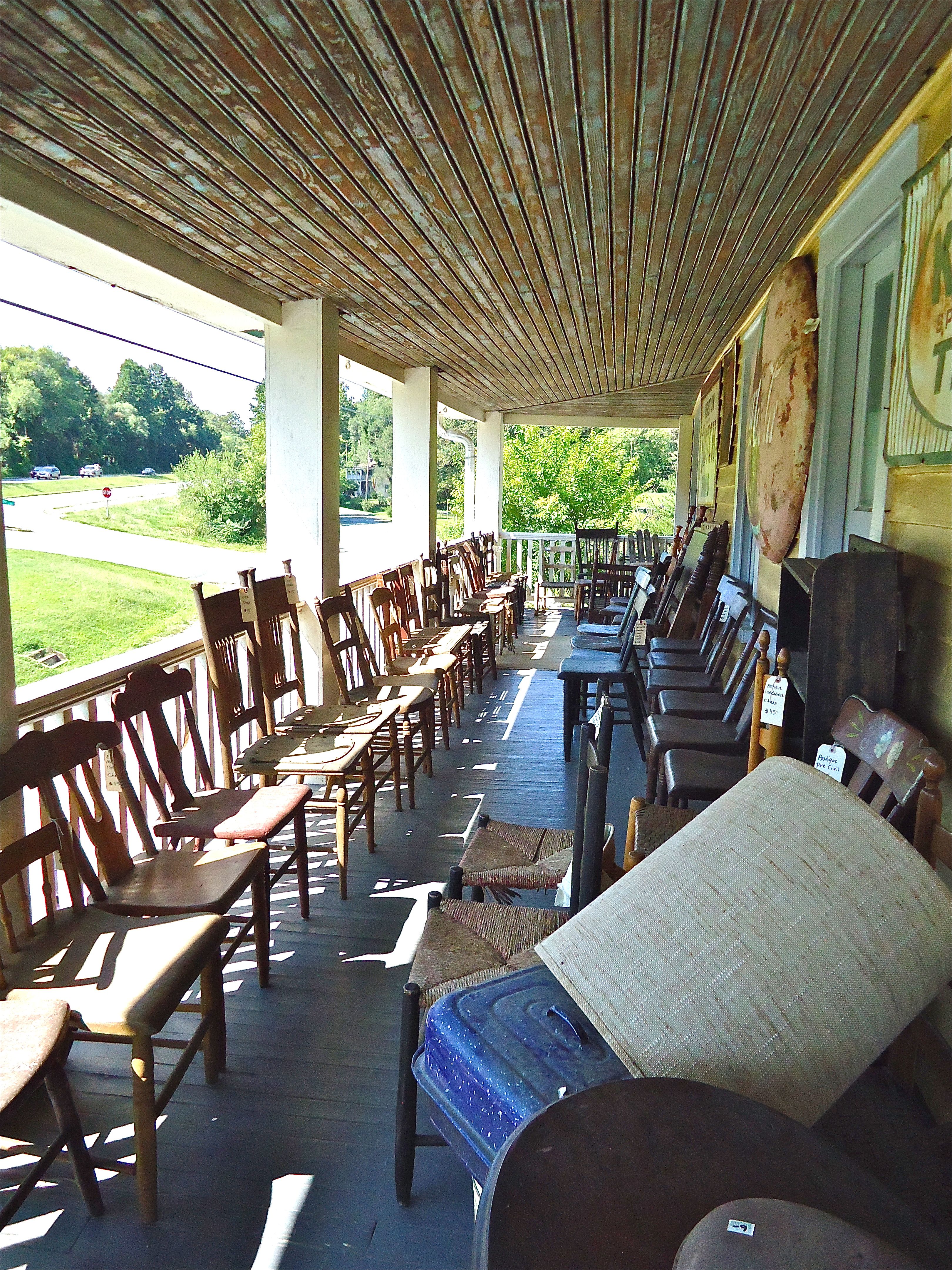 Or some shutters? (this was back down on the main level porch, where I was continuing my hunt for the ladders that I knew had to be somewhere) 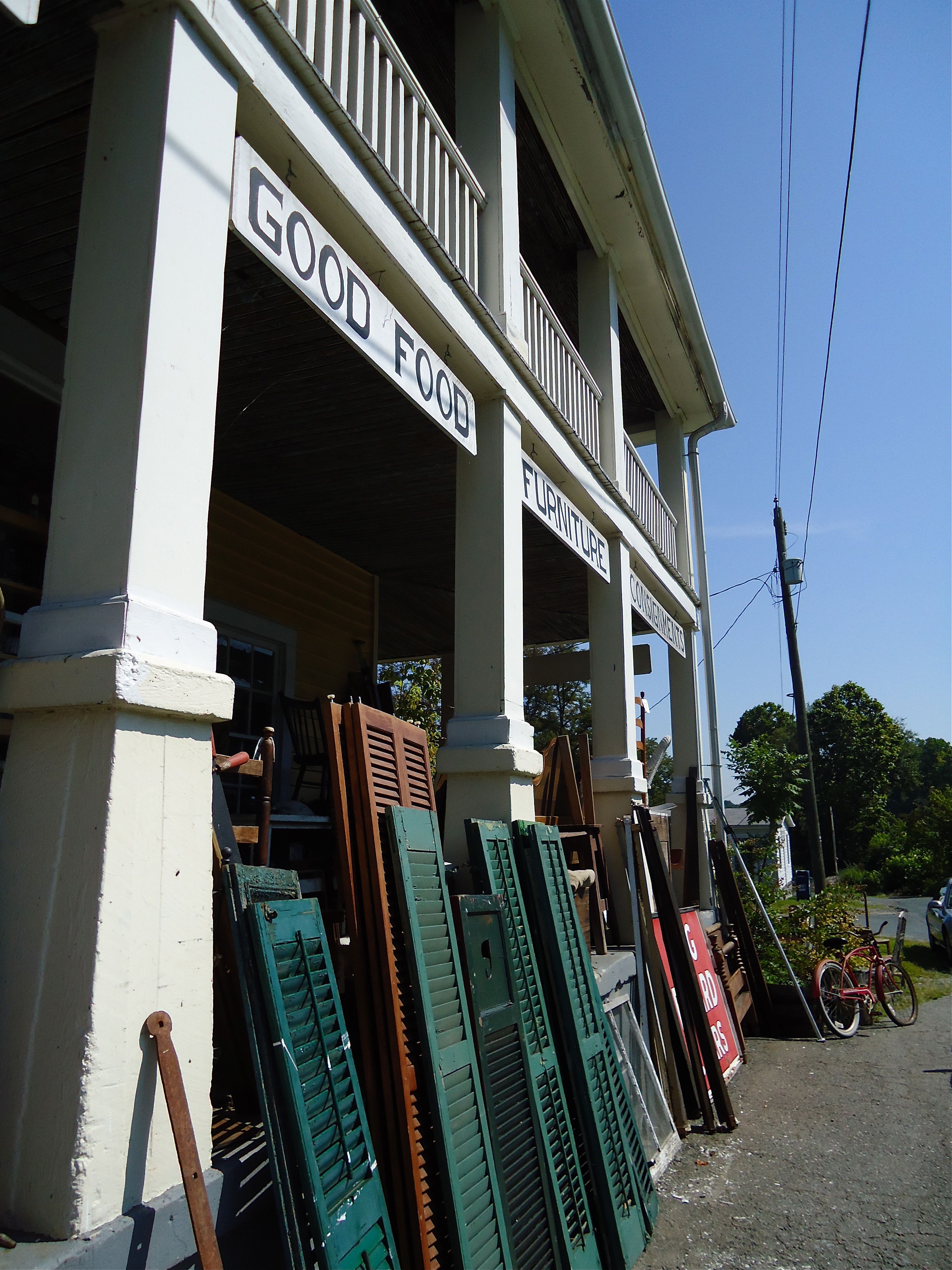 Alas, there were no ladders to be found…The only thing we ACTUALLY walked out of there with was a handful of old comic books. When we went to the register, I asked the guy if they had any ladders. He knew exactly what I was talking about right away and told me to go check around the entire perimeter of the store because sometimes they have them kind of laying around. He even told us that he often saws them down to size for people – It was meant to be!!!

After paying and heading back outside for a second go through, I got a little excited when I saw this from afar… 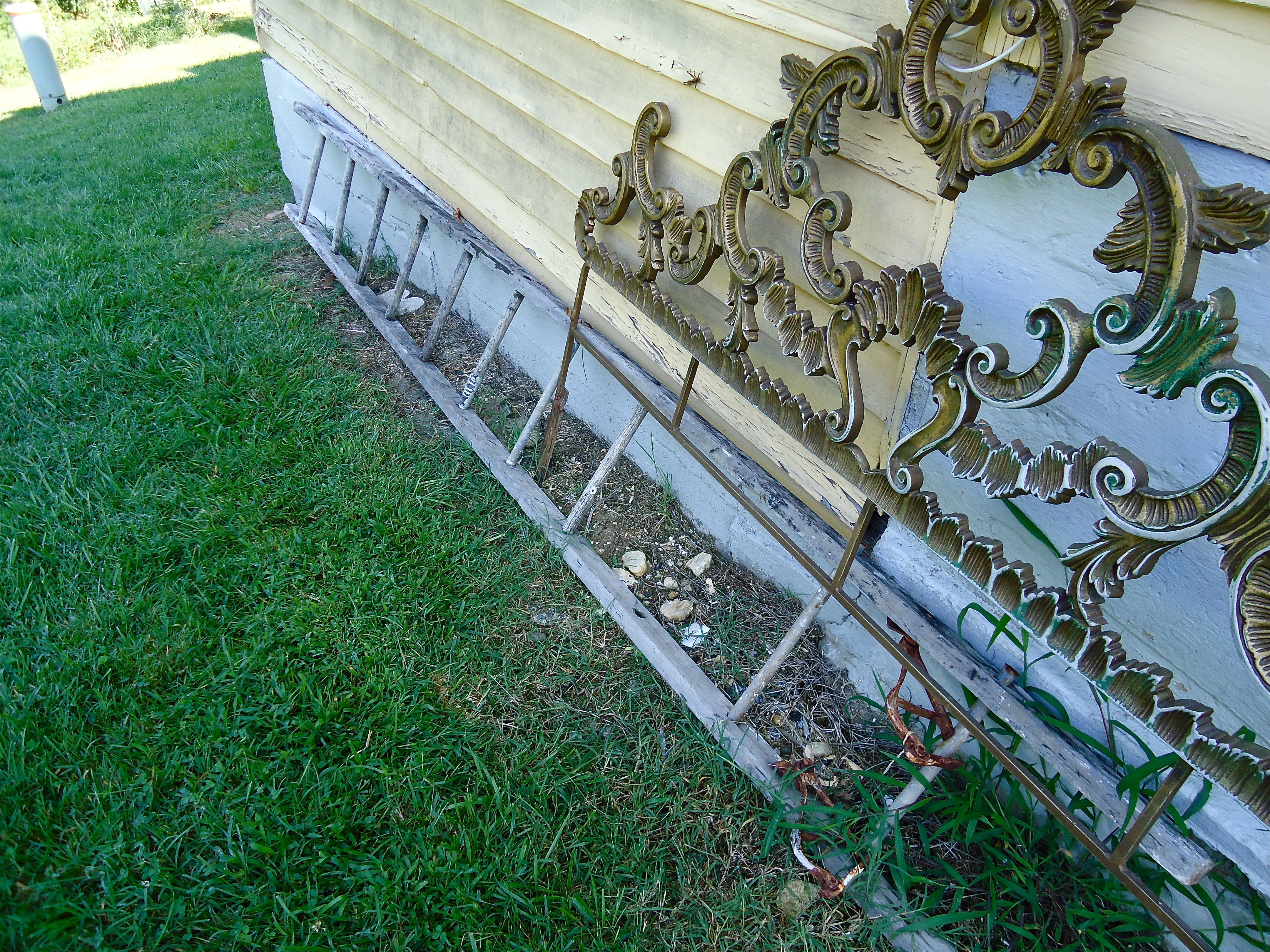 But it was a little too rotten/soggy for my purposes once we got up close. 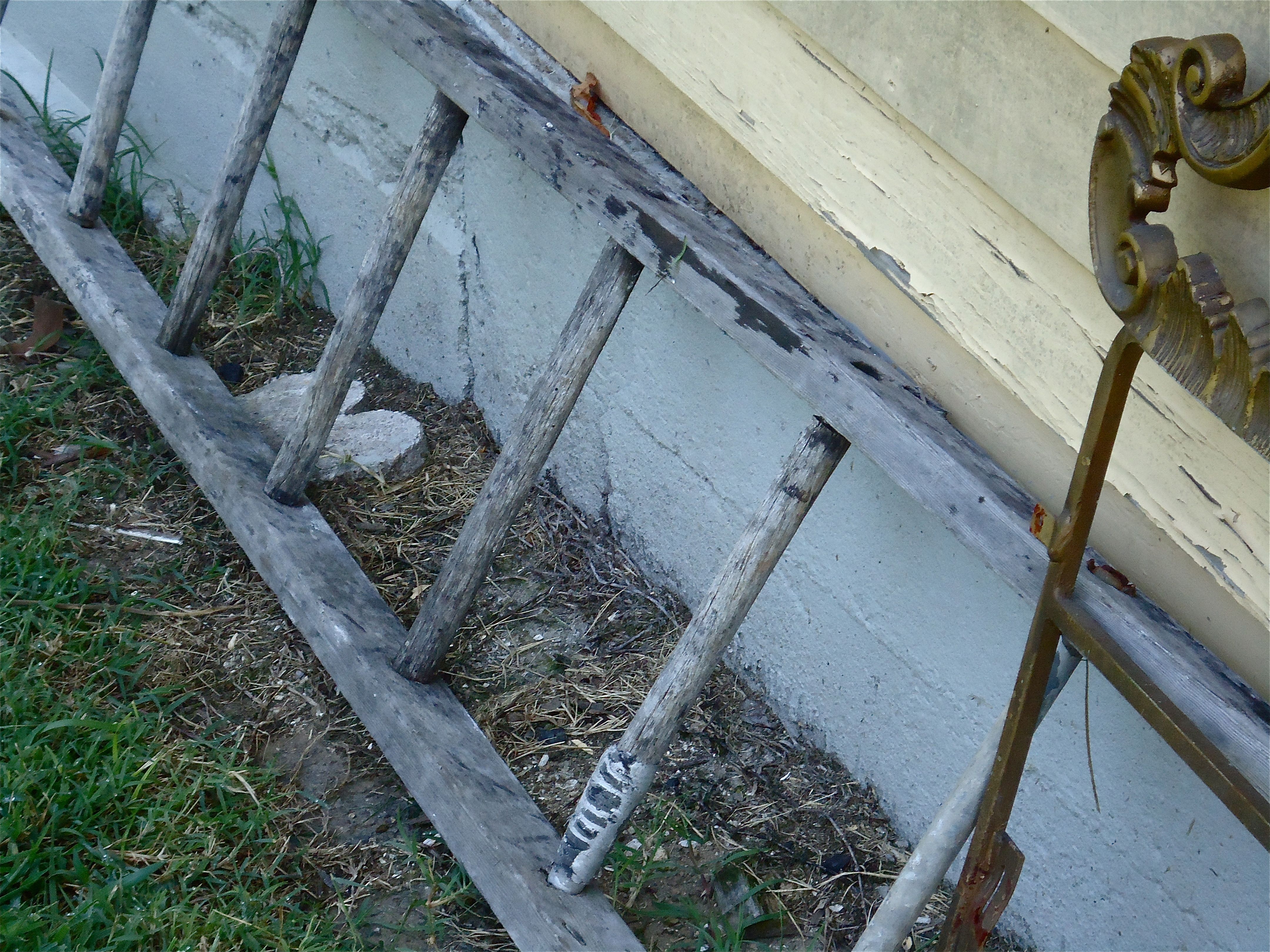 There were only two things I even thought about buying – This nifty little retro clock (which apparently doesn’t actually work) for $3: 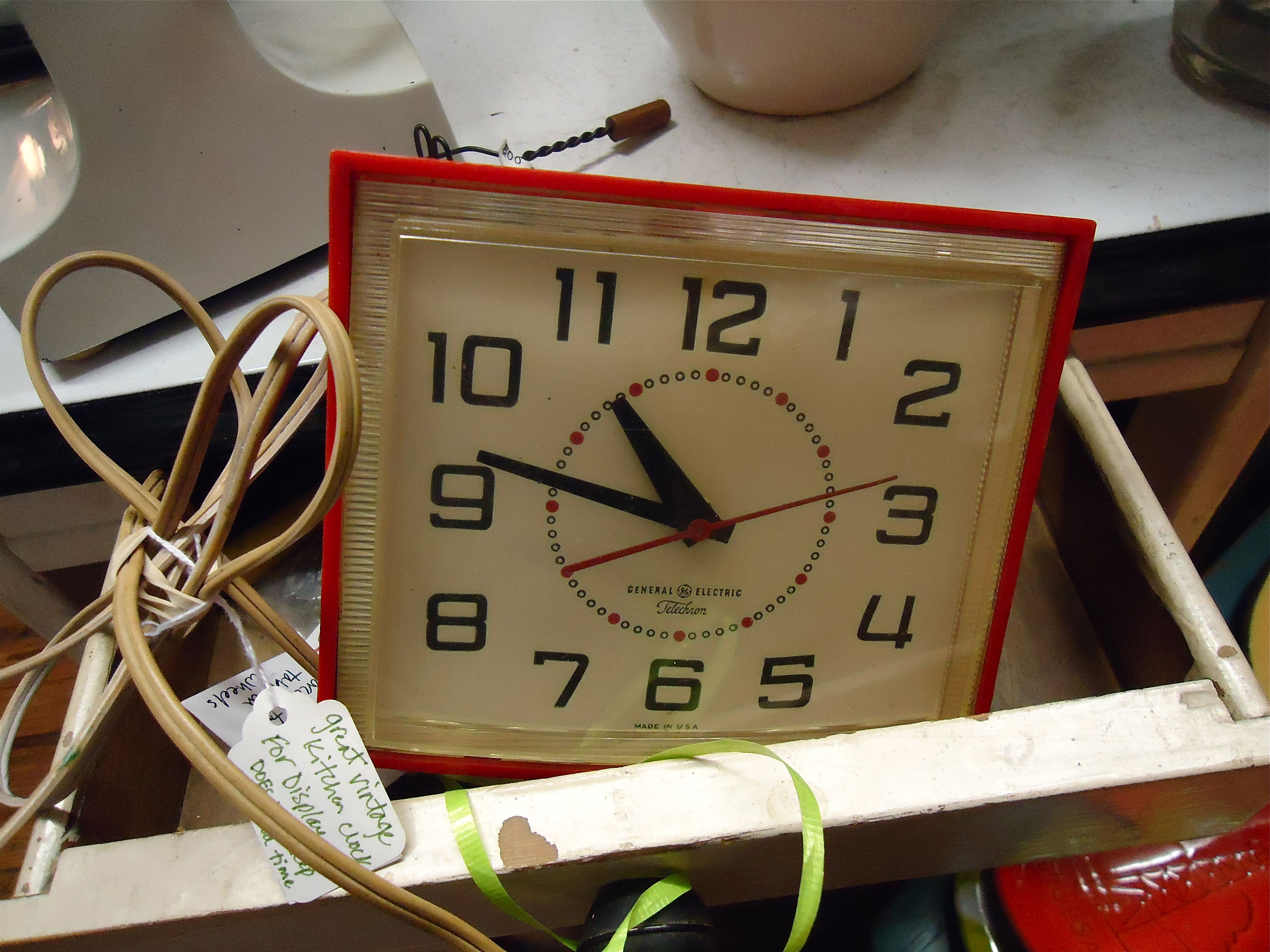 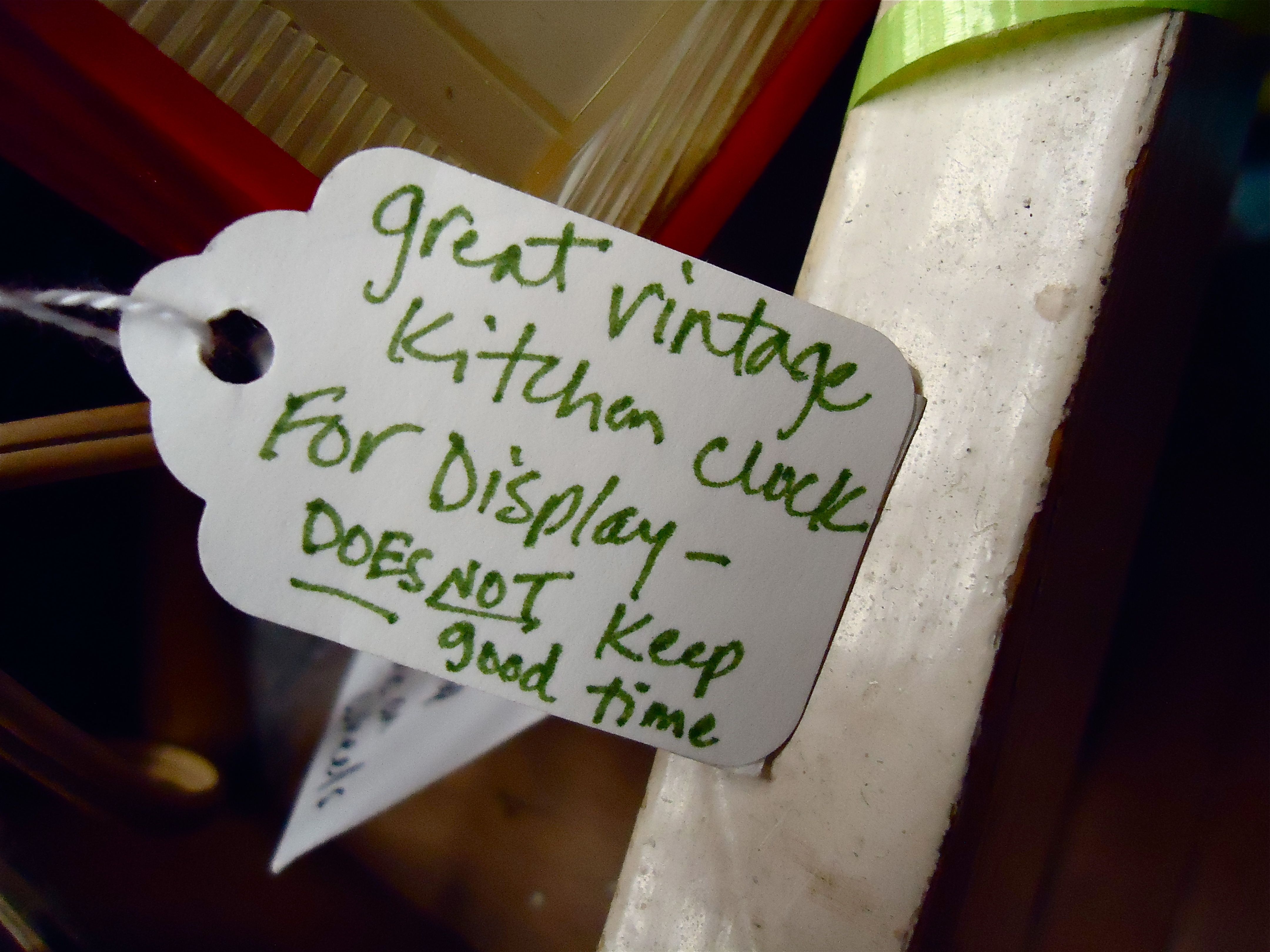 And this BEAUTIFUL orange bird cage to serve as decoration at our bird-themed wedding next year: 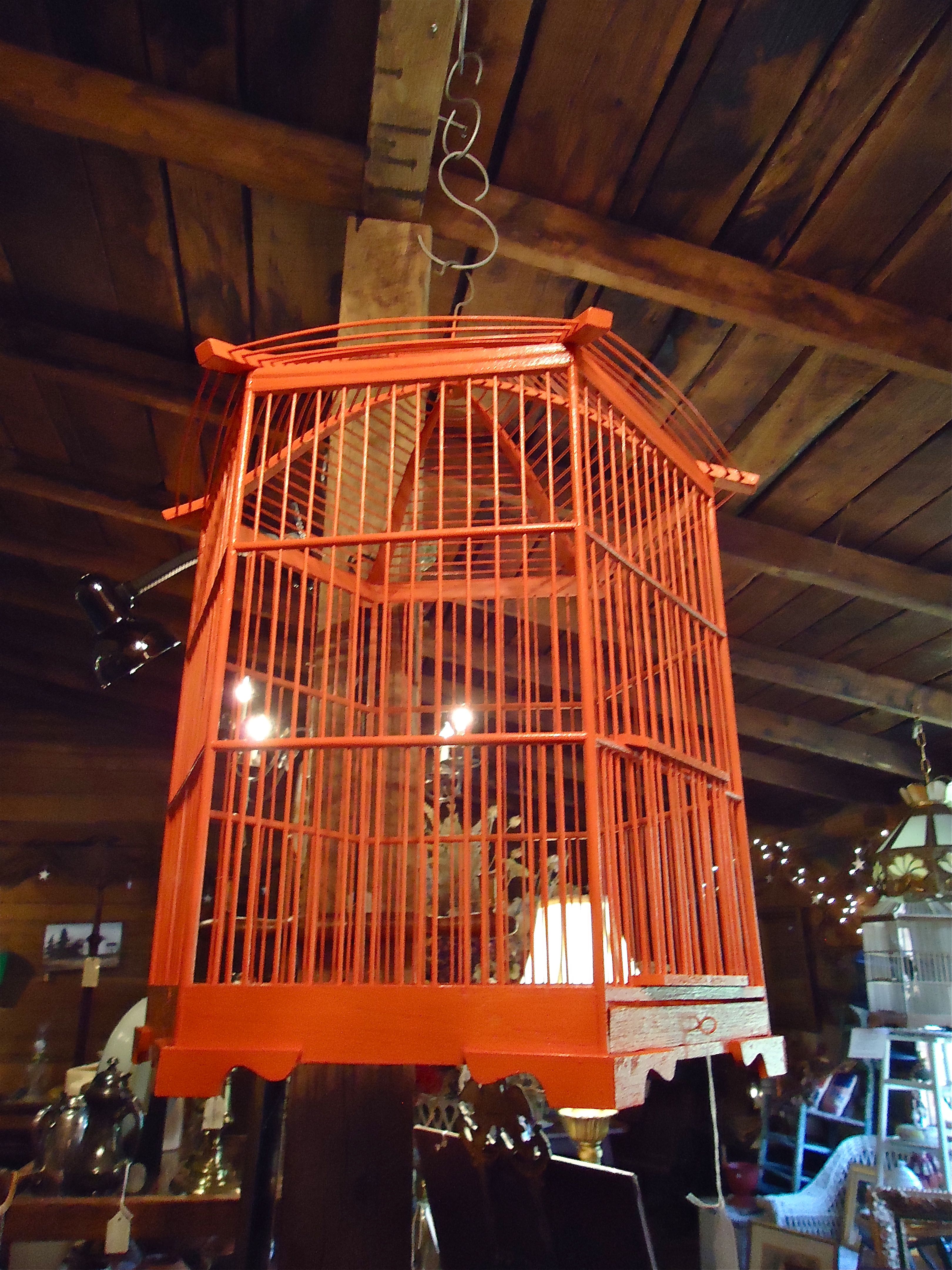 But the former was a little too superfluous to add to our already overwhelming array of vintage clocks and the latter was a little out of my comfort zone in terms of price (at a whopping $99), but I guess it was fun to window shop/dream…Maybe?

::sigh:: Overall, it was a bit of a disappointing trip, but we saw some pretty neat things and John got a great deal on comics. All was not lost.

Have a great weekend! Don’t let Irene blow you away if you live on the east coast…Or fall into any cracks following earthquake aftershocks…I think Mother Nature is PMSing.