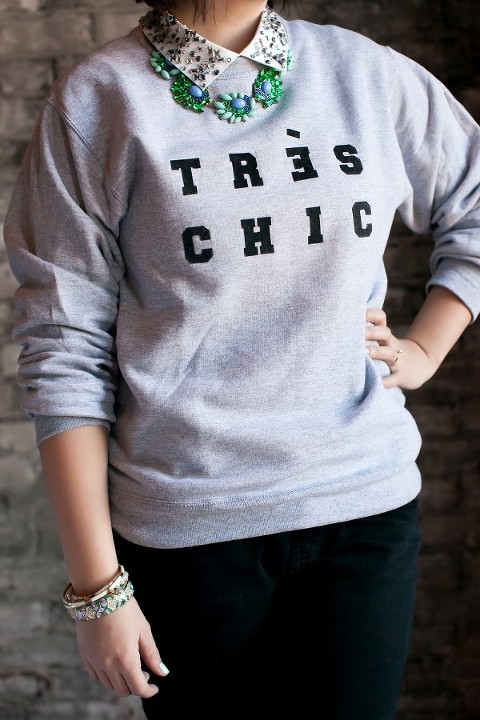 Today, I welcome another “keeping it real” moment to the blog. Did this project go exactly how I envisioned it? Not quite. Am I disappointed? Maybe a little…Am I going to let it kill my enthusiasm for a fun money-saving DIY? Heck no! Truth be told, I’m hoping this is the moment where you all hurriedly scroll to the comments section so that you can leave an enthusiastic “I thought it was intentional!” assurance, but before you do here’s the full story. 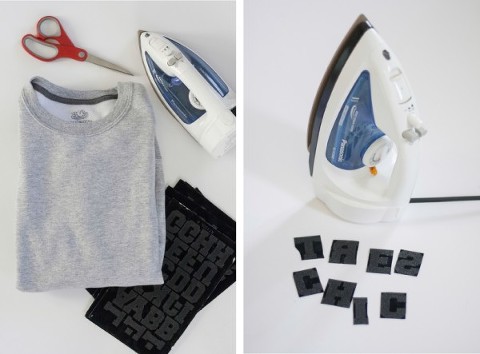 Like most DIY-oriented gals, I’m constantly on the look out for trendy pieces that I can recreate on a dime. The ever-popular “Tres Chic” sweatshirt was a no-brainer – A standard pull over, iron-on letters, some scissors, an iron, et voila! I even happened to have a couple sheets of what I thought were iron on letters buried in the bottom of my craft box, so this project only cost me about $5 (for the sweater, which I picked up from Wal Mart). 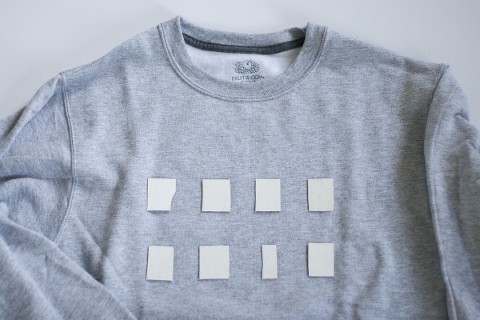 The only problem was that I didn’t have the packaging for the letters, a supply that I had purchased but never used for a friend’s bachelorette party 4 years ago. This is where my problem began – I didn’t have any instructions, so I started off flying a little blindly. As I cut the letters out for my “Tres Chic” graphic, I was fixated on the possibility that it wouldn’t work, that the letters weren’t even iron on at all. But I plopped them down on the shirt anyway, thinking I’d only be out $5 if I messed it up. 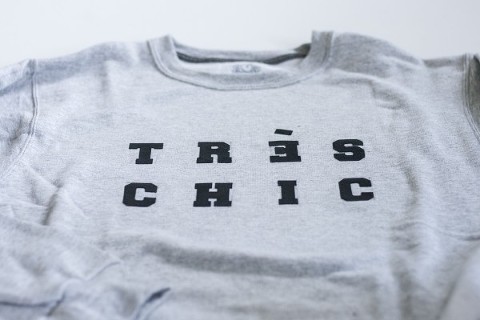 Well against all odds it worked! After putting my iron to fabric and as I pulled each letter’s backing off, my excitement was audible. And that’s when I got to the “E.” That audible excitement immediately turned to an expletive or two, but I kept on going. Luckily, it turned out to be the only casualty of my distraction, and a little accent mark over the offending backwards letter helped to make it feel more intentional – at least to me. 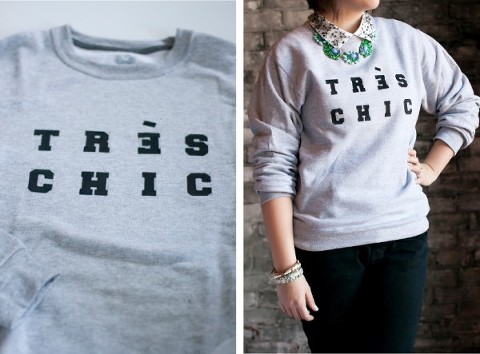 Will I try this one over again? There’s definitely a good chance. But in the meantime, I’m going to smile every time I pull this budget recreation off the hanger. Here’s to feeling “Tres Chic” – with a twist!

P.S. Don’t forget to enter the Paddywax candle giveaway! Reader fans of this brand have been coming out of the woodwork since I announced the collaboration, so I’m excited to spread the word myself, and to give one to one of you! Details right here.

Show Hide 6 comments
« My Kinda New Year {Plus a Giveaway!}
The Options: Monochromatic or Two-Toned »