How To Stencil A Damask Feature Wall 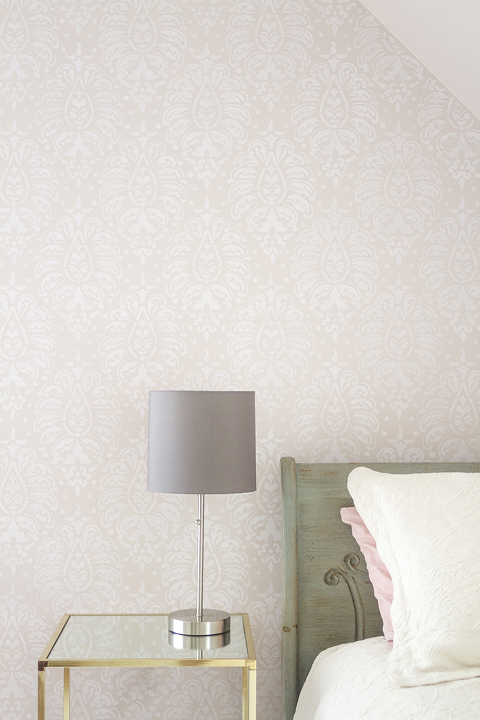 Back in the spring (or was it late winter?), my best friend Erica shot me a quick email asking if I’d help her transform one wall in her extra bedroom using a sweet damask stencil that she had picked out from Royal Design Studio. Since I’m a glutton for projects and any and all grunt work that involves a stellar before and after, you know I couldn’t say yes fast enough. Skipping over several separate vacations and work obligations, and we finally were able to nail down a good weekend to make the project a reality late last month. Read on for the full breakdown on how to stencil a damask feature wall in your own space, plus all the before and after photos that your little creative heart could ever want.

Below, you’ll actually find, not one, but two “before” photos. The first is an image of the space via Zillow before Erica had even moved in, when the upstairs bedroom served as a little girl’s bedroom. Beneath that you’ll see how far the room has come in the past few years since Erica settled in. She took the walls from a multi-colored palette down to a soft and delicate pink, and filled the room with a few key pieces of heirloom furniture to suit the updated, guest room retreat she envisioned. It had already come quite a long way, but Erica felt like it needed a little extra personality, which is where the stencil and I come in. 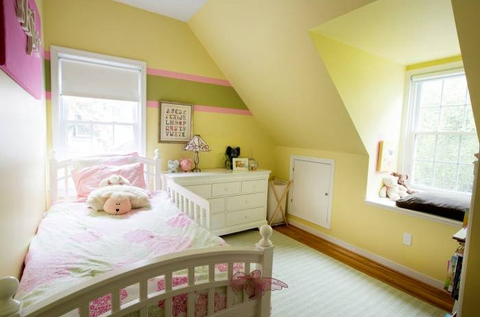 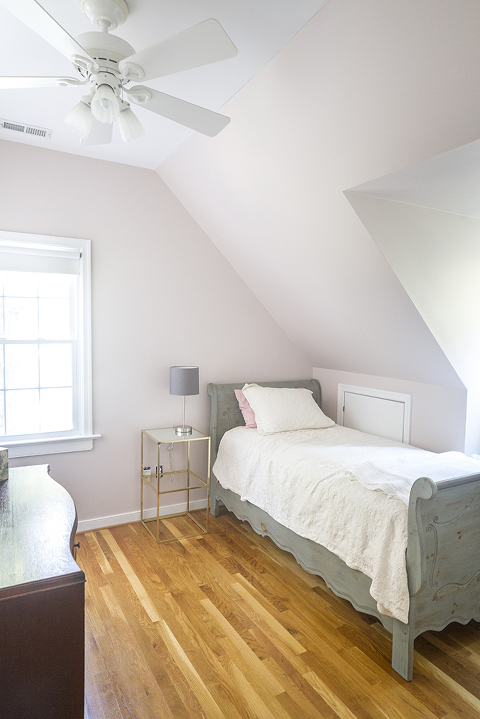 Since we only planned to add the stencil to one wall in the room, we made sure to prep the surrounding walls, ceiling, and window with painter’s tape and several sheets of newspaper. This allowed us to roll the top coat paint color right up the edge without worrying about getting color on the adjoining walls. Next, we laid down a drop cloth on the floor beneath the wall to be painted, and a second drop cloth out on the back lawn where we planned to spray the stencil with adhesive. 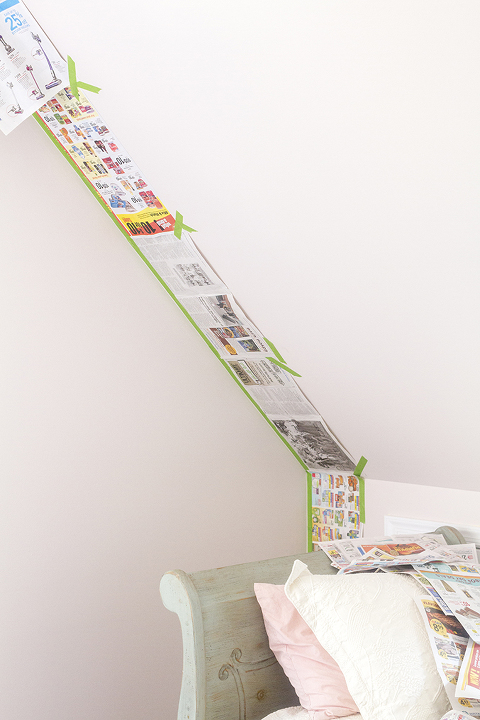 With the prep work done, we finally moved on to the stenciling. Our system went a little something like this: Erica took the stencil outside, laid it top side down on the lawn on the drop cloth, sprayed the back of the stencil with a thin and even layer of stencil adhesive, brought it back up to me where I stood on the ladder, and then I finished by taping it into place with painter’s tape and pressed down all of the edges with my finger tips. It’s best to give the adhesive on the stencil a minute or two to get tacky before laying it on the wall—the distance between Erica’s back yard to the upstairs bedroom where we were working was the perfect timeframe. 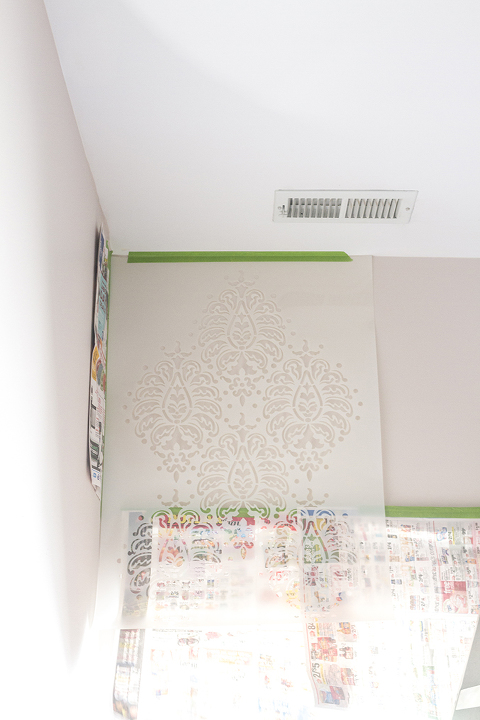 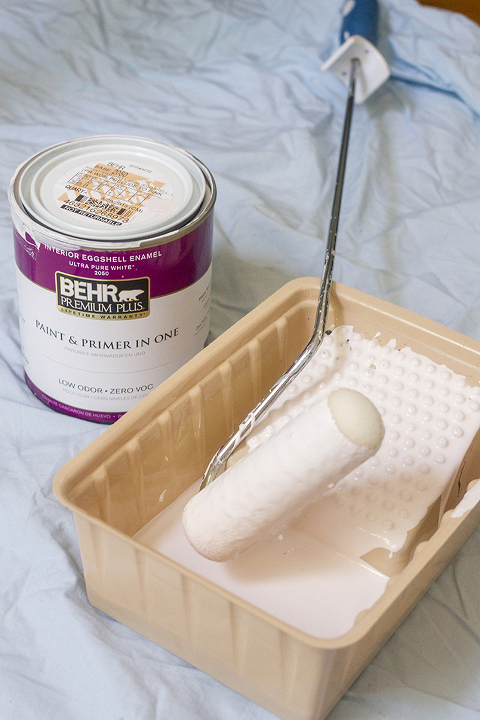 We also had a system in place for the painting. Erica rolled the paint on the foam roller, then rolled off the excess on a piece of poster board, and then she handed the paint roller to me, and I rolled the paint on top of the stencil. The all-important step here is to roll the excess paint off on the poster board. We found that heavy paint on the roller equated to slightly blurry lines on the finished stenciled section since the paint snuck under the edges of the plastic. Rolling off the extra paint beforehand means that you might have to refill your roller twice per stencil, but less paint typically results in crisp lines. 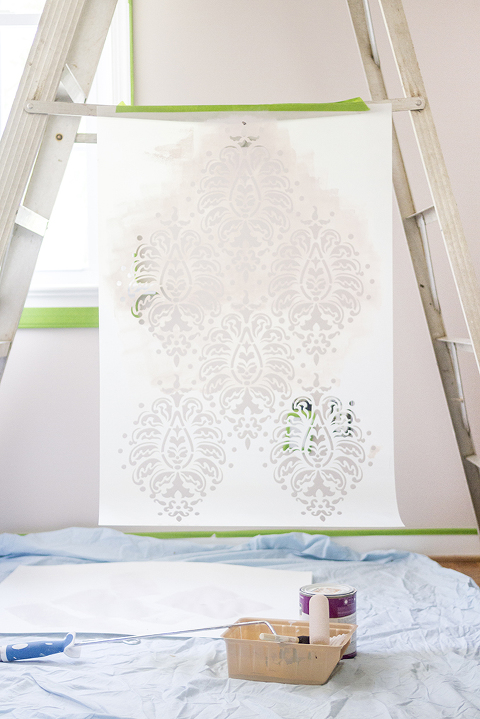 After rolling on your paint, immediately remove the stencil and stick it somewhere to dry for about 10 minutes or so (we taped ours to the edge of the ladder to hang dry). You may also want to wipe off the back of your stencil in case paint seeped onto the underside. We rolled on just one coat of paint as opposed to two because, that way, the finished damask pattern had a bit of a lacy, delicate look to it. But you can do two coats if you prefer a stronger, more high contrast pattern—just make sure to leave the stencil in place and give it roughly 20 minutes to dry before adding a second coat.

Continue stenciling by respraying the back of the stencil with spray adhesive every 3-4 sections (whenever it starts to feel like it’s not properly adhering to the wall), and allow the paint to dry before repositioning the stencil over top of it. Speaking of repositionning, to do so, lay one edge detail of the plastic stencil over a previously painted section on the wall to ensure proper pattern flow. 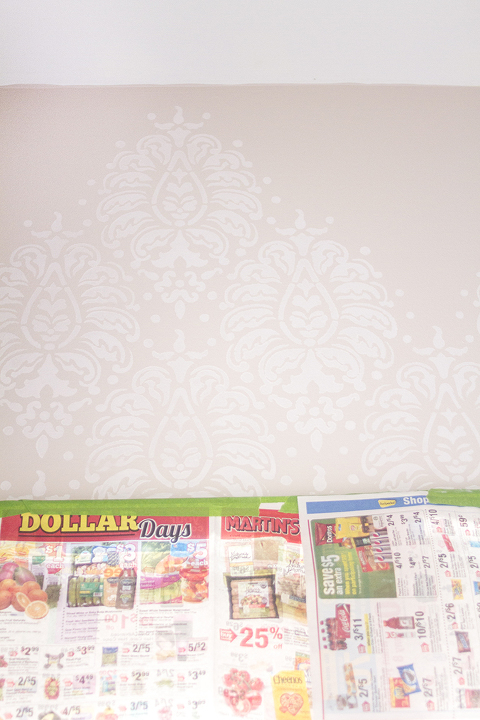 A few other tips? Keep a bucket of soapy water and rags nearby in case you end up with any drips on the trim, adjoining walls, or floor. This also can be used to wipe down the back of the stencil as needed. And when you get to a corner or the edge of the ceiling, it can be a little tricky, but you’ll just need to gently bend the stencil into the curve and roll as close as you can to the edge of the wall. You can use a foam paintbrush to dab right into the corner, but that’s optional. We started doing it that way, but ended up just rolling right up to the edge, and it turned out just fine. Our large damask stencil actually came with a separate ceiling piece that was much smaller and made that topmost line much easier to get just right. Finally, use as little paint as possible, and don’t push too hard on the roller, otherwise you will get bleed through and wonky lines! 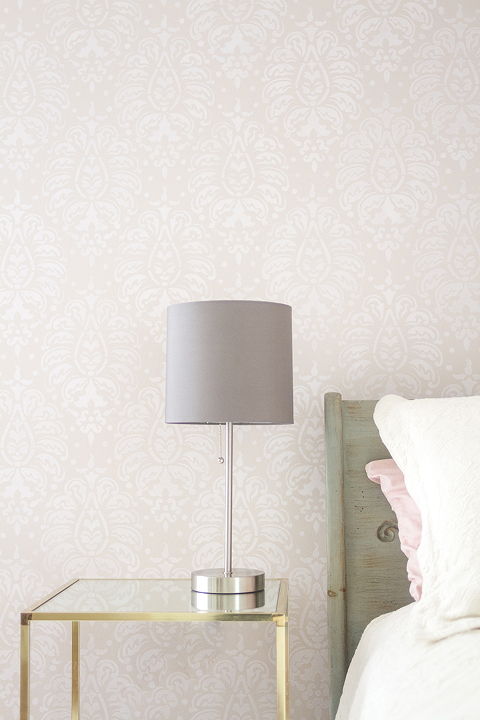 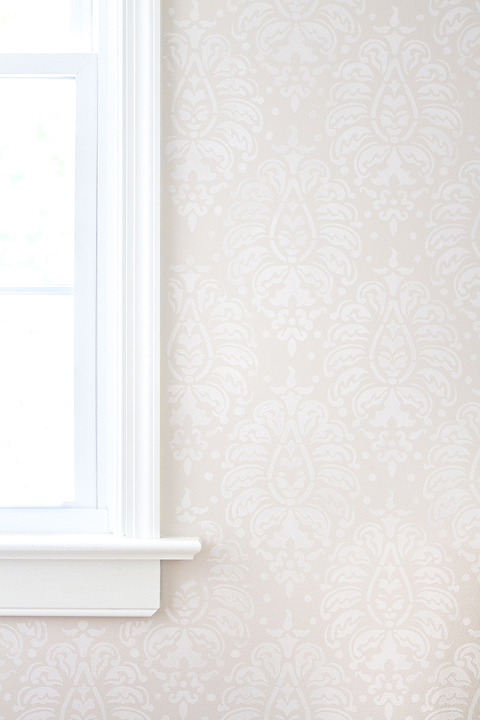 Although this project ended up taking the entire day and the lines aren’t perfectly perfect, Erica and I both adore the finished product. The pattern is just edgy enough to feel modern, but still is a sweet nod to vintage design, which suits Erica’s 1950s home. Would you try the look in your own home? If so, make sure to buddy up with a friend, and have lots of low key projects to work on while you wait on the paint and stencil to dry. And don’t forget that it’s going to be worth it all in the end—trust us! 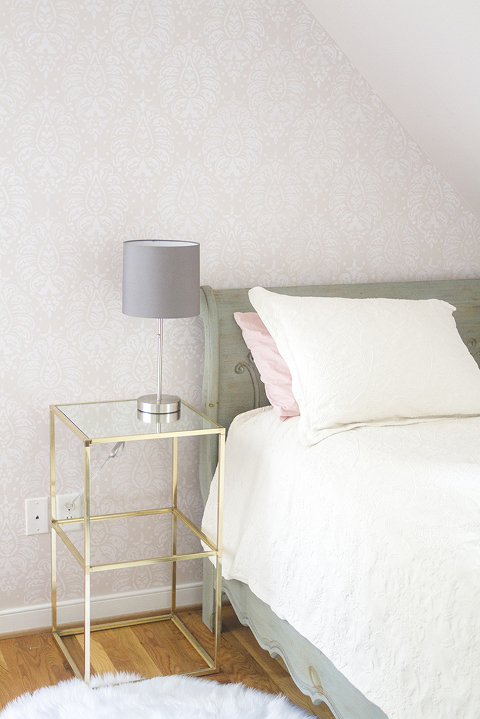 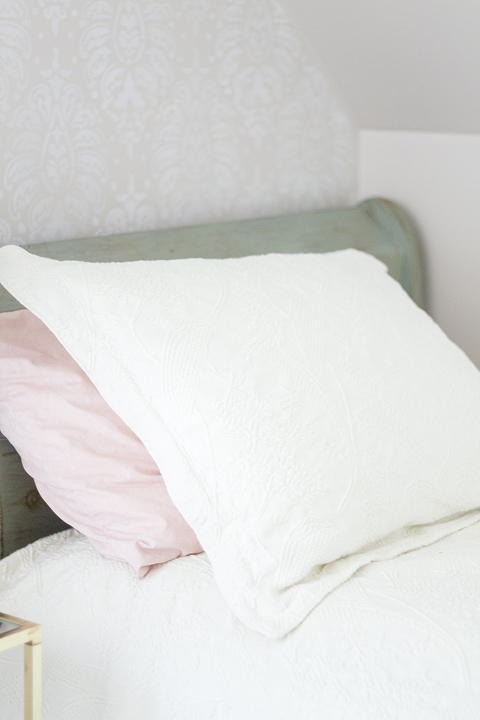