Our Stay At The Watergate Hotel 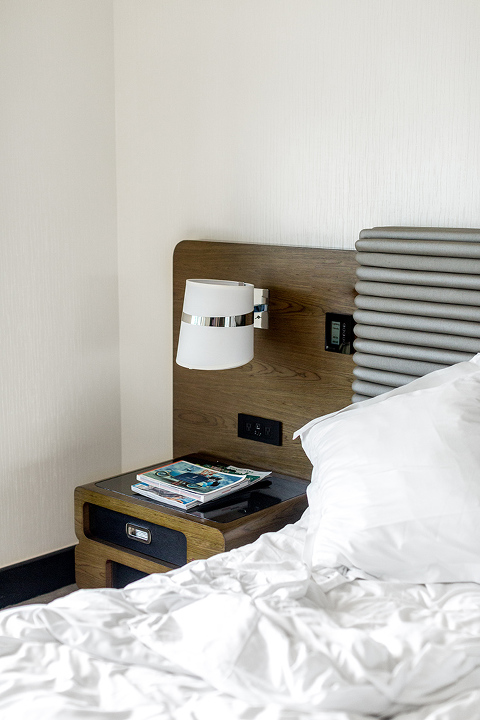 I know, I know…You’re probably sick and tired of hearing about the trip I took with my sister to D.C. earlier this year, but I just couldn’t quit without giving you more of the personal story behind our adventure.

As you may remember, I worked with a brand on the two earlier posts that introduced and explained our motivation for heading to the capital (catch up on those here first, and then here). For legal reasons per the brand I wasn’t able to talk as openly as I would have liked about the trip. I would have had to get written permission from the composer we saw, the restaurant we ate at, etc. to make mentions of them throughout the posts, and it just would have been too time-consuming. Now that the campaign has wrapped up, though, the brand said I’m free to spill all the beans—and that’s exactly what I plan to do today! 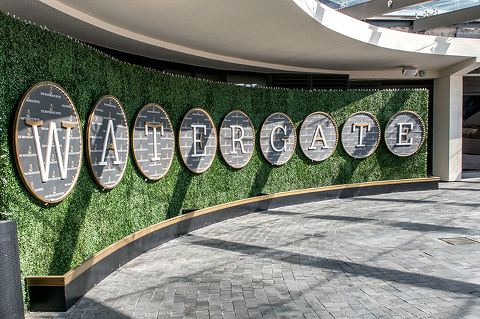 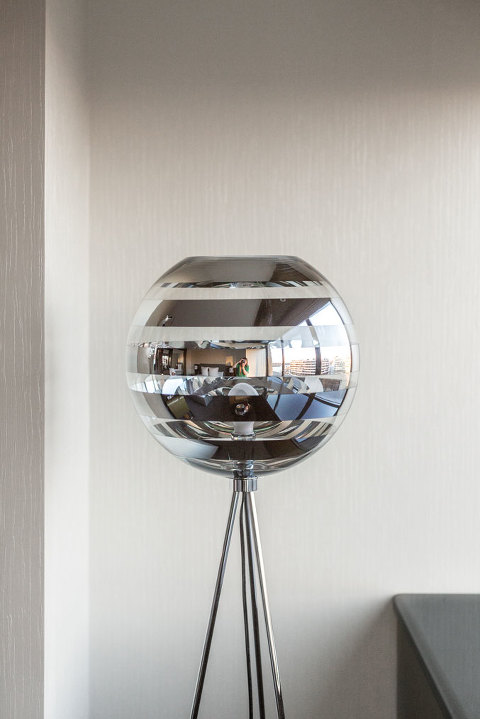 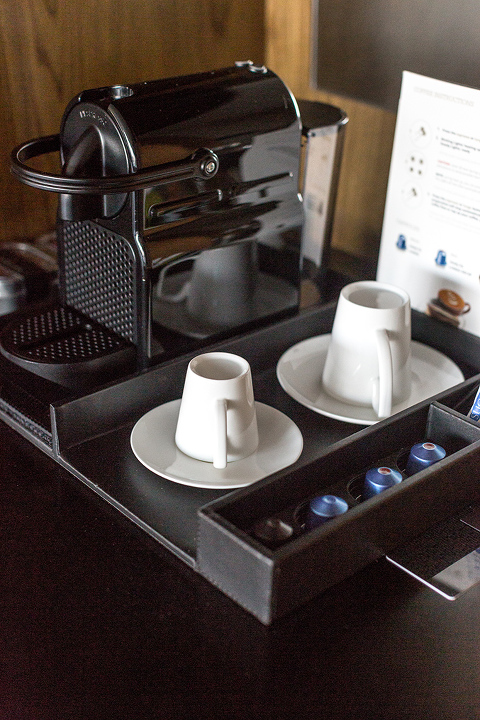 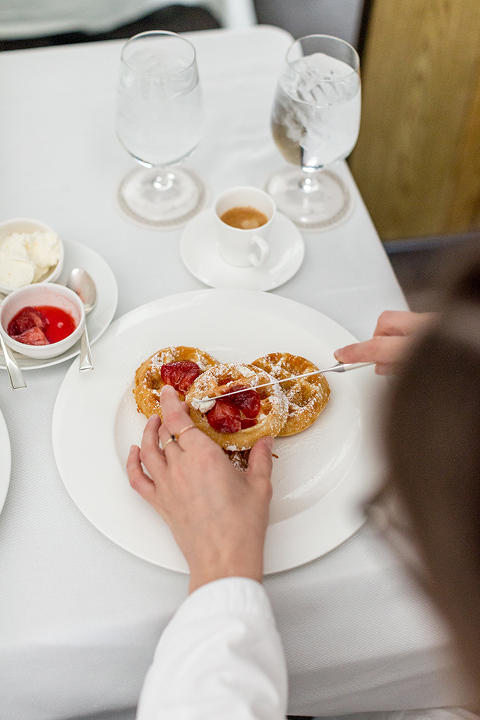 If you’ve been following along with this story since the beginning, you already know that we stayed at the Watergate Hotel. This was my first time staying at the hotel, and I can tell you right now that it won’t be my last. (By the way, today’s post isn’t sponsored in any way, so no one is paying me to say any of this!).

Our dad is actually the one who suggested that we stay at this particular hotel, mainly because he knew it would put us right next to the Kennedy Center, which we planned to walk to that night for the Philip Glass concert. 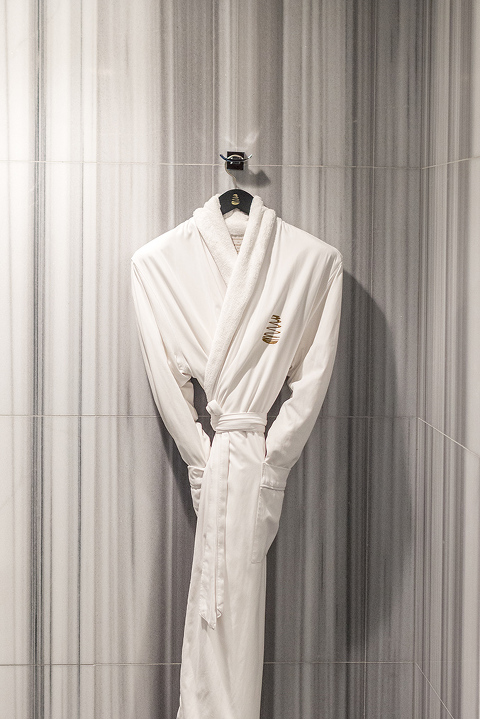 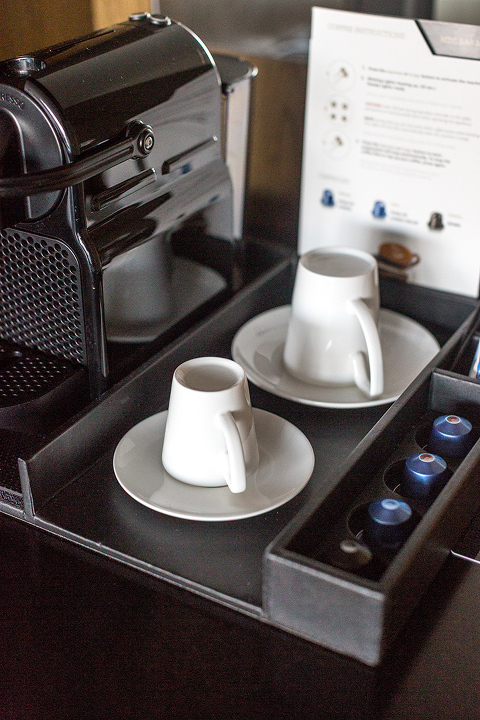 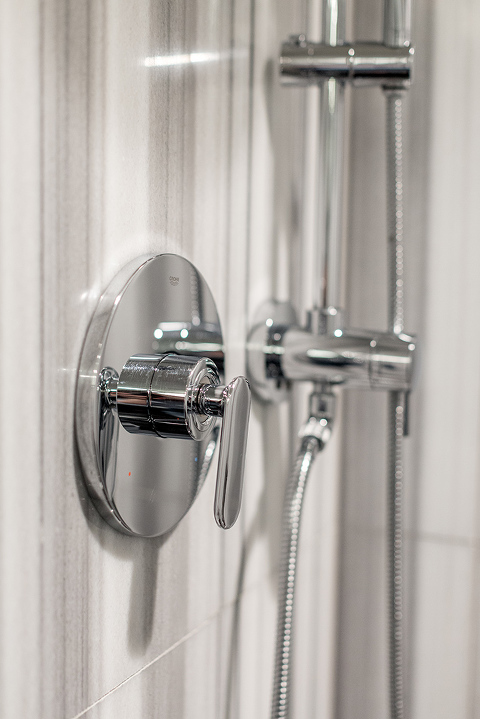 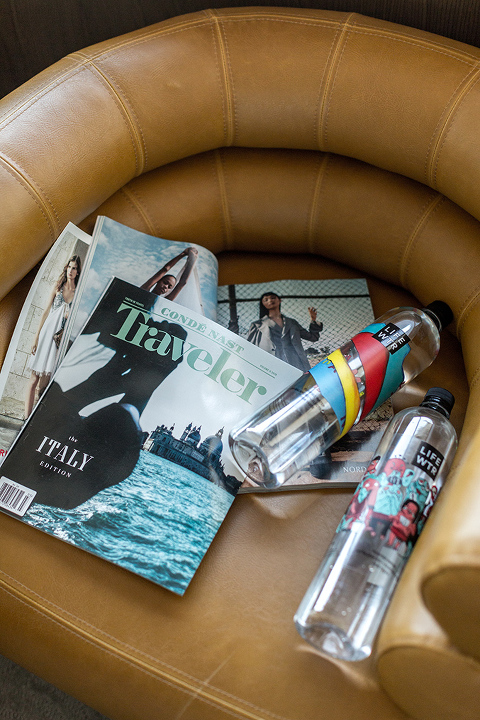 My sister and I almost immediately hit a bunch of bad construction traffic once we got into the city, and ultimately got rerouted dozens of blocks from the hotel. We’re not city girls by nature, so we got a little turned around. We made the most of it, though, because GPS ended up taking us straight down the stretch of embassy offices, and it was so cool to see all of the different architecture and landscaping unique to each country. 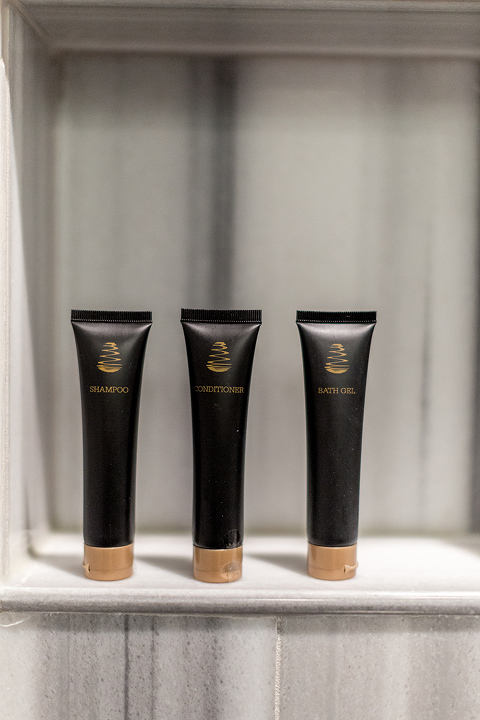 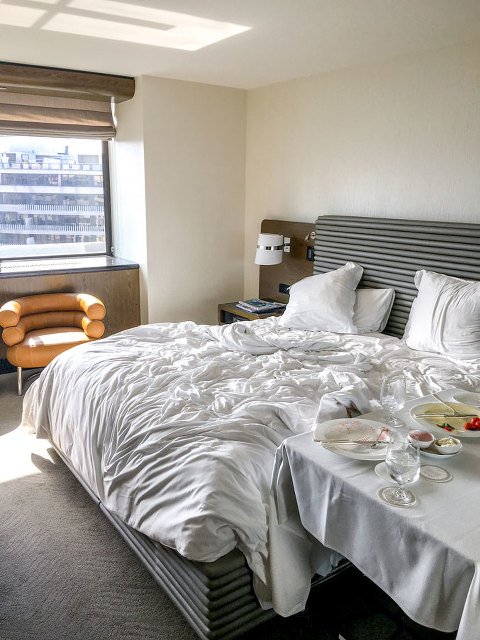 We eventually found our way to the Watergate and got settled into our quaint-but-cool hotel room. Again, because of legal reasons, I wasn’t able to give a full tour of our room in the first two blog posts about the trip, so today you’ll see lots more of the space, including the massive bathroom, views of the water, and a look at our scrumptious bed-side breakfast. 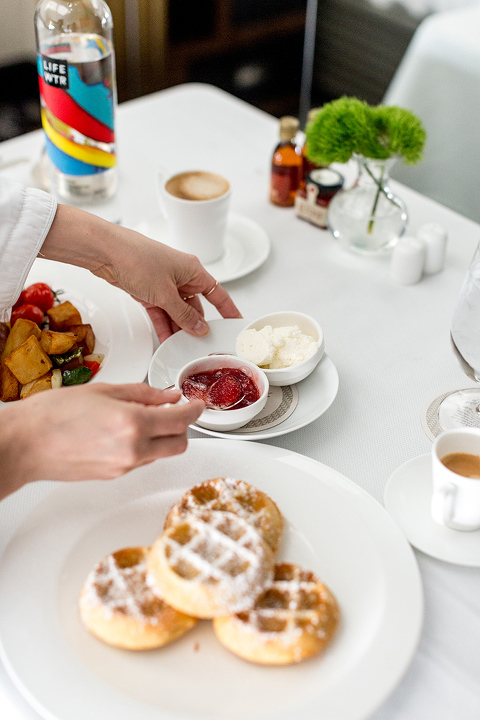 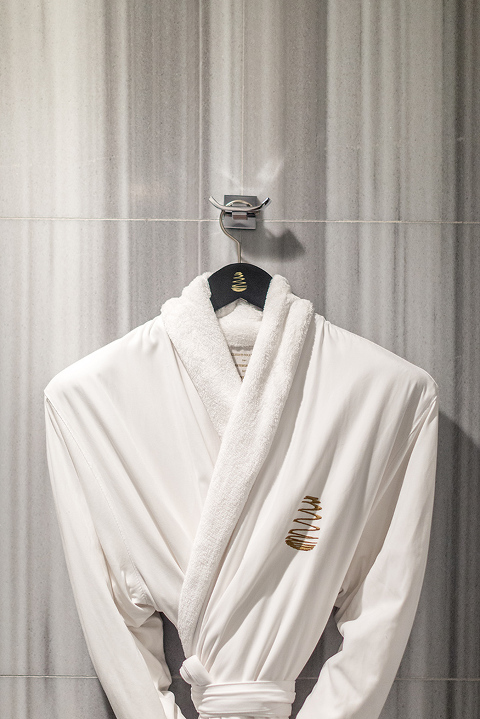 My sister jumped right into the shower almost as soon as we had set our bags down, but that gave me just enough time to snap a photo and video tour of the hotel room. After that, we both lazed around in official Watergate bathrobes, decompressing from the semi-stressful drive. 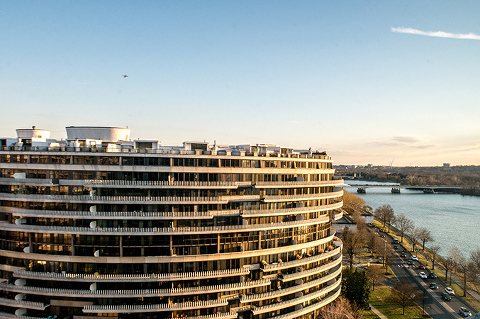 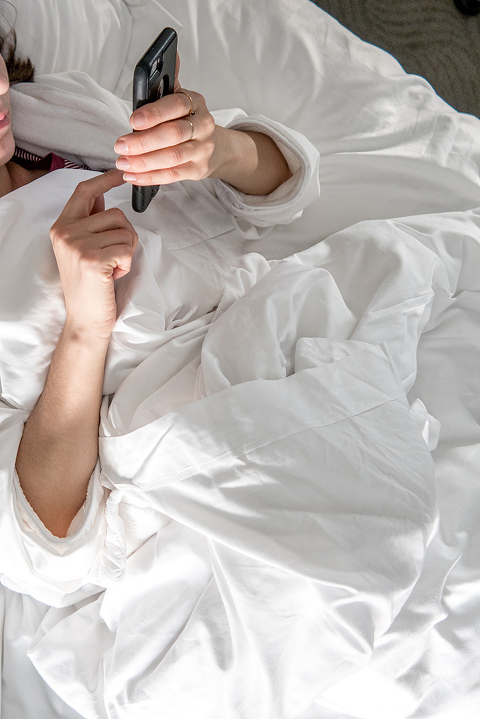 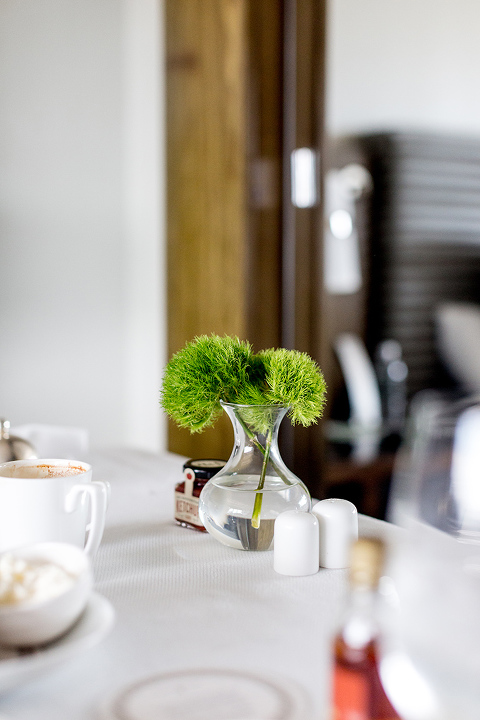 At about 5:30 or so, we went down to the hotel restaurant for a quick dinner. I’m not sure if it was leftover nerves from the drive or just a bit of anxious excitement for the concert we were going to see later that night, but neither one of us had a big appetite. A glass of wine each and some appetizers set us up nicely, though, and it was fun to people watch. Remember that it was pretty much the tail-end of winter during our stay, so the place was packed with people looking to escape the cold. 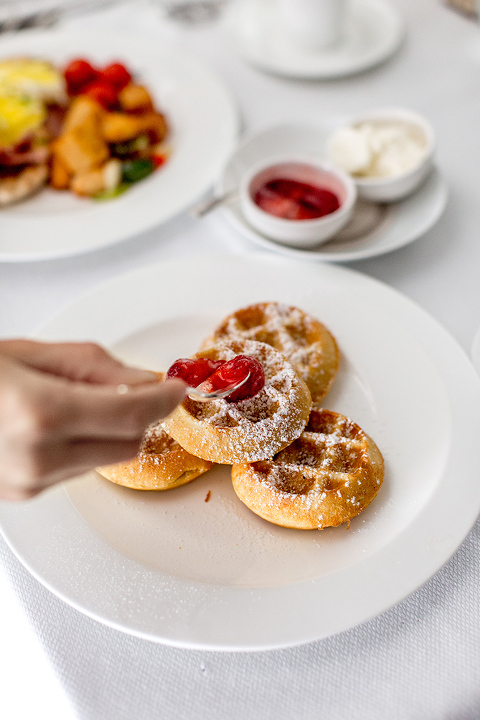 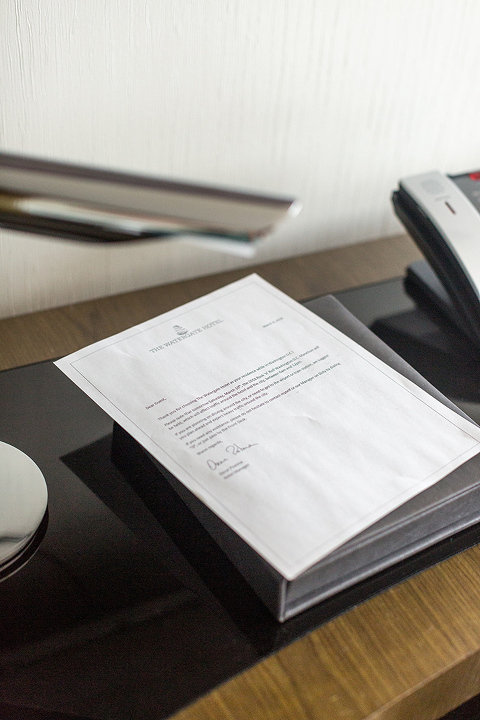 Next, my sister and I hit the sidewalks bound for the Kennedy Center. The concert hall was even closer than we expected it to be (thanks, Dad!) so we didn’t have to spend too long out in the elements that chilly night. Even still, we high-tailed it and breathed a huge sigh of relief once we were inside the glowing lobby at the Kennedy Center.

I don’t have many photos to share from inside the concert because I wasn’t sure what their policy was on photography, but you can hop back here to Part 2 to see a couple of quick shots. You’ll also learn a lot more about the concert and how it felt to be part of the audience at such an amazing event. We saw Philip Glass, and he was just incredible—one of our favorite composers, for sure! 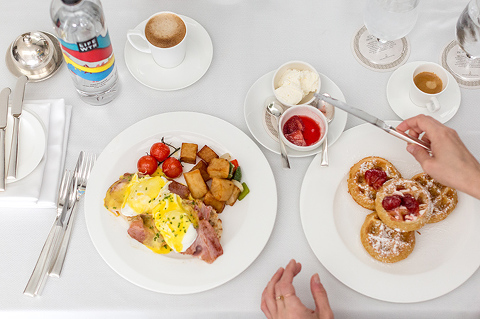 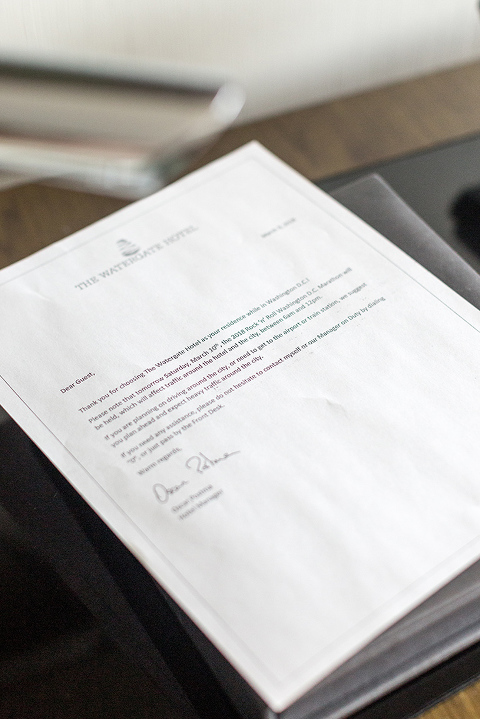 A couple of hours later, the concert was behind us along with another frigid walk back through the cold to our hotel room. I’m not sure if it was memories of the music or just the super comfy bed in our room, but my sister and I both slept like babies that night.

The next morning we got a note from hotel staff that said we should expect traffic that day because of a marathon going on nearby in the city, so we decided to take our time and treat ourselves to breakfast in bed, something I had never done. Turns out it’s just as decadent as you’d think to be served a gourmet breakfast right in your hotel room, and we stayed in our bathrobes most of the morning, chowing down on poached eggs and waffles, and filling up on espresso coffee. 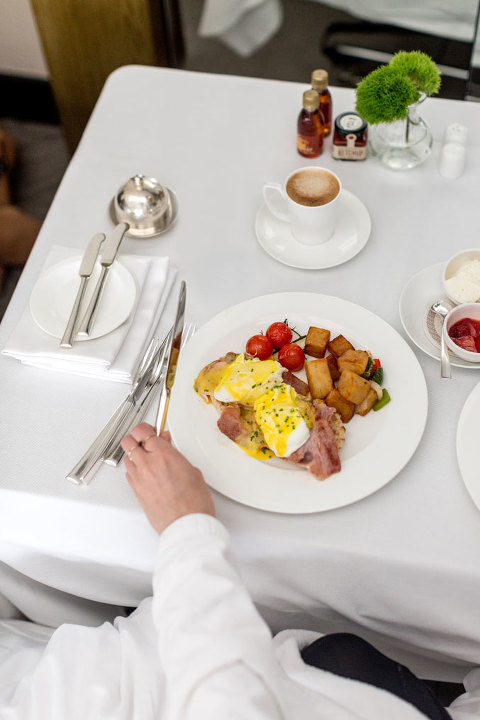 Anyway, that’s about all I have left to say about our trip to D.C. to see Philip Glass. It was such a dream come true to finally hear him play in person, and I really did think that the Watergate was such a fabulous hotel. I can’t wait to visit again and to see more shows at the Kennedy Center. Have you been before?

Click ‘Play’ below on the extended cut of the video I put together of our trip, which shows a lot more of the hotel room and (of course) that delicious breakfast. Cheers!