Why We Got Rid Of Our Sunroom Décor 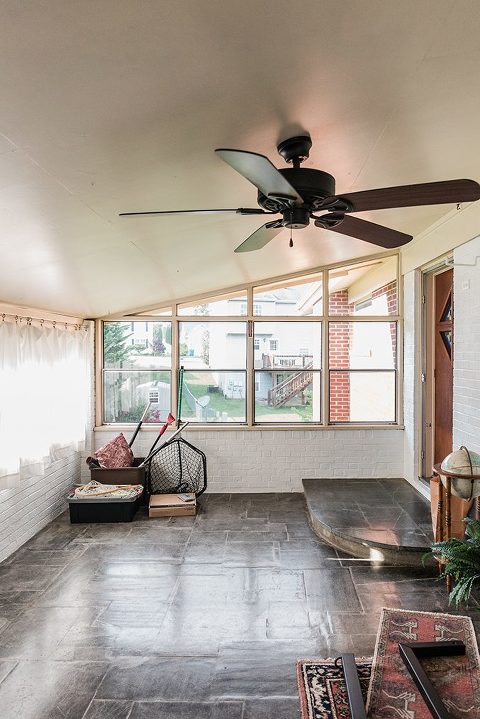 It’s not very often that I come on here to talk about making UNDER a room, but that’s exactly what I’m going to share with you today. It’s a bittersweet tale, to be honest, but I promise that it’s all for the best. To cut to the chase, we got rid of all the décor, furniture, and accent lighting in our beloved sunroom.

You might be asking yourself why on earth we would do this, especially since I’ve talked at length about how the sunroom has always been one of my favorite rooms in the house. The truth requires some winding explanation, but before we get to that, let’s revisit what the sunroom looked like up until a week ago. 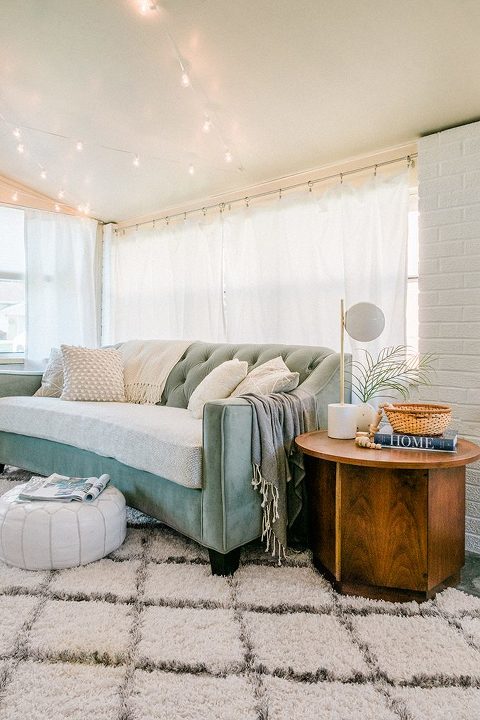 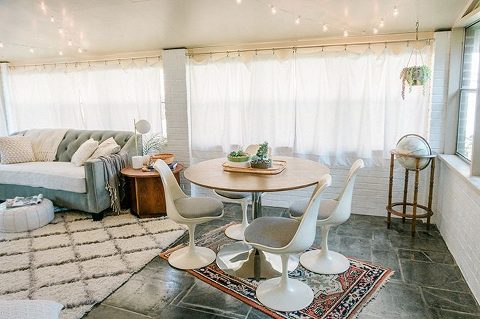 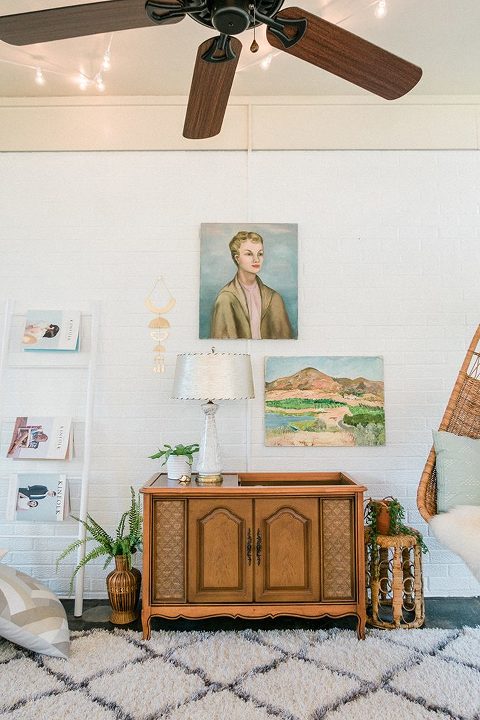 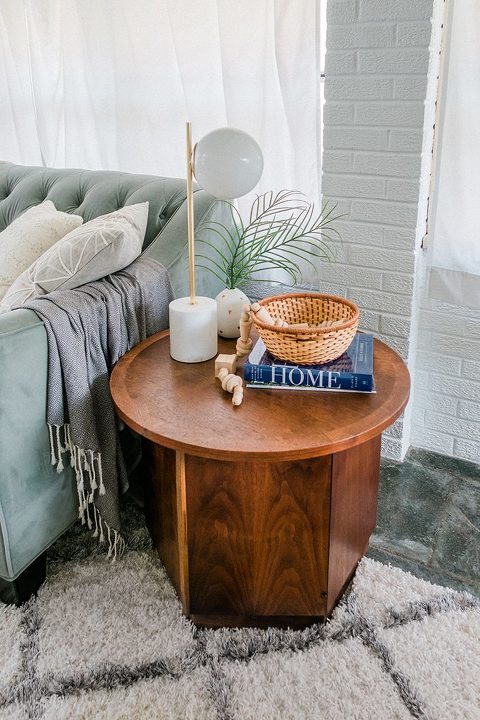 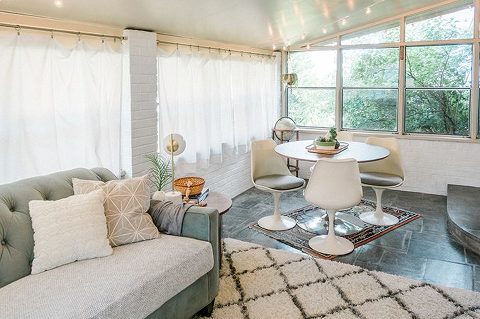 Practically since the day we moved into our house, we had the sunroom laid out to act as something like a combination sitting and dining room. We had a full size sofa arranged under the windows along the side of the room, an antique hanging basket chair near the front door, and the vintage record player that John’s parents gave us set up beside the basket chair. On the opposite side of the room, we kept a round pedestal table surrounded by a set of mid-century swivel chairs scored on Craigslist.

The room was intended to be a bonus living space that we could use in addition to our slightly more formal living room upstairs and lounge-like family room downstairs whenever the mood struck. I loved it more than I can say. Every time I went into the sunroom (or even just remembered that we had the space!), it felt like Christmas morning. Before owning a home, I had always dreamed of someday having a sunroom where I could sneak off to enjoy a good book and heavy dose of natural light.

The problem was that I had always imagined air conditioning in those daydreams. The fact of the matter is that, after four years of living here and living with the uninsulated room as-is, we realized that we would never be able to use the space on a regular basis.

The sunroom must have originally been a covered porch before the previous homeowners “finished it off,” so there was no heating or cooling to speak of, and the thin windows and brick walls just barely kept out the elements. There were maybe two realistic times during the year when we could actually sit out in the room comfortably: late spring, and early fall. That was it. 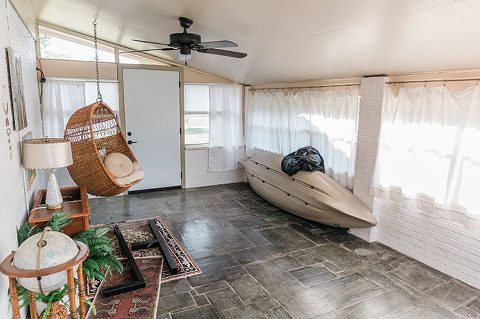 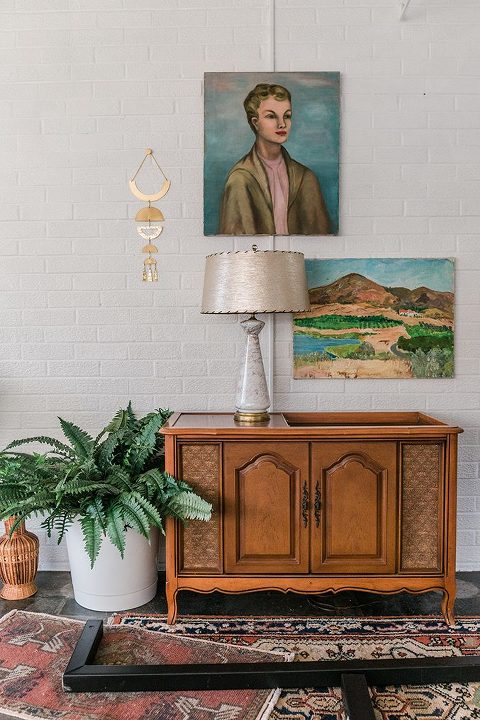 Even despite coming to that sad conclusion a couple years ago, I stuck to my guns and kept the room fully outfitted with décor. I would tell myself that I could sit out there a few weeks during the year, and it was “absolutely worth keeping it all decorated for Instagram photos,” so the sunroom became something like a museum display. It was place for me to smile at every now and then when I felt like sticking my head out the door to look before retreating back inside to the cool A.C. or warm gas heat. As you can see from those photos above, though, I finally decided to own up to the reality of the situation.

Lately, John has been talking about getting into guided fly fishing, something I know he’d be really good at and would love to do part-time in addition to his day job. Taking on this new role means he’d need to add quite a bit of outdoor gear to his collection, so, a few weeks ago, he and I were brainstorming where on earth we were going to put it all.

Out of nowhere during our conversation, it came to me: the sunroom. I sat there internally weighing my options before making the suggestion out loud because I knew that I needed to be 100% on board with the change before even putting it on the table. I wish I was joking when I said that I almost had tears in my eyes when I finally spoke up, but it’s the truth. Anyway, I finally did tell him that I would be willing to sacrifice the sunroom to his fishing storage, and it was ultimately the option we went with. 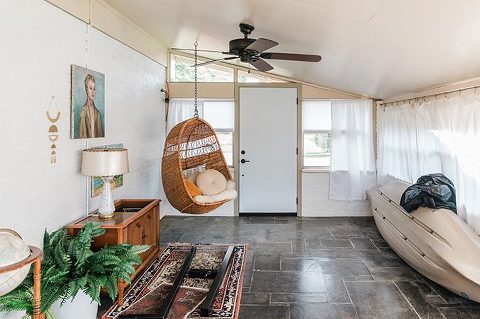 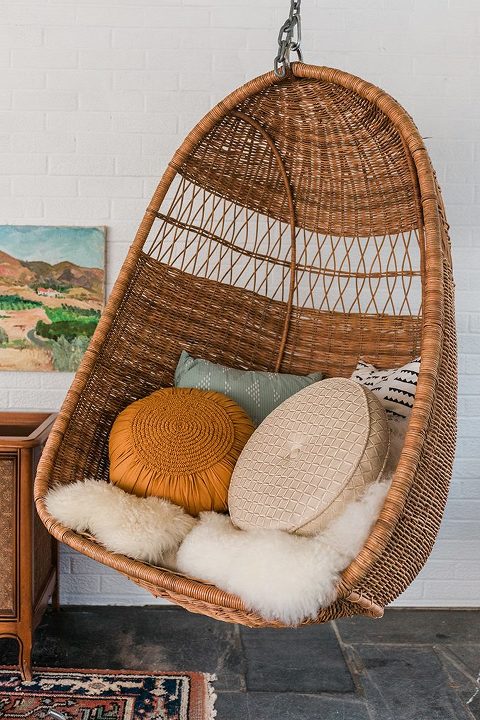 I clearly have a little ways to go with the clear-out—namely the hanging basket chair, some art, and rugs—but the room is pretty much empty at this point, ready for him to start filling it with gear. I can’t decide if I should relocate those few lingering items in our own house, or sell them. If you have suggestions or ideas, by all means, leave them in the comments at the end of this post! I could use a little push, I think.

At any rate, you might now be wondering what happened to the rest of the décor and furniture. Well, the table and chairs actually ended up in our lower level family room so we can still have a secondary place to eat dinner when the mood strikes. The rest of the stuff, though, went over to my parents’ new house. 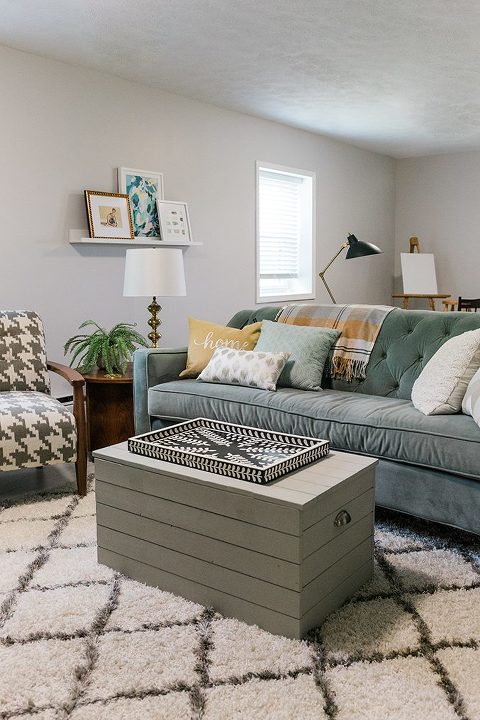 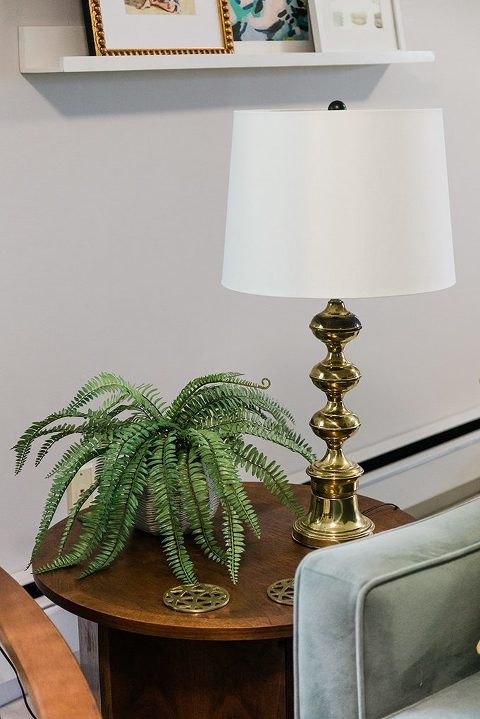 If you’ve been following along since their move back in April, you may remember that a water pipe burst in the finished basement of the house right before they moved. Since the house had been vacant at the time, the water was left unchecked, so the damage was pretty extensive. The entire finished basement flooded, so the drywall, ceiling, and floors all needed to be replaced.

The restoration work was finished a month or so ago, but my parents hadn’t gotten around to furnishing or decorating the room. They went back and forth over a final function for the space, but (after a little enthusiastic pushing from us) they decided to turn part of the basement into a cozy rec room. Luckily, we had an entire room’s worth of furniture that we could give them to bring the look to life for free, so that’s exactly what we did. 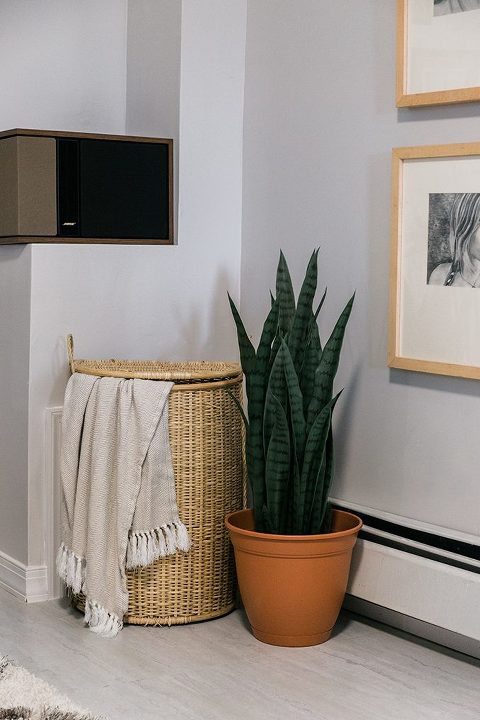 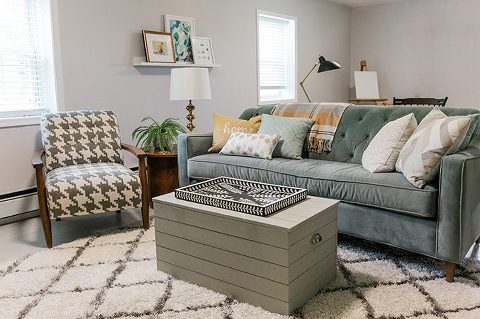 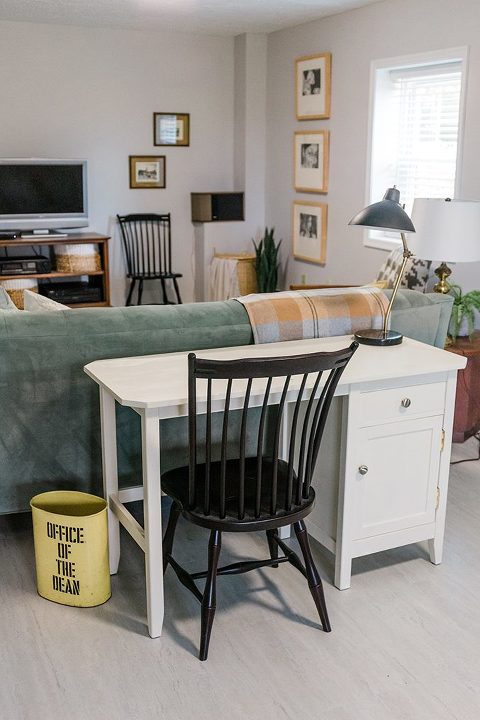 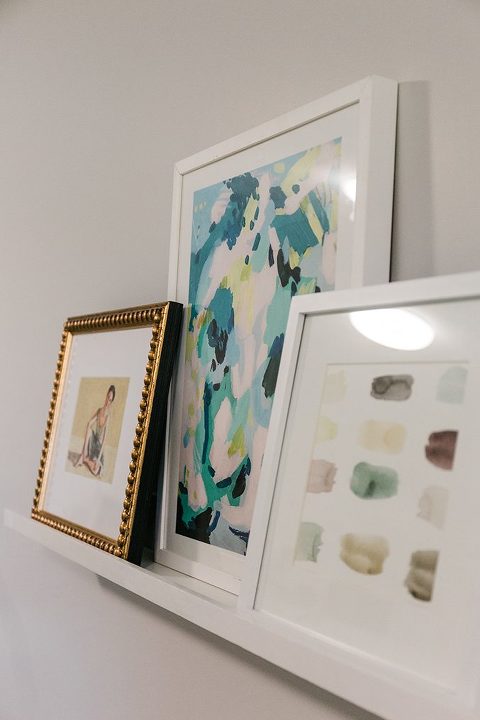 We brought the sunroom couch over, along with a ton of throw pillows, the rug, side table, and even some lighting and art. My parents already had a desk they wanted to use for painting and drawing, so we set that up right behind our old sunroom couch so that people could hang out together—whether they’re watching a movie or working on art.

You might also recognize the houndstooth La-Z-Boy chair that used to be at our house, plus some faux plants and framed prints that came from our spaces, too! Letting go of my decorated sunroom sitting space was really hard for me, but seeing most of it end up in my parents’ new house really helped cushion the blow. (Oh, and don’t worry—I’m fully aware and ready to admit that I’m being a pitiful brat about this whole situation!) 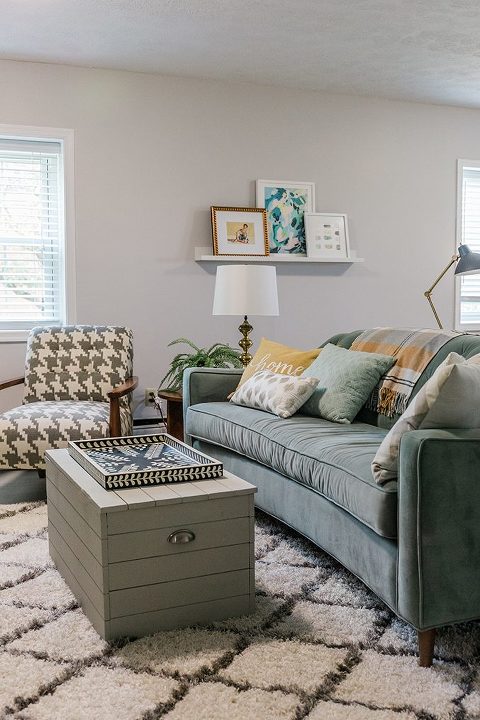 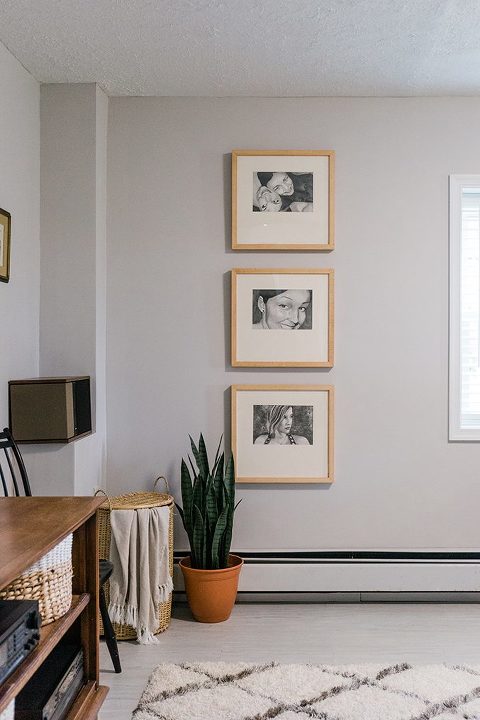 So, what do you think? Would you have “made-under” your own sunroom to clear out space for your hubby’s new passion project? Or would have you found a different solution? We had thrown around the idea of renting a storage unit or buying a new shed to store the raft he planned to buy for fishing trips, but there was no turning back for me when I realized that we just didn’t use the sunroom often enough to justify keeping it as a living room year-round. I’m excited to shift my focus now to support John in his new fishing endeavor—and I’m also grateful to have photos of our old sunroom, like the one below, to look back on!