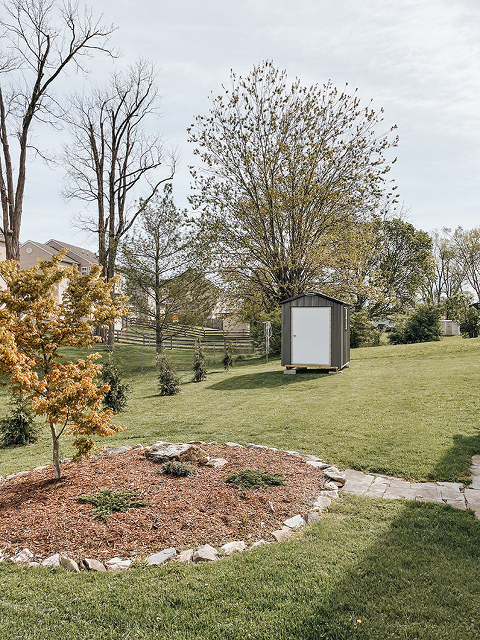 Grab a cup of coffee or tea and settle in because today’s story is a long one! Here’s the deal. I’m finally sitting down today to chronicle everything that has led to this year’s overhaul of our backyard. If you’re just tuning in, we’ve lived in our 1960s ranch for the past five and a half years, and the bulk of that half decade has been spent perfecting every square inch (and I mean every square inch) of the inside of the house. I’ve painted every room and closet, torn down wallpaper, replaced light fixtures, tiled—you get the picture.

It has been a long process that I wanted to take my time with, and I also really wanted to focus all of my attention on those interior projects, so I didn’t think twice about the exterior of our home. We did a few things here and there as needed, like removing overgrown shrubs, and doing general yard work to keep the place looking presentable, but it was always the bare minimum. Until this year. 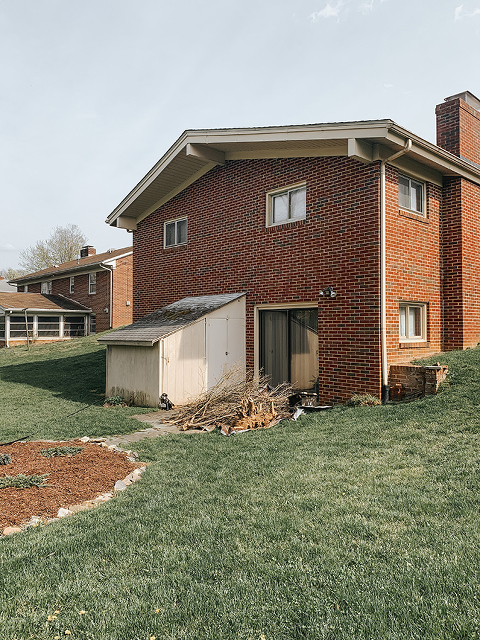 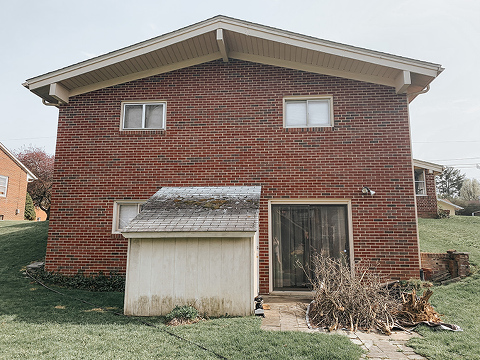 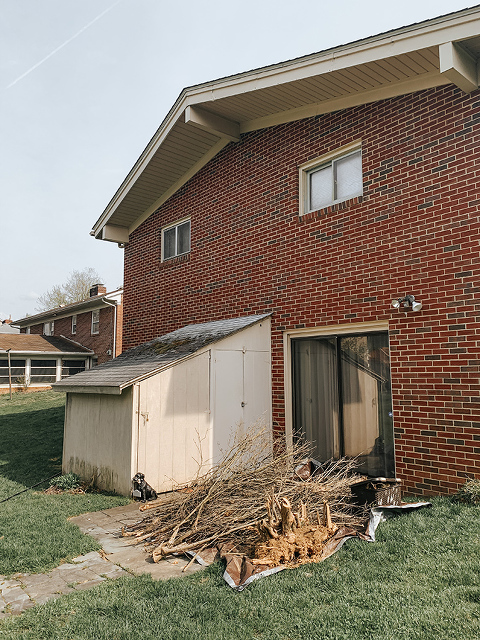 This year, I decided to get really serious about making some functional and aesthetic changes outside, because, as you can see above, it needed it! Truth be told, we don’t spend a large portion of our time hanging out in the yard of our house, and that’s because of the proximity to our neighbors. There’s next to no privacy, so whenever we go out there, we feel like we’re in a fish bowl.

We actually almost passed on the house when we looked at it for the first time back in 2015 because the lot is pretty small and butts right up to all surrounding homes, including the one right behind us in a different cul-de-sac, pictured below. I’ve tried doing cute little things over the years to see if it would encourage us to actually use our full property, like adding a fire pit, but nothing ever got used because we felt so on display. 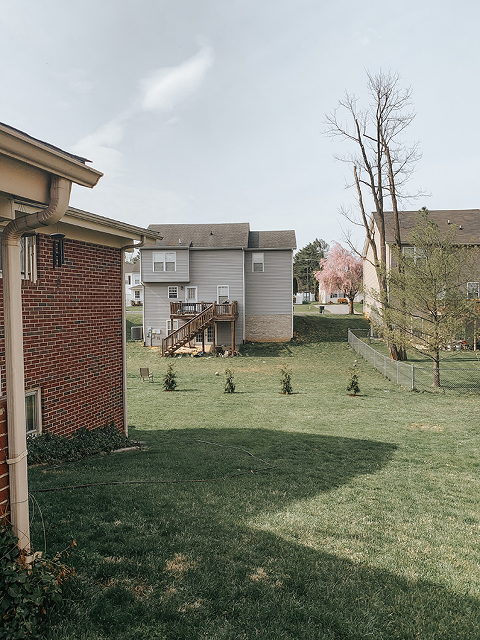 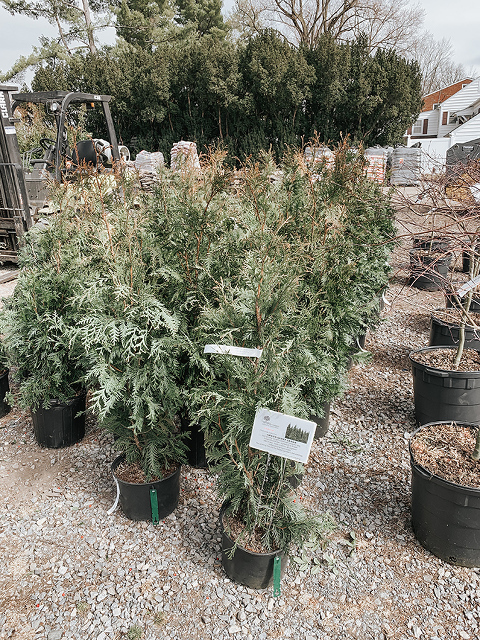 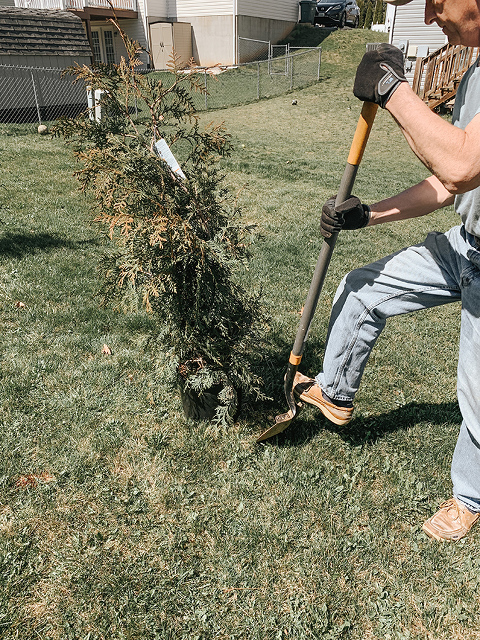 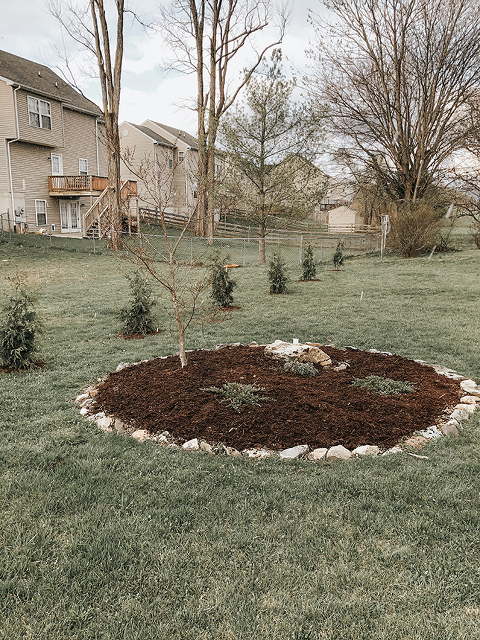 The very first thing we needed to do was add a line of screening trees to give us some much, much-needed privacy from the neighbors behind us. We really should have done this the moment we moved in because they would have been towering by this point, but at least we’ve got them in the ground now.

That photo just above shows our pretty little line of evergreen arborvitae trees right after we planted them back in April (see the light snow flakes falling?!). Our initial plan was to use Leland Cypress, but after doing some research, I heard that those trees are now prone to disease, so we decided to go with something similar, but not Leland, so we didn’t need to stress about potential disease infestation.

We bought our Emerald Green Arborvitae shrubs from Lowe’s because they had the best price and the best type of trees for our spacial needs. We were looking for something that would grow tall, but not too tall. I think it cost around $250 for our seven trees, and these should grow about 15 feet high and four feet wide. We planted them every eight feet or so, that way we’ll have a pretty thick screen once they grow in. 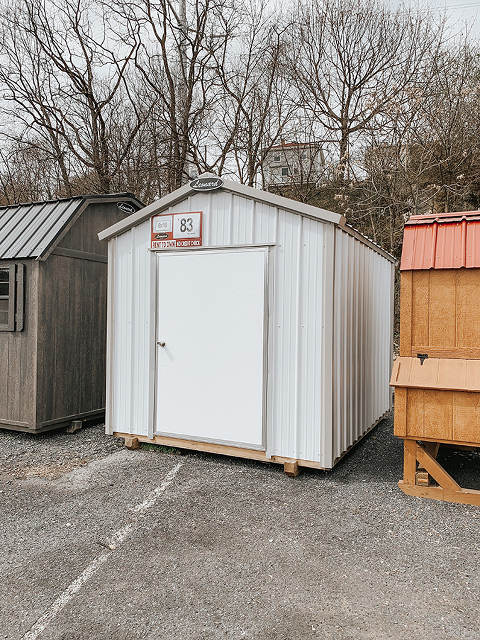 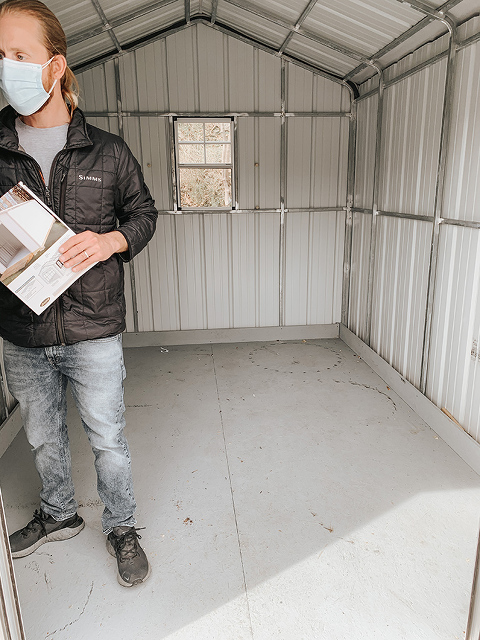 Next up on our list was a shed. If you scroll back up to the top of the post, you’ll see the state of our old inherited shed left behind by the previous homeowners. It worked well for the first four years we were here, but then little things started falling apart on us, and it was just generally in a state of disrepair/rot. We thought about rebuilding it with new siding, but ultimately decided to start fresh because we wanted to move it toward the back corner of our property anyway. There was also something kind of enticing about the idea of getting something already built that could be delivered ready to fill up the same day.

After checking out a couple of places, we decided on a small 6’x8′ metal shed from Leonard. We paid just under $2,000 for our little gray and black shed, and even though we were told it would take 6-8 weeks to arrive, it was ready to be offloaded in our yard within just a few weeks. We really lucked out, and absolutely love the new shed. 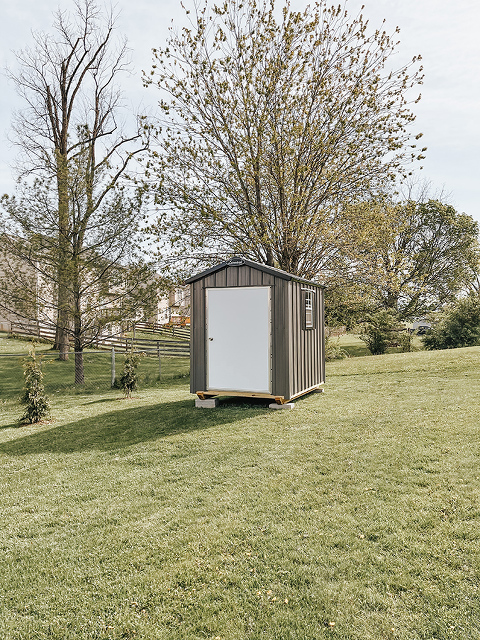 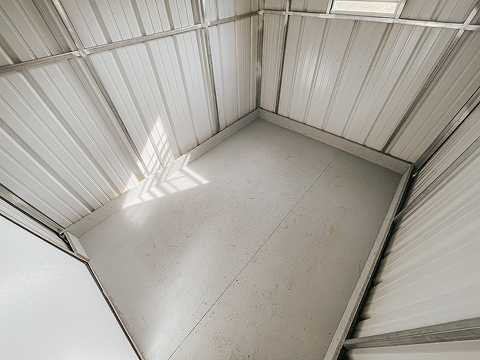 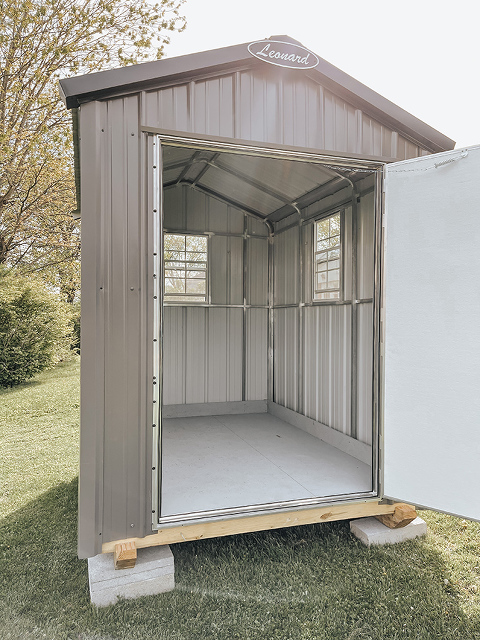 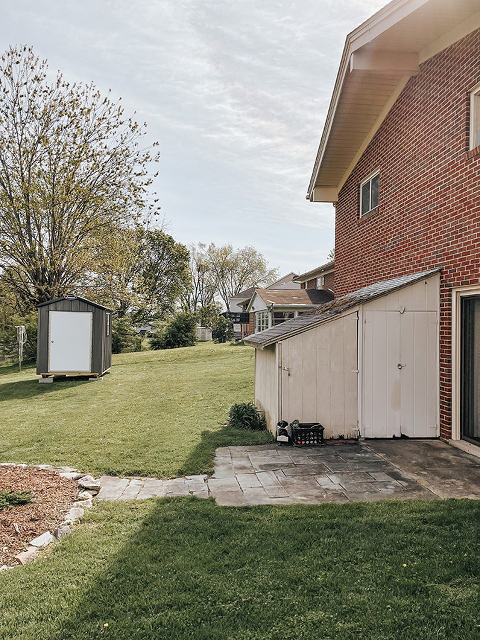 I actually spent a couple of weeks after the new shed arrived customizing it using a few DIY tricks, like repainting the plain white door a nice soft color to match our side door up at the main house, replacing the door handle with something more modern, and laying down vinyl flooring to cover the raw gray plywood. I’ve got a whole post coming next week with the full shed makeover reveal and a breakdown of all the DIY upgrades I made to it, so stay tuned for that.

Anyway, after working on all of my shed customization projects, it was time to officially move all of our tools over to the new shed and demolish the old, crumbling one. Turns out that our “old, crumbling” shed was more well-built then we originally thought, though, because it really gave John and my dad a hard time as it came down. You might be able to see in the photo below that a lot of the supports were in great shape, but we still don’t regret taking it down. The new shed is in a much better location in our yard away from the house, and we still would have had to do a lot of rebuilding on the exterior of the old shed to make it workable for the long haul. 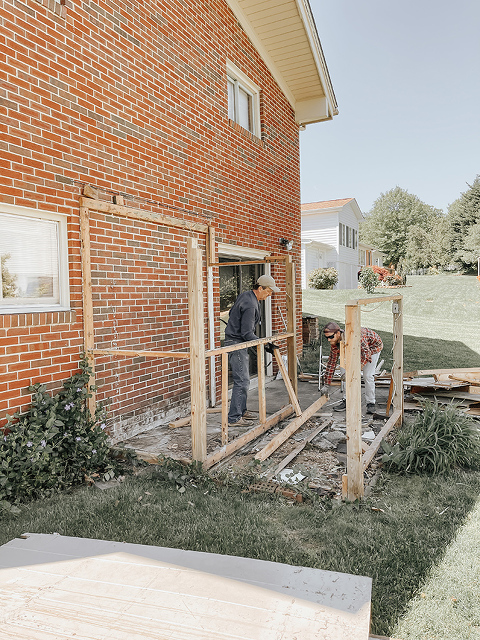 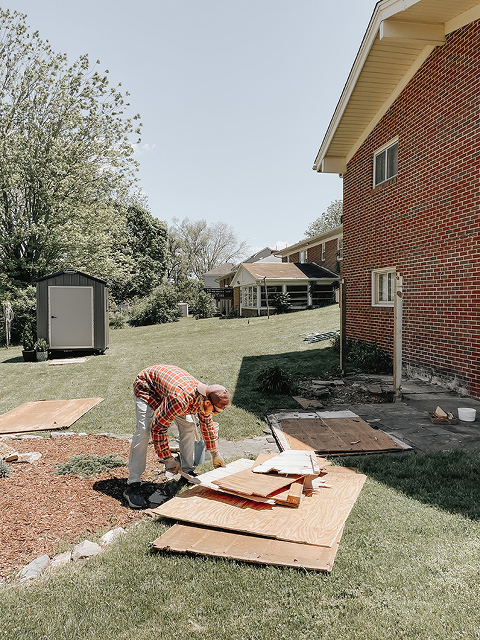 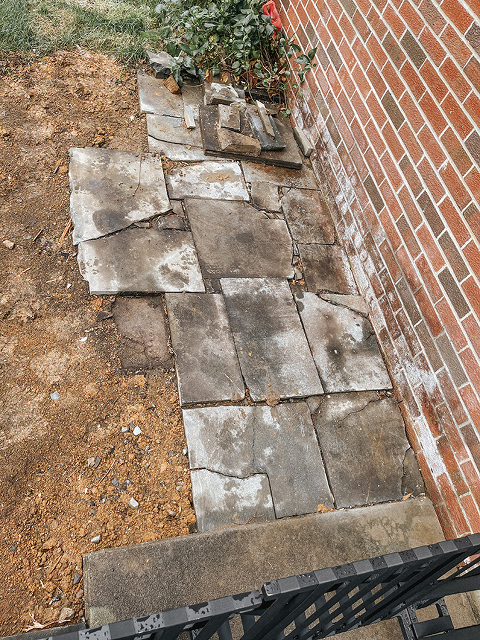 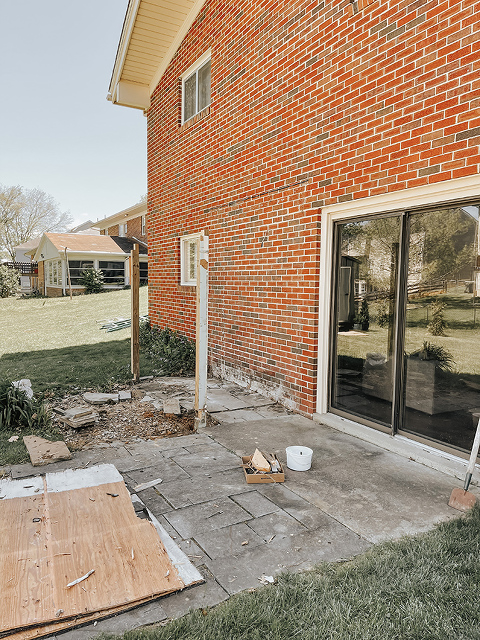 So, now for those long-term plans! The photos below show exactly where we are today: the old shed is gone, the new shed is in place, and we’re in the planning stages of a brand new platform deck that will sit where the old shed used to be. That particular spot sits right outside the sliding glass doors that lead into our family room. We’ve always thought how nice it would be to make better use of that square footage with a small outdoor sitting area, so that’s exactly what we plan to do.

We considered buying more slate to extend the existing slate/concrete pad right outside the sliders, but ultimately decided to go with a small raised wood deck that would help add some contrast and more of a fixed “zone” for our soon-to-be outdoor living room. We plan to build the new deck next to the existing slate since that is so nicely established and still functional. I hired an electrician to install a new outdoor sconce (which is on a Prime Day deal today only, by the way!) and I’ve got our new outdoor patio furniture in storage, so now all that’s left to do is build the deck. 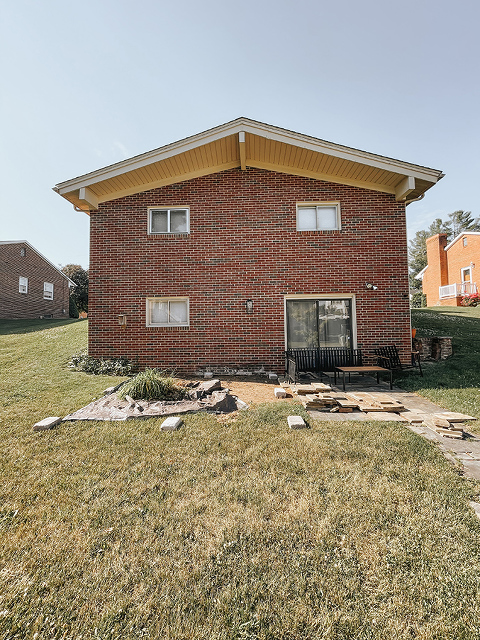 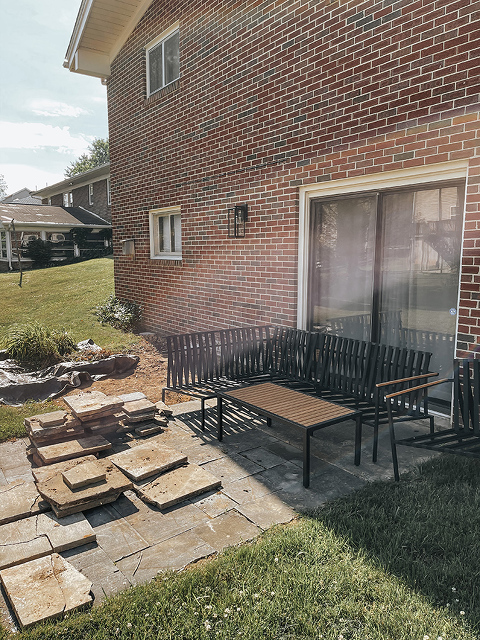 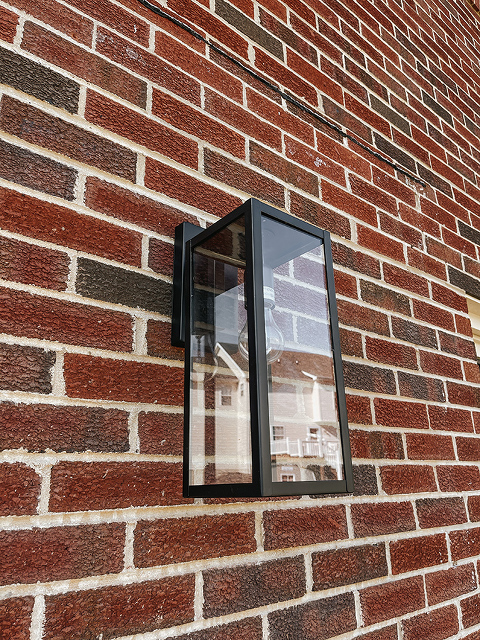 Our plan (as devised by my engineer dad—thanks, Dad!) is to use cement blocks to create a platform for our 12’x12′ deck to sit on, and then we’ll build it up from there with treated lumber. The price of wood has really started to soar, which means we’re now hustling to get all of our ducks in a row so this project can get off the ground—pun intended. Right now, we’re at the point where we’re confirming our plans with the city to make sure we don’t need a permit, and then we’ll be able to get the deck put up, hopefully, some weekend next month. I plan to document the whole process and will write a tutorial, by the way, so keep an eye out for that in August. 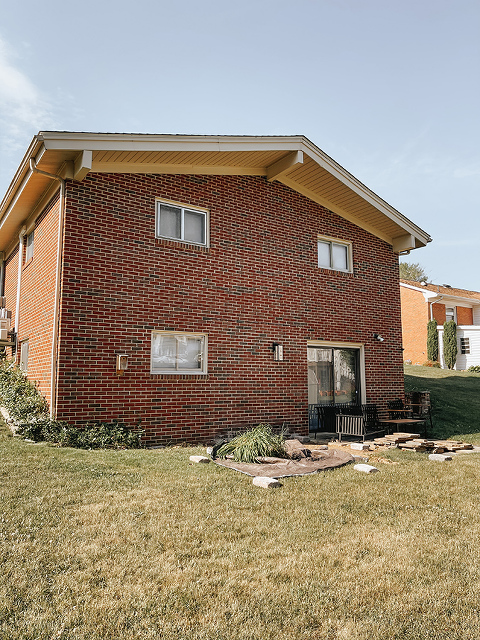 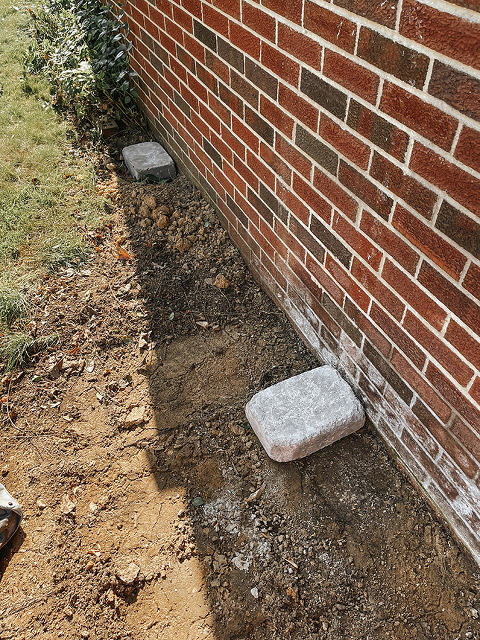 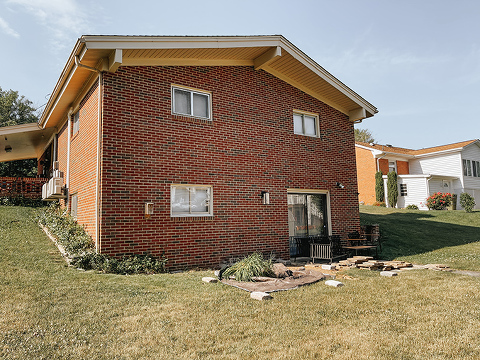 Can you picture it? I’m so excited by the idea of having outdoor living space to enjoy at our house for the very first time since we moved here. In just a few more years, those arborvitae trees will have grown up and (more importantly) grown in, and then we can really relax and feel like we have our own private little oasis in the backyard. I can already see myself lounging on the outdoor sofa with a book and glass of wine in hand. 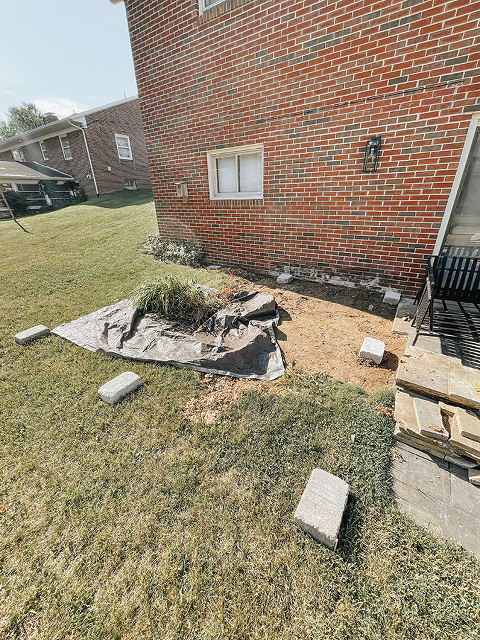 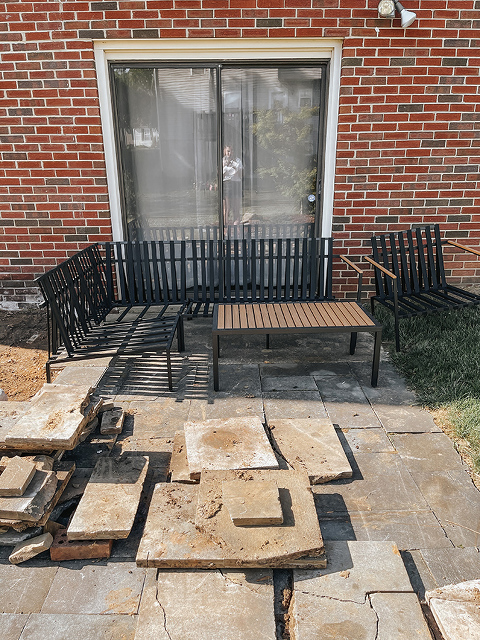 At any rate, those are our big backyard plans! I told you it was a long story. It has been a long time coming, though, so I’m thrilled to say that we’ve “broken ground” on a large portion of the mental list of projects we had in mind. Of course, I told John we could just start with the shed and that I could wait a couple more years for the deck, but now that I see the potential, I’m fast-tracking the plan so we can enjoy the space ASAP. Check back next week for the reveal of our made-over Leonard shed!