Before and After Home Reno Updates: 8 Months In 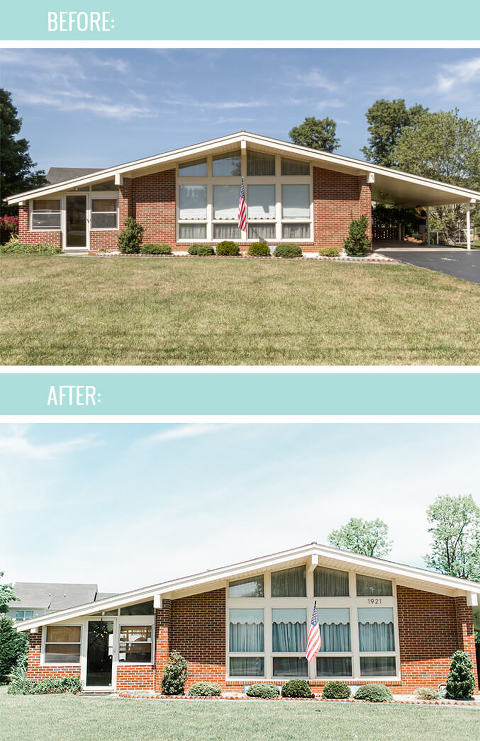 In case you missed it, our full home tour went live yesterday over on Glitter Guide and right here on Dream Green DIY, too. It is so much fun to finally be able to welcome you back inside the house since we moved in last October. I’m sort of a bashful blogger in that I hate to share unfinished or in-progress photos of our house, but now that most of the rooms are at least partially finished, I’m practically giddy to share each and every detail with you guys.

So today, I’m diving down deep into the tour by placing the dreaded “Before” photos right up alongside Andrea Pesce’s much prettier “After” photos, plus I’ll go into detail about what we’ve done in each space to give it our own personal touch. Let’s hop to it!

The Builder of our home is, hands down, the thing I love most about our house. That cool angled silhouette immediately caught my eye while house hunting on Zillow before we even sold our townhouse, and I remember emailing the link to my sister with the subject line, “DREAM HOUSE!” Fast forward eight months, and this really is our dream house. We didn’t have to do much to the outside other than trim up the shrubbery and add in new, larger house numbers. Done and done.

Conversely, I don’t think any room got more of a facelift than our kitchen. We ripped out the old formica counters and shallow sink, and replaced them with new granite counters and a massive single-basin, 10-inch sink. We also tore down the wallpaper, repainted the walls white, and installed a white subway tile backsplash. Although we still need to caulk where the counters meet the backsplash, replace the cabinet hardware, and find a way to update the wooden scrollwork over the sink, the kitchen is one of our favorite rooms in the house. I mean, seriously—that original retro stove?! Be still my heart. 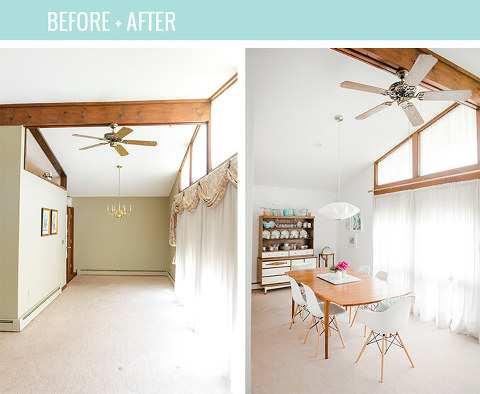 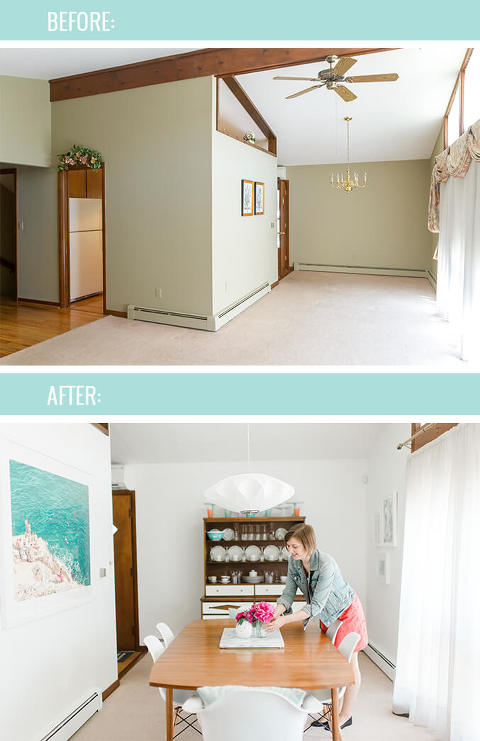 In the dining room, we had all of the walls painted bright white (High Reflective White by Sherwin Williams), and I also tossed out the old drapery that hung down in front of the sheers on the big bank of windows on the front of the house. I still need to replace them with something so that the empty brass rod makes sense, but it doesn’t bother me too much right now.

The biggest update in the dining room was switching out the brass chandelier for a new mid-century inspired fixture. It instantly jazzed up the room, and I love that you can see it from the living room, too. Now to get that old ceiling fan changed out for a new white one… 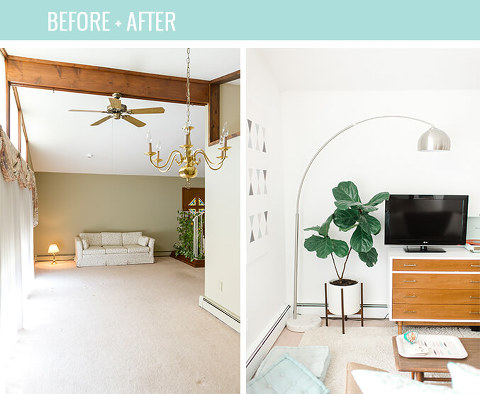 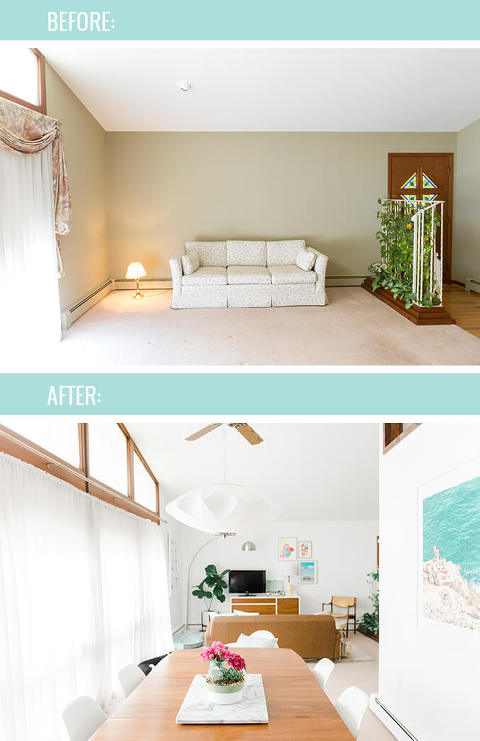 As for the living room, it got much the same treatment as the dining room. We had it painted bright white, removed the dated drapes, and added new art. Other than that, we just had to put our collection of antique furniture in place and were able to call it done! Long term, we’d love to have the carpet replaced with hardwood flooring to match the hallway, but we’re actually sort of surprised by how much we don’t mind the neutral, plush carpet. We’ll get there someday.

One other note here: we did end up taking out the planter room divider after these photos were shot. I hesitated to remove it since I thought it was a cool fixture in the house, but ultimately it got nixed to add more space to the room, and it made a big difference. More details to come on that update soon! 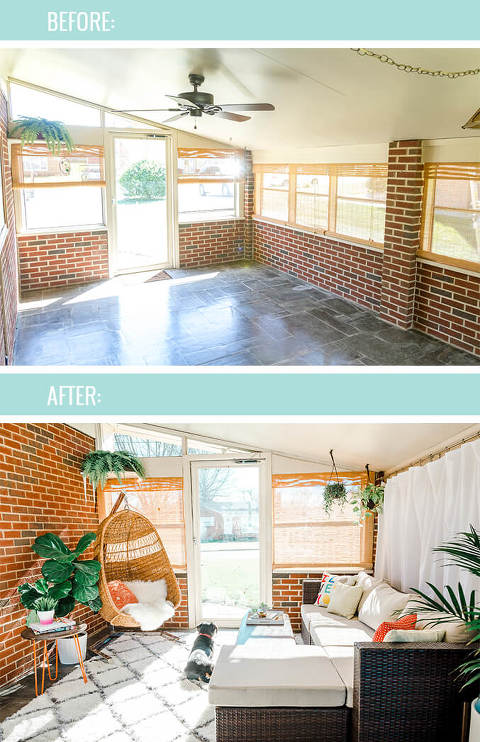 The seasonal porch off the side of the house (the door on the front of our house leads into it) didn’t get any “bone” updates, but it did get a major facelift with new furniture. You can read up on those updates—plus get all of the furniture resources—by clicking here to our sunroom makeover post.

Although it’s pretty sweltering in there in the summer and too chilly in the winter, it’s just dreamy in the spring and fall. Whenever I open the door to go lounge in the hanging basket chair with a book and glass of wine, all four of our pets leap up and stampede through the door to relax on the sectional and shag rug, too. It’s a family favorite all around! Long term, I’d love to paint the brick white, but I’m still working on convincing John to let me do that one. 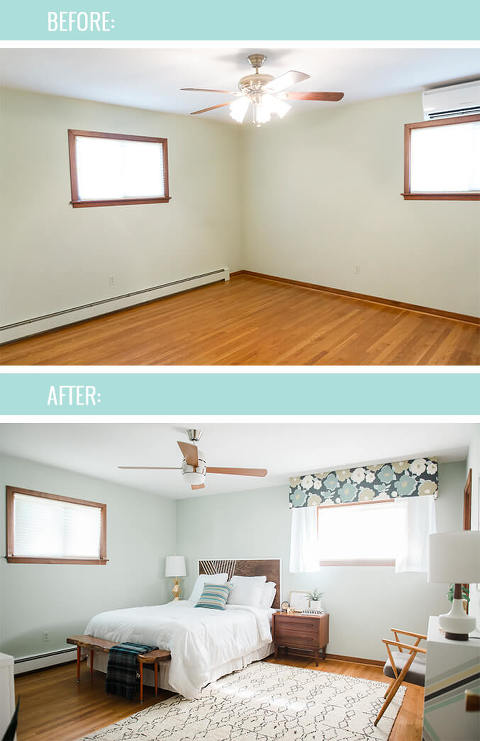 Another room that hasn’t seen too many updates overall is our bedroom. John put his foot down over the paint color in this space, so we ended up leaving its original sage/mint green color as is. I would have initially loved to paint it white to match the rest of the house, but I’ve come to really, really adore the green color. It’s just so calming! I think John was right on this one.

As for the few updates we did make, I added a DIY upholstered cornice board to cover the AC wall unit over the window (still need to make a second one for the other window), and we replaced the dated ceiling fan with a new one from LampsPlus.

Before we moved into the house last year, I decided to make the smaller of the two extra bedrooms my office so that the larger one could be used as a spacious guest room. Post-move though, I asked John to help me switch them because the larger room gets much better light throughout the day and I needed to capitalize on that or else I’d go crazy working from home. Happily, it turned out that the guest room fit just perfectly in the smaller room. All it needed was a mattress and antique bed frame (picked up for $75 from Queen City Marketplace in downtown Staunton), a simple nightstand snagged from another antique mall, and a mid-century bookshelf that we took from my parents to hold extra linens.

In terms of renovation, we switched out the overhead light for another LampsPlus ceiling fan to match the one in the master bedroom, and I painted the walls—you guessed it—bright white. I also added soft gray curtains from Target around the window. It’s a simple room, but I love the pops of bold pink and blue against those white walls and linens. 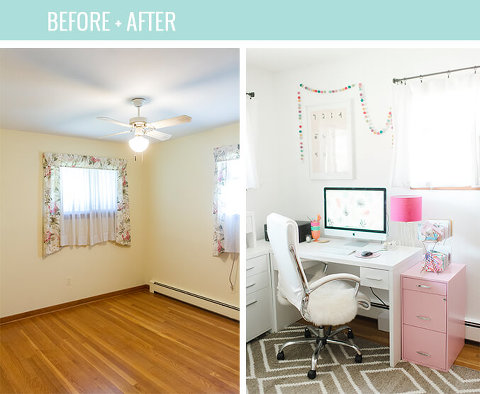 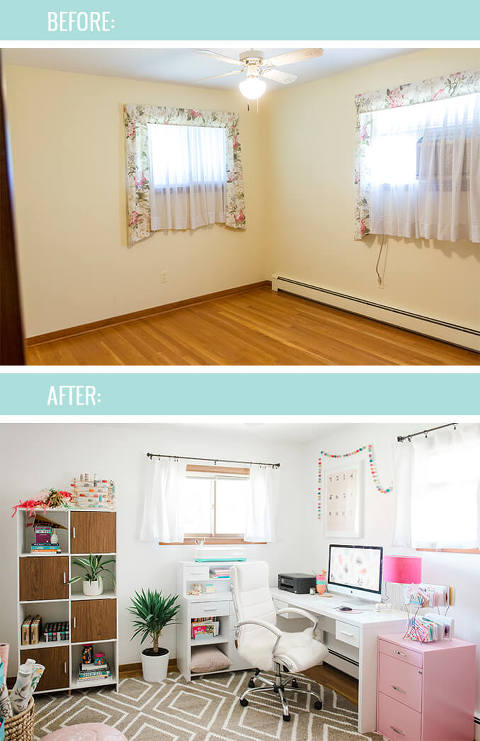 As it turns out, an office needs a lot of stuff! So I’m really glad that I decided to move my workspace into the biggest spare bedroom. The double windows let in ample amounts of natural light all day long, plus the extra square footage means that I have room for a big corner desk, filing cabinet, and a few other storage units for my craft supplies, too. You can read all about my office makeover (including resources) by clicking here. 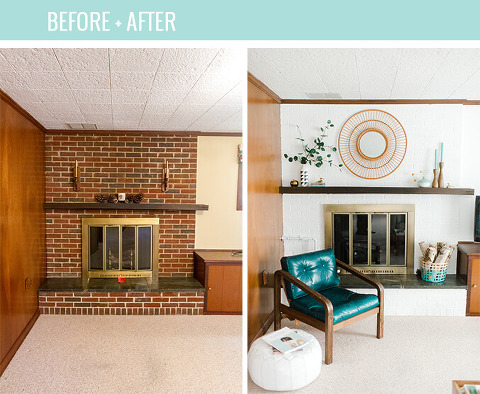 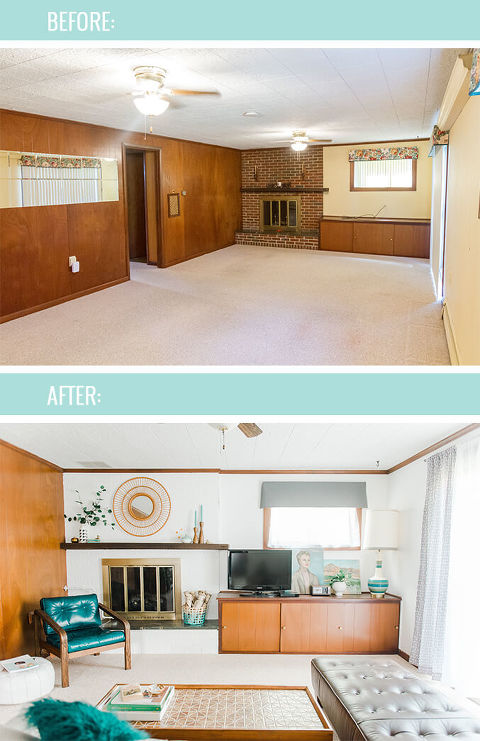 Finally, we turn our attention to the lower level den. This room has been the biggest money pit of all thanks to several unexpected projects, but it has also turned out to be the most value-adding space in the house. First up in a string of fated budget-busters was the fireplace. When we first moved in, our inspector noticed that we needed to have the chimney swept. It used to be a wood-burning setup but had been changed over to gas probably 20 years ago. After having a pro come take a look, we found out that we needed to have the chimney swept and that we also needed to replace the entire gas insert with a new one.

About $1K later, we have a new gas fireplace insert under a sparklingly clean chimney. Unfortunately, the gas plumber wasn’t able to run the gas pipes through the fireplace brick without triggering a major renovation, so he snaked them in front of the brick over to the paneled wall and into the furnace room beyond. To hide the unsightly exposed pipes, we painted the fireplace and pipes bright white, and I think we’re good to go. What do you think? You barely notice the pipes off to the left behind the teal leather chair in those photos above, right?

In these photos above and below, you probably won’t think we did too much to the other side of the room other than paint the drywall bright white and create an at-home movie lounge with bean bag chairs and a projector, but if you were to come visit the house right now, it would be a different story because of the second disaster to hit the den. We found out some months in that our cat had channeled all of her anger at being moved across the state right into the berber carpet. In other disgusting words, she marked the heck out of it. Although we had the carpets professionally cleaned multiple times, it was hopeless.

Another $1K later (plus some), the carpets are gone and new laminate flooring has been laid in place. This update is definitely something I wanted to happen eventually, but I didn’t think it would have to happen for some time so that we could build our savings back up post-fireplace. In the end though, the room is better for the updates so we’re just happy to be adding more value to the house overall. By the way, I’ll be sharing the full before and after of the floors in its own post very soon! 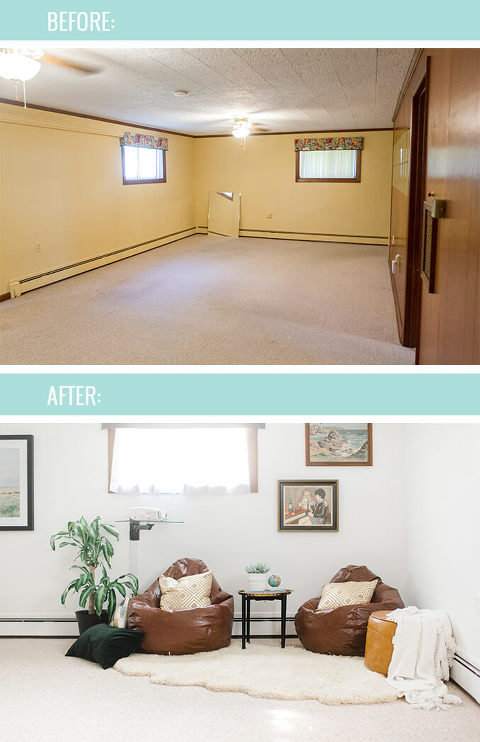 And there you have it. Our home has come a long, long way in just eight short months, but frankly, we have a long, long way to go. The good news though is that this house is our forever and ever home, so we’re going to take our time and enjoy making updates as time and savings allow. What do you think? Is there anything you would have done differently? Got any ideas of your own to share? We’re all ears!